Australia’s competition regulator plans to wrest open the “cosy oligopoly” of the country’s four largest banks and punish misconduct via the courts, saying competition is the best way to fix the troubled sector.

In an interview before the publication of a public inquiry report into the finance sector on Monday, Rod Sims, chief executive of the Australian Competition and Consumer Commission, said more competition was needed to protect consumers.

Australia’s four biggest banks — ANZ Bank, Westpac, Commonwealth Bank of Australia and National Australia Bank — control more than 75 per cent of the domestic market. They enjoy lower funding costs than smaller competitors, due in part to an implicit government guarantee to save the banks if they get into trouble.

“Market economies only work properly if you have competition and we have to make sure there is more in banking,” Mr Sims told the Financial Times. “We have to fix the cosy oligopoly,” he said of the Big Four. “They have to feel under threat.”

Mr Sims said that, in hindsight, regulators should never have allowed Westpac to merge with the St George Bank in 2008, adding that the latter was big enough to be a disrupter. “I think that was unfortunate,” said Mr Sims, adding that he was not the ACCC chief at the time.

He said that even if the government removed the Big Four’s guarantees, it would still have to ensure these “too big to fail” banks remained safe and secure.

The ACCC is working with other regulators to ensure the requirements for bank capitalisation do not benefit the Big Four to the detriment of smaller banks. It is also conducting a rolling series of market studies into the sector to identify regulatory and legislative solutions to boost competition in the sector.

Mr Sims said new financial technology challengers were not yet mature enough to fix the competition problem in the market. He said it was unclear whether these fintech companies wanted to compete directly with the big banks, or whether they preferred to work with them or be bought by them.

The Hayne commission, which inquired into the financial sector, has detailed widespread misconduct by banks and failures by regulators. An interim report by the commission last year detailed how the big banks and advisory institutions ripped off customers by charging fees for no service and providing poor advice.

The final report is expected to lay out recommendations aimed at reforming prudential and market conduct regulators, which have been heavily criticised for failing to stand up to banks and rarely taking court action to publicly challenge behaviour. 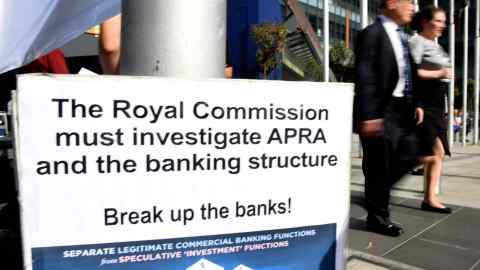 The ACCC has not traditionally focused on the finance sector but the government recently directed it to target the industry in light of the level of revealed misconduct.

Mr Sims said he could not comment on how other regulators performed their duties but added he did not think much would change for the ACCC following the inquiry.

“We don’t get too close to companies and we are sceptical,” he said. “We also take the view we aren’t the compliance departments of companies. It’s their job to comply with the law and if they haven’t and there is sufficient evidence then we go to court.”

Mr Sims cited the ACCC’s continuing prosecution of Citigroup, Deutsche Bank, ANZ and six of the country’s top bankers on charges of criminal cartel conduct as an example of how his office already had a tough attitude to enforcement.

All three banks denied the allegations.

“This is an important and complex case,” says Mr Sims. “I think the banking sector does need a message about the ‘cosiness’. They copy each other, they don’t compete on price, they try to maintain prices and don’t chase market share.”