Harbour Arts Sculpture Park — the shape of things to come?

Located on Hong Kong’s waterfront, the project aims to bring art to the widest audience

A white horse stands quietly on its own patch of newly laid grass in the middle of Hong Kong. A group of schoolchildren, cross-legged on the ground, are intent on their Play-Doh modelling of the large teddy bear in front of them, apparently created from black rubbish bags. A set of delicate birds perch on high poles, vainly stretching towards the skyscrapers around them. A giant multicoloured pumpkin settles flatly into its grassy bed, in prime position against the dramatic harbour view.

These are just some of the pieces — respectively, by Mark Wallinger, Gimhongsok, Tracey Emin, Yayoi Kusama — in Hong Kong’s first public open-air sculpture show, which stretches along the prime waterfront of Tamar Park. In this narrow grassy stretch between the water and the mountain range of shiny modern towers some 19 artists are represented, from seven nations; the aim of co-curators Fumio Nanjo, director of Mori Art Museum and director of the international programme at Hong Kong Art School, and Tim Marlow, artistic director at the Royal Academy of Arts, is to use the powerful site to bring top-flight but accessible contemporary work to the widest audiences.

Partly for this reason, and partly because of sensitivities about the famous harbour view, the works are on a very human scale: Antony Gormley’s moody 6ft steel-block figure, “Daze VI”, gazes out at the passing boats; Kacey Wong’s “Asteroids and Comets” invites people to nestle into its abstracted body shapes; Gimhongsok’s black bronze teddy, “Bearlike Construction”, is a child-magnet; and families picnic under the elegant bronze angles of Conrad Shawcross’s “Paradigm Study (solid)”. Their evident enjoyment and ease with the works is the best evidence of the park’s success.

Marlow explains, as we wander around watching eager bands of schoolkids cluster around some of the sculptures, that he was especially keen to ensure that Hong Kong artists such as Wong were well represented. “It’s a growing scene here,” he says, “and getting more interesting all the time. It’s important to give the artists from here a showcase.” His only regret, he adds, about the five local sculptors included is that none of them is a woman — “but we aim to change that next year.”

He is determined that there will be a next year. The project — created under the auspices of Hong Kong Arts Centre and supported by a wide range of the city’s institutions — is one that he hopes will change public perceptions of art and its accessibility to a wider public.

Public art is a powerful issue in Hong Kong at the moment. As the city’s commercial art scene revs into an even higher gear with the opening of giant new galleries, and recent art market reports suggest that the Asian market has moved into second place in the world (behind the US but topping the UK), Hong Kong’s public arts are in danger of lagging far behind. The mighty M+ museum, a huge public project whose jutting construction site is visible across the harbour in Kowloon, is delayed and not due to open until next year.

So the Harbour Arts Sculpture Park is a significant gesture, especially in this week of frenzied buying and selling of art, sitting as it does neatly between the gleaming white marquees of Art Central, a substantial fair in its own right, and the swooping roof of the Convention Centre that houses the larger Art Basel Hong Kong. It is, as Marlow says, an important beginning. 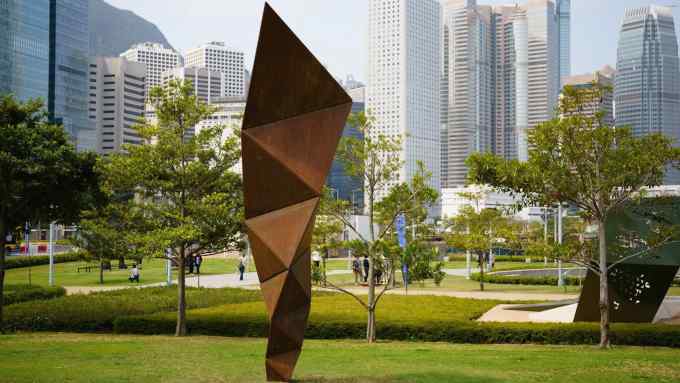