When tax investigators raided the Montreal offices of Uber in 2015, it marked a flashpoint after years of tension between the ride-sharing service and authorities in Quebec. Eventually, the Canadian province’s government issued an ultimatum: Uber and its drivers must become fully tax compliant or be barred from operating in the jurisdiction.

At that point, Uber approached Nicolas Cloutier, a taxation expert at the law firm McCarthy Tétrault in Montreal. The challenge was how to ensure that Uber’s thousands of drivers — who at the time filed their taxes independently — all paid what they owed.

After studying the question, Mr Cloutier realised that a platform like Uber might be suited to attempt a solution that he believed had never been tried.

Canadian court rulings had confirmed that revenue authorities could be bound by a contract to collect tax in a specific way. Mr Cloutier proposed a deal to Revenu Québec, the province’s tax authority, under which Uber would use the data that it had already collected to calculate the tax owed for each trip and pay the government a sum every quarter.

After some difficulty in getting all its drivers enrolled, Uber says the system was running smoothly by early 2017. Making Uber the go-between for its drivers’ taxes saved the province from having to assess thousands of individual contractors, relieved the drivers from onerous paperwork, and allowed Uber to continue operating in a market of 8m people.

“You come up with ideas like that when the clients are open to original solutions and allow you to try things that are unconventional,” says Mr Cloutier. He credits Uber with delivering the functionality to make a novel legal idea work in the real world. “The technical people there never said ‘no’,” he says.

Nicolas Chaput, legal counsel at Uber Canada, says that the McCarthy team was notable for embracing a tech solution to a legal problem. “They understand our technology,” he says. “It’s not something you see very often from lawyers.”

That may soon change, however, as the combination of legal expertise and technical knowhow becomes an advantageous skillset for lawyers in attracting clients and solving their problems. “Lawyers need to know how to work with computation thinkers and they need to be team players in coming up with innovative solutions,” says Gillian Hadfield, professor at the University of Toronto Faculty of Law.

The marriage of technical and legal innovation at Uber in Québec has since been adopted by Airbnb, the vacation rental platform, and put forward by the province’s government as a preferred solution for companies in the sharing economy. In the case of Uber, McCarthy delivered specifications that Uber’s technical team undertook to meet. But in other instances, lawyers themselves are providing the technical expertise for clients.

The in-house team at Siemens Canada had long been interested in whether legal software could speed up their work without compromising quality. A lawyer at Blake, Cassels & Graydon suggested that it might learn most by experimenting on an actual transaction. When a suitable mergers and acquisitions deal arrived at Siemens, the company chose Blakes to represent them.

“Blakes really stepped up with some proposals as to what technologies we could try. That was probably the decisive factor on which firm we picked,” says Richard Brait, general counsel for Siemens Canada. Mr Brait was impressed that Blakes could assess the many offerings in the legal software market, and had plans for rigorous tests for how the tools worked.

“It is a real task to sort through the things that just look cool versus things that are actually helpful,” says David Kruse, a partner at Blakes, who worked with Siemens on the transaction. The firm has full-time lawyers whose role is to keep abreast of legal technology, meet promising start-ups, and know what is coming before it reaches the market. When many firms can offer top-flight legal services, technology can be “a differentiator from a market point of view”, adds Mr Kruse. 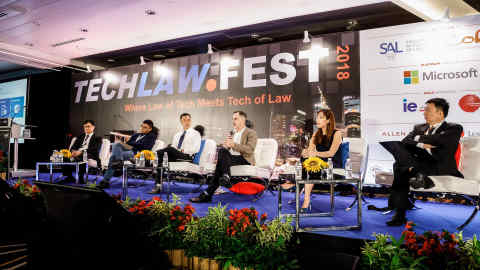 Some lawyers are assessing which skills they may need to learn in the future. McCarthy’s fintech group joined up with OpenLaw, a start-up group working to apply blockchain technology in the legal sector. They worked together to write a loan agreement as a smart contract on the Ethereum platform.

“Our clients are certainly very interested — and have also struggled with understanding what a smart contract really is,” says Ana Badour, a partner and co-head of McCarthy’s fintech group. “Now we have something that we can show them.”

Equally, she adds, the smart contract offers an opportunity for the lawyers to learn too. One challenge was mastering a new coding language that OpenLaw has created specifically for writing contracts.

Ms Badour has taken computer science classes, and another lawyer on the team had an extensive coding background. Ms Badour can envisage a future in which legal teams will include specialists in writing contracts as code — but just not yet, she adds.

Aaron Wright, co-founder of OpenLaw and professor at Cardozo School of Law in New York, agrees that widespread use of smart contracting technology is not imminent in the legal sector but warns that lawyers cannot afford to fall behind.

“We’re talking about institutions that have been around for decades or hundreds of years,” says Mr Wright.

“They don’t want to be caught flat-footed.”