The idea of robot teachers sounds like a plot for Black Mirror, the techno-dystopian Netflix series, but some education experts believe they can complement humans, especially for disadvantaged children.

“They are social but not overly complicated, so for those who have trouble with social communication, or have sensory processing disorders . . . a robot has enough interaction to keep them engaged but not overwhelmed,”

Because robots are more predictable than humans, some children “find it easier and less threatening to work with robots to improve their social and imitation skills”, says Maria Jose Galvez Trigo, a researcher at the University of Nottingham’s school of computer science.

A robot called Milo, for instance, teaches students with autism to tune in to emotions, express empathy and better understand social situations, while Kaspar, a companion robot, has simplified facial features that are easier for autistic children to understand than humans. One study showed that children with autistic spectrum disorder exhibited more interaction when an educational robot was introduced compared with learning sessions with a person.

Robots, equipped with artificial intelligence, might be better than humans at detecting a child’s emotional state and quality of attention. For example, while looking away from a textbook or whiteboard might indicate disengagement, there is a more complex relationship between attention and visual gaze.

“Let’s say I’m tracking your [visual] attention and I notice a dip, but your cognitive performance is going strong,” says Ms Boccanfuso. “You may be looking away from your screen or paper, or playing with a pencil, but you are processing, and you just need to disconnect from the screen or page.” ABii can track the past and present correlation between paying attention and performance.

Kids struggle if they don’t master a subject and see their peers mastering it. With robots, they don’t worry about the social aspect of being judged

Conversely, robots could identity when a student is frustrated. Ms Boccanfuso, whose academic research focused on physiological manifestations of stress, received a National Institutes of Health (NIH) grant to develop thermal sensors that monitor signals such as breathing, heart rate and body heat. These allow ABii to identify when a student is feeling stress or suffering other distracting mental states.

“If you start to lose attention and your performance is degrading, the robot can stop the lesson and provide the opportunity for a ‘brain break’, like a breathing exercise or stretching for 15 seconds to refocus your attention,” Ms Boccanfuso says.

She believes that too little attention is paid to such “learning readiness” factors — the ways a child’s emotional and physiological state enables or constrains their ability to study. This might include shyness at asking or answering questions in class, or demonstrating a skill to a group. “Kids struggle if they don’t master a subject and see their peers mastering it. With robots, they don’t worry about the social aspect of being judged,” Ms Boccanfuso says.

There is a long history of robots in education, including work by the late South African computer scientist Seymour Papert, after whose book, Mindstorms, Lego named its range of robotic educational toys.

Contemporary edu-bots include Nao, a humanoid model from the robotics arm of Japan’s SoftBank, which has been customised and put to use in an autism specialist school. Others include Wonder Workshop’s robot Dash, which teaches children to code.

However, integrating new technologies into classrooms has presented challenges, including inadequate teacher training and financial costs. Experts have identified a gap between the tools that product developers are offering and what schools really need, while others worry that, in areas such as virtual reality, more attention is paid to usability than on learning outcomes.

Robotics experts have recognised past challenges and want to ensure their products are co-designed with educators and made part of the teaching process, rather than a standalone novelty.

ABii, for instance, produces data that teachers can consult to understand how their student is progressing. “Teachers love the fact they have this device that is pedagogically in line with what they are doing in the classroom,” says Ms Boccanfuso. “This robot can produce data that shows the students’ attention levels, what days they perform best, what are the optimal learning times for this student.”

Edu-bots are also becoming more affordable, partly thanks to public funding. For ABii, funding from the South Carolina Department of Education was conditional on making 120 robots available to disadvantaged schools in the state, and at $1,000 per robot including all relevant curriculum information, Ms Boccanfuso believes it can be accessible on a broader scale. “With so many state and federal grants, we can usually find a funding instrument they can use to make it a reality.”

While robot use-cases such as coding have their place, Ms Boccanfuso sees robots helping to address fundamental deficits in the US education system. “We have a specific pain point in reading and maths, that has a direct influence on quality of life, and our mission is that realm.” 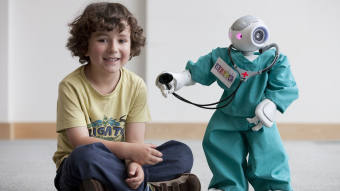