Fakes give Alibaba chance to turn crisis into opportunity

A collision last month between members of the International Anti-Counterfeiting Coalition (IACC) and ecommerce giant, Alibaba, is a tale of high emotions, larger-than-life characters and festering animosity between brand owners and the world’s largest online platform. Beneath the noise, however, are serious questions of how to cope with an ocean of fakes.

Courts worldwide are grappling with whether to place the burden of policing online counterfeit on platforms, rights owners or both. Brand owners chafe at having to commit vast resources to policing online platforms. Platforms protest that filtering every transaction and trying to determine what is counterfeit across all industry sectors is mission impossible.

We have been here before. The same problems plagued eBay. In 1999, I faced the company’s deputy general counsel, Jay Monahan, in a windowless law office in New York on behalf of a number of luxury brands. Rights holders were concerned that eBay was fostering an environment friendly to fakes. Mr Monahan was grappling with demands to rid eBay of deceptive offerings. To delist high volumes of fakes and avoid endless litigation, we had to to work together: we hammered out a constructive co-operation which has endured. How did eBay do it? By ceaselessly monitoring the seller listings on their back end and by putting extraordinary resources into developing cutting edge tools and strategies, including smart filtering, possibly the first notice-and-take down procedures for trade mark violations, stringent measures against repeat offenders and — crucially — fast response times (usually within hours) to take down notices. These methods were revolutionary then and still provide the gold standard for online retailers.

Meg Whitman, eBay’s chief executive at the time, understood that credibility with brand owners is key.

The company faced a choice: do as little as it could hope to get away with, or back up its rhetoric with breakthrough technology and procedures. By opting for the latter, it spawned an era of voluntary co-operation with brands.

Alibaba finds itself at a similar crossroads. The Chinese company has become the world’s biggest retail online platform. Its chief executive Jack Ma was appointed to David Cameron’s business advisory group, met US President Barack Obama and Alibaba was invited to join the IACC.

This invitation, though, sparked outrage among members, with Lee Sporn, general counsel to Michael Kors, stating: “The IACC has chosen to provide cover to our most dangerous and damaging adversary.” Gucci, Michael Kors and Tiffany resigned from the anti-fakes group. Alibaba’s membership was revoked and Mr Ma cancelled his keynote speech at the IACC’s annual conference. Alibaba’s charm offensive lost its way. There is a way back however. If Alibaba develops modern weapons for the current online environment, it has the potential, like eBay, for constructive co-operation with brand owners. 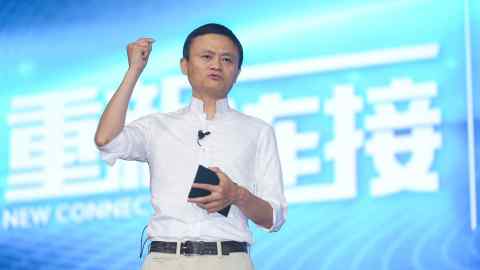 Pirates are more adept at using new technologies than those trying to shut them down. This has turned the fight against counterfeit sites into a “whack a mole” game. Take down a pirate page and an identical one pops up in a new location. Michael Evans, Alibaba’s president, has asserted, however, that Alibaba has “the tools to change the way this war is waged . . . using data and technology . . . to defeat the counterfeiters”. Rights holders are understandably keen for Alibaba to demonstrate the advanced tools of which it speaks. At a meeting last week, a group of British brand owners presented Alibaba with a wish list including notice and trackdown, digital fingerprinting and a piracy indicia module for red-flagging offenders. Such tracing parallels the fundamental “follow-the-money” principle. The meeting concluded on a positive note. If Alibaba delivers, it will be a game changer by stopping counterfeiting at source rather than at platform level.

Alibaba’s implementation of any new voluntary measures must be swift and rigorous. If not, courts and legislators will be pressed to act. Alibaba should not waste a crisis. It can turn it into an opportunity.