An app to prove coronavirus immunity; a system to process online signatures; and platforms to co-ordinate pro bono legal aid: these are some of the projects being tackled in a legal hackathon launched by the FT last month.

More than 2,000 participants have registered from nearly 70 countries, coming together to solve urgent problems arising from the coronavirus pandemic.

The hackathon has been a big test for virtual collaboration: 148 projects are under way so far, with teams spanning countries, companies and sectors.

The hackathon started on April 27 online and will run until May 22. Organised by Global Legal Hackathon (GLH), and supported by FT Innovative Lawyers, the hackathon brings together legal professionals, software developers, designers and businesspeople to develop answers to problems identified by organisations, governments, and individuals.

Everybody is enthusiastic, says Amy Kläsener, partner at Dentons in Berlin. “But building a global team — we have people from Vancouver to Singapore — purely virtually across organisations and time zones . . . really is a unique challenge”.

Ms Kläsener is leading a project to develop an app that will certify the user’s immunity to coronavirus. Building on the work of the Iota Foundation, a non-profit specialising in data validation, the idea is to use digital credentials to facilitate travel and get people back to work while protecting the vulnerable.

Both Dentons colleagues and clients have been involved. “It has been great to work with clients, but you don’t know them as much as you know your own people,” Ms Kläsener says.

Using Slack to keep in touch has been a new experience for Ms Kläsener, while the number of people involved has complicated phone communication. “You can’t get everybody on a call at the same time, so we have split into workstreams, which are smaller groups,” she says.

Her hope is that leaders will emerge from these groups to drive the project forward. A demonstration app already exists, and the goal now is to clear the barriers standing in the way of adoption.

Pro bono advice is the focus of other projects. One of these, devised by field legal adviser Zoe Perez, aims to make such help more accessible to refugees and asylum seekers. They are among the most vulnerable groups during the current pandemic, she says.

Ms Perez came up with her idea, a database to offer legal aid and guidance on the asylum process, while working at a refugee camp on Lesbos, Greece. She saw how high demand coupled with frequent turnover of lawyers meant asylum seekers struggled to get the advice they needed. “It’s super-inefficient,” Ms Perez says.

She recalls one asylum applicant from Cameroon who failed his first interview because he had not disclosed that he was gay, despite this being the reason he had left his home country. “Just a 15-minute conversation with a lawyer would have solved this instantly,” Ms Perez says. Her database aims to provide such guidance.

Ms Perez has a team of seven on her project and is glad to be gaining fresh perspectives from different areas. “A lot of people are interested in this,” she says. “It’s just that humanitarian work is often very badly organised.”

Though she adds that the lack of a developer is a “real challenge”, the goal is to create a video pitch at the end of the hackathon, ready to present to universities and law firms that could move the platform forward.

Another pro bono project is being led by Justice Adda, an India-based social venture dedicated to improving access to justice.

“Medium and small businesses have been particularly hit by the [coronavirus] crisis in India,” says the venture’s founder, Siddharth Peter de Souza, who is currently studying for a PhD in Berlin. “A lot of start-ups have had to lay off people. We wanted to create a support network.”

“While we have skills internally, we thought we could use the support from across the world,” says Varsha Aithala, his colleague on the project, in Bangalore. Through the hackathon, “we have designers, practitioners . . . it’s a good mix”. Their ambition is to develop a workable plan of action, before approaching Indian law firms.

Ideally, Mr de Souza says, there would be a way for overlapping hackathon projects to collaborate: “There are a couple of others looking at the pro bono gap, so different challenges could interact.”

Many projects reflect the move towards new ways of working that has been accelerated by the pandemic.

Electronic signatures have been around for some time, but since much of the global workforce began to work remotely during the crisis they have become a necessity for the legal sector.

A project led by start-up incubator Barclays Eagle Labs, involving several law firms, aims to create a framework to address the legal and operational complexities surrounding e-signatures. For example, there are many types of e-signature and each jurisdiction has its own regulations.

“There’s a real appetite to adopt new technologies in a way they haven’t been doing before,” says Christopher Grant, head of lawtech innovation at Barclays Eagle Labs. “E-signing is a simple one in terms of the concept, but the technicalities of getting it over the line is a challenge. A group of people doing it together helps to do it at pace.”

E-signing is a simple one in terms of the concept, but . . . getting it over the line is a challenge

A core team of 15 joins daily calls, with an extended team working online via the GLH website. “We decided to keep it as low-tech as possible, so simply a call, and some quick email summaries every day and we send different tasks,” says Anthony Vigneron, director of legal technology solutions at Clifford Chance. He hopes the team will be able to create a draft framework to guide people on best practice.

In Lesbos, Ms Perez grew used to working in a state of emergency. “We always had to work fast, to think of an idea fast,” she says. She sees the hackathon as a way to foster this mindset, to help people to find solutions quickly.

For many, it is an opportunity to make a difference. “It’s not just that it’s a nice challenge, it’s something that really means something to people,” says Ms Kläsener of her project. “As a litigator I’m always cleaning up messes in the past; it’s very rare that I get the opportunity to engage in the creative process and create something that will improve other people’s lives.” 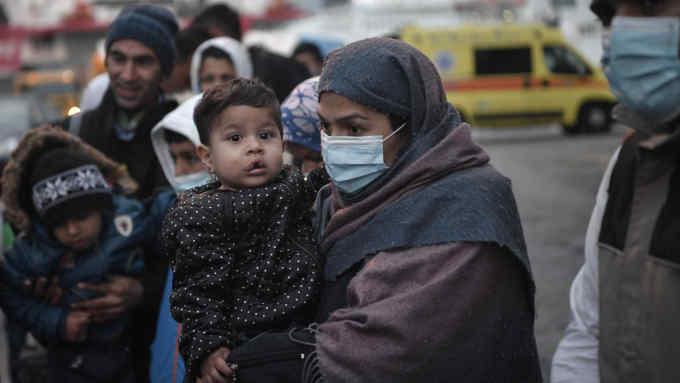