Consumers less willing or able to stump up for the cost of buying battery cars, says Auto Trader

The number of people in the UK planning to purchase an electric vehicle has collapsed as the pandemic squeezed finances for potential car buyers, according to a leading online automotive portal.

A survey by Auto Trader of 2,300 consumers in January found 16 per cent were planning to buy a battery-only car. But in an August survey of 2,700 people, just 4 per cent were considering a pure electric car.

Yet almost half of those surveyed by Auto Trader last month who had decided against buying an electric car said changing personal finances meant they could no longer afford the money needed to buy the vehicle at the outset.

One-fifth said they were concerned about spending the money given the economic outlook.

“At a time of economic uncertainty car buyers are reverting to the type of vehicles they are more familiar with, and what they consider to be the most affordable choice, namely petrol and diesel cars,” said Ian Plummer, Auto Trader’s commercial director.

“Since cost is the primary consideration for most car buyers, the upfront retail price of EVs [electric vehicles] is somewhat off-putting.” 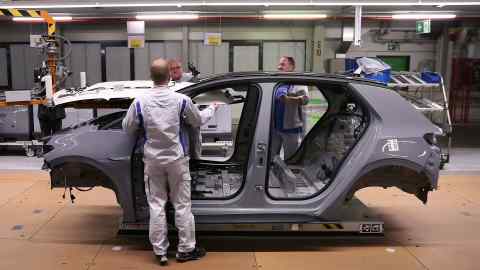 Government subsidies for electric cars were cut in March from £3,500 to £3,000, although the benefit does not apply for used vehicles. The industry has frequently called for long-term certainty over subsidy levels and other benefits, such as tax treatment, to encourage consumers to make the jump to battery cars.

Carmakers are trying to sell more electric cars this year to hit new CO2 rules across the EU that fine them if they fail to lower emissions across their fleet.

The UK government is also banking on a steep rise in electric vehicle buying as it considers banning sales of new petrol or diesel cars at some point after 2030. An original target of 2040 has been moved to 2035, with ministers considering a cut-off date of 2032 or even 2030.

Sales of new electric cars have risen steadily this year, according to official sales figures from the Society of Motor Manufacturers and Traders. Close to 40,000 new electric cars were sold in the UK between January and July, compared with 14,000 in the same period a year earlier.

Yet prices for used electric cars — a key indicator of underlying demand — have been falling during the year, suggesting that consumer appetite for electric cars has been softening while carmakers have continued to push new battery models to the UK.

Average selling prices for used electric cars fell 5.2 per cent during August compared with a year earlier, according to Auto Trader sales data.

While prices have been falling since the start of the year, and the decline has accelerated since lockdown began in March, last month’s drop is the largest single decline since November 2015.

“Over the past year, consumer demand has outweighed supply,” Mr Plummer said. “However, since the emergence of Covid-19, we have seen this trend reverse; whilst supply levels have remained relatively constant, consumer demand has eased, which has been a contributing factor to over six months of consecutive year-on-year price decline for hybrid and electric cars.”

Video: Why success in electric car making is no easy ride
Reuse this content (opens in new window) CommentsJump to comments section