How to make cities more liveable after Covid-19

For a second time this year, many of our big urban centres have fallen silent. With lockdowns imposed in much of Europe, and the US in the grip of a new Covid-19 wave worse than the first, the two regions’ most dynamic cities are again on their knees.

Visits to offices in the City of London, for example, are down to the depressed level recorded in the first lockdown in April, well below half the normal rate of activity. And public transport use has been falling again across Europe and North America, according to Google mobility data, a sign of a reversal of some of the recovery that followed the pandemic’s first wave.

The crisis has made some people ask whether it spells the end of such cities’ economic and social dominance.

Not according to Andrés Rodríguez-Pose, professor of economic geography at the London School of Economics and Political Science. In terms of the “macrogeography” — the difference between cities, towns and rural areas — “the general divide between dynamic cities and less dynamic smaller places is going to remain”, he says. Instead, “the biggest changes are going to be within cities, and between cities and their hinterland — the microgeography”.

A reduced need to commute given greater remote working, more online shopping, and less socialising “will reduce the demand for space in city centres, for office [use] and perhaps even housing, and increase it in the suburbs”, says the professor.

That means “a redefinition of city centres” he says. “Once you start vacating the city centre, it doesn’t stay empty, others start moving in.” The challenge is to “facilitate a redesign and redevelopment of city centres” with new functions including cultural activities, outdoor activities, and sports.

Another is to avoid the de facto segregation that occurred in the US from the 1960s to the 1980s with the “inner city less of a player and suburbs that are much more homogenous in terms of ethnicity and income”. Market mechanisms will drive the changes in how cities works, says Mr Rodríguez-Pose, “but city governments that jump on that [development] will have an advantage. You must make city centres liveable”.

It is a paradox that as sudden and unpredicted as this crisis is, it has not caught city leaders on the back foot. Instead, many city leaders find that the best response to the pandemic is to strengthen the strategies they were already putting in place.

Coronavirus is “accelerating trends that were there before”, says Francesca Bria, senior adviser on digital cities to the UN. There was already a “big trend of urban transformation away from the megalopolis and density of bodies in cities towards more distributed space”, she says.

An awareness that cities had to work towards cleaner air, less pollution, and a transition towards a carbon-neutral economy mean that many of the challenges from the pandemic were “things we had seen coming”, says Ms Bria. She points to the pursuit of “15-minute cities” and Barcelona’s “superblocks”, both urban planning concepts that aim to bring residents’ work, leisure and shopping needs within “self-sufficient neighbourhoods” that can be navigated quickly with minimal private car use.

One example of a local leader who has intensified previous plans for pushing this process along is Jon Burke, councillor in the London borough of Hackney with responsibility for energy, transport and “the public realm”. On Mr Burke’s watch, Hackney has accelerated the introduction of road closures for private cars and low-traffic neighbourhoods on an experimental basis.

The policy has not been without controversy. Mr Burke himself has suffered death threats from angry car users. More reasonably, some residents think it just makes traffic worse elsewhere, and some business owners complain about worsened access. 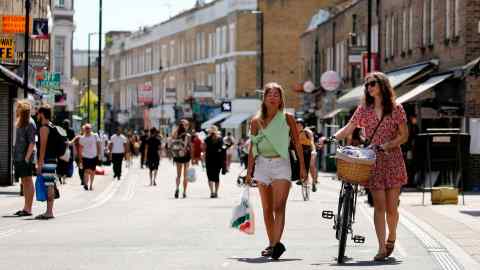 Reducing car use was already a stated ambition for Hackney council before Covid-19, according to Mr Burke, because of a rapid increase in car miles driven in London over the past decade. But the pandemic added urgency, he says.

“We are not using Covid as an excuse — we have been clear about the direction of travel. What coronavirus has done is accelerate the work we were undertaking.” As the lockdown was lifted in the spring and people began to return to work, they “were going to avoid public transport and get into their cars, [so] we had to take action fast and avoid a car-led recovery.” In some other boroughs that did not do this, he says, traffic levels were up 150 per cent year-on-year in September.

This illustrates a broader point: that cities are where the action is when it comes to structural economic change. Ms Bria argues “cities are the most advanced laboratories for experimentation” in a range of structural transformations, such as the green transition, digitisation and addressing inequality and social cohesion. 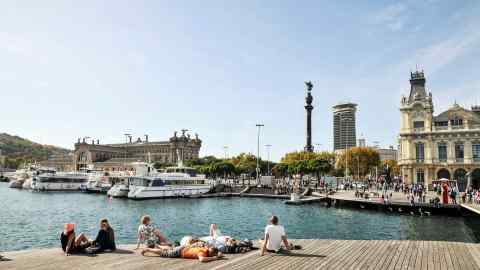 And it is not just about policy but also about politics — both in the short run to fight the pandemic and in the long-run management of change, she adds. “You can’t just have top-down [decisions] because you need a massive behavioural shift, so you have to work on the ground and have the financial resources on the ground.”

According to Mr Rodríguez-Pose, the question is who will have “the best and brightest ideas” for measures that will “harness decline in commercial activity on the high street and promote other activities likely to be drivers of the new city centres?”. Sceptics may ask if the redistribution of activity that such changes would entail do not threaten the very density that makes city centres so productive economically. In other words: is transformation affordable?

Some of the answers depends on how taxation and decision power is shared between different levels of government. “Tax revenues will change” if economic activity is distributed differently, depending on the “administrative division” of the territory, says Mr Rodríguez-Pose. “If you have a city that approximates the functional urban area, then it doesn’t matter that much. If you are [for example] Paris and your municipality is the city centre [only], then you need national . . . territorial policies that take into account who is losing out.”

In contrast, he says, “in most countries . . . planning [powers] are in the hands of local decision makers” which allows “policy experimentation” that will differ between cities. Some cities may not embrace transformation but rather try to “keep local shops and local traditional activities alive, [even] promoting the car”. In his view that “would be counterproductive in the long term”.

Mr Burke agrees. “Transport policy isn’t merely about transport — it’s about seeking to operate cities in ways that are more human [in] scale and are objectively proven to attract the kind of people who make those cities successful.” He adds that “it is very clear that independent businesses benefit from communities where people are encouraged to walk and cycle — and are more likely to shop locally.”

“Nobody now would advocate a six-lane motorway through Washington Square Park like Robert Moses did” in mid-20th century New York City. “When we close our eyes and think about what the good life in the city looks like, nobody thinks of miles and miles of polluting SUVs.”