Adrien Sauvage: ‘If men paid more attention to the details, they might have more party chat’

The LA-based menswear designer and photographer Adrien Sauvage is inspired by Roger Moore, the Mojave Desert and the louche look of a villain

My personal style signifier is a double-breasted, liberal-lapel ivory blazer – one of my own designs. I am very much about love, light and unity, and white feels cleansing to me, channelling the spirit of rebirth. When I moved from London to Los Angeles, I had to find a balance between form and the heat, and this piece is made from a Loro Piana cloth that’s very breathable. I also wear an ’80s Rolex, which was from my dad, and a bloodstone pinkie ring.

The last item of clothing I bought and loved was a tracksuit from Sergio Tacchini. It’s off-white and black with white stripes, and has a collar instead of a hood. The brand has always been pretty louche – and it has a very strong position with villains, which I like. £65, stuartslondon.com

My Buddhist father Victor said: ‘Your thoughts are not your mind.’ It was helpful in my younger days

Every man needs to invest in a made-to-measure suit – preferably midnight blue for their first. Style is about knowledge, wisdom even – knowing how to, say, drop a trouser on a boot. Every width of trouser determines what kind of shoe you should wear with it. If men paid a little more attention, they might have room for a bit more party chat.

The most underrated accessory is a good travel bag – mine is a weekend carrier by Tumi. Customised, of course; you’ve got to get your monogram in there. I like to keep it all in black – nice and ninja. £495

The thing that often surprises people about me is my laugh – I laugh a lot. And I love to dance. I am constantly on a vibe.

A recent find is a Malian Dogon statue of a seated couple from the late 1800s/early 1900s that I saw at Design Mix Gallery, an antique and objects dealer in Los Angeles. I love the composition, which is understated and elegant, and how it shows that men and women are reflections of one another. This gallery sells an eclectic range of one-of-a-kind statues, objects and curiosities, and if you’re looking for something unique, it’s a good trip. mixfurniture.com

The accessory I’d never part with is my bespoke glasses by Maison Bonnet, the brand that Yves Saint Laurent wore. I visited the London store just after it opened and commissioned a pair with really pronounced detailing on the arms. I’d be pretty blind without them.

The idea I wish I’d come up with myself is Elon Musk’s [satellite constellation] Starlink. As a child, I grew up watching Lost in Space and I’ve always been interested in extraterrestrial life.

When I need to feel inspired, I get a breath of fresh air and enrich myself by exploring different cultures. I used to do this by going to museums, but lately I’ve been spending time in the Mojave Desert, which is like my personal shrink at the moment.

An unforgettable place I’ve travelled to recently is Ghana, my motherland. A few years ago I got a letter inviting me to meet Prince Charles at Clarence House. We got on, so I designed a collection for his royal visit to Ghana. Having grown up in Britain, it was an honour to bring my tailoring back there, mixed with African textiles.

And the best souvenirs I’ve brought home are two leopard Benin bronzes from a dealer in my second motherland, Nigeria. To have them is very special as they remind me a lot of my ancestry.

The menswear moment that changed everything was Roger Moore in The Spy Who Loved Me, coming out of the sea in the Lotus Esprit, wearing a navy blazer, a striped shirt and a blue tie: immaculate. He’s my style icon; he exudes that vibe of 1+1=3. It’s the energy that carries over. In fact, the first suit I ever bought was a vintage Bogner all-in-one snowsuit in safari green. The owner Willy Bogner Jr worked as a cameraman for a few of the Jimmy Bond movies, which is why Moore was often wearing their sportswear.

The objects I would never part with are various works by the British artist Irvin Pascal. He commissioned some suits and made me some sculptures in exchange. I used to work with the de Botton family, who have two rooms at Tate Modern named after them, so art has always been something that’s very close to me.

The best book I’ve read in the past year is Joseph Campbell’s The Hero with a Thousand Faces. I find comparative mythology fascinating, as it helps to elucidate the notion that we all spring from a common ancestry.

In my fridge you’ll always find Ilford HP5 Plus black-and-white camera film, Fiji Water and some kind of Ghanaian or Nigerian food – usually jollof. It’s something that makes me feel at home, away from home.

My grooming expert is Johnnie Sapong, le coiffeur. He’s the number-one hair stylist – he has worked with everyone. He goes between London and Los Angeles. I couldn’t really trust anyone else.

The best advice I’ve ever been given is a phrase my father Victor, who was a Buddhist, said to me: “Your thoughts are not your mind.” It was really helpful in my younger days.

The best gift I’ve received recently is a book called African Ceremonies by Angela Fisher and Carol Beckwith. It’s a complete introduction to the vanishing rituals of Africa, and it took more than 10 years to create.

I have a collection of antique maps and super-rare books. The last one I purchased was an 1878 edition of Manners and Customs of the Ancient Egyptians by John Gardner Wilkinson, a pioneer of Egyptology.

My favourite room in my house is my little study. It’s where I just zone out and input stuff and see what comes up.

An indulgence I would never forgo is dark chocolate. Some of the best I’ve had is by Whittaker’s from New Zealand. whittakers.co.nz

The gadget I couldn’t do without is my Leica Monochrom, the camera that I shot some of my most iconic images with – the boxers, or the horses in Ghana. leica-camera.com

The design that intrigues me the most is imperial garments. I’m interested in the trims, the fabrications and why a lot of these outfits became uniforms. Pieces from the 19th century are the most interesting, so much so that I’ve recently acquired a new “thinking cap” – a British pith helmet and steel transport box.

The one artist whose work I would collect if I could is Barkley L Hendricks. There’s a book of his work called Birth of the Cool, and it’s mind-blowing – it exudes style in paint form. My favourite work is What’s Going On, from 1974 – it’s mainly black and white and has good energy.

If I had to limit my shopping to one neighbourhood in one city, I’d choose Paris, around the 1st arrondissement. There’s Charvet, where I go to pick up louche pyjamas, and L’Officine Universelle Buly, the next-level grooming accessories spot co-started by my friend Ramdane Touhami, which has soaps, monogrammed combs… even monogrammed lip balm. I also enjoy Galerie Chenel, which is run by these two young brothers, proposing objects of taste and quality. buly1803.com. charvet.com. galeriechenel.com

My favourite website is the Criterion Channel – it’s got a good selection of arthouse films and hidden titles that you might not have seen before, all beautifully curated.

Right now, I’m planning a TV show about the story of William Henry Savage, an ancestor of mine. He was the first black lawyer in the UK, and he became the King’s Advocate for Sierra Leone. He worked to liberate thousands of slaves and helped shape the future of west Africa. I’ll be doing the costumes, of course. 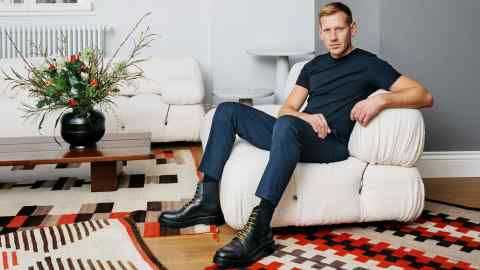