Fidelity International, LGIM, Schroders, DWS to work with clients to cut emissions by 2050

Thirty of the world’s biggest asset managers, which collectively oversee $9tn, have set a goal of achieving net zero carbon emissions across their investment portfolios by 2050 in a move expected to have huge ramifications for businesses globally.

The group, which includes Fidelity International, Legal & General Investment Management, Schroders, UBS Asset Management, M&G, Wellington Management and DWS, said they would work with their clients to cut emissions across their investments.

The decision means asset managers would be forced to shun companies that are ill prepared for a lower carbon economy if they are to meet their net zero targets.

“The transition to net zero will be the biggest transformation in economic history and we want to send a clear signal that there is simply no more time to waste,” said David Blood, who co-founded Generation Investment Management with former US vice-president Al Gore.

“The opportunities to allocate capital to this transition over the coming years cannot be underestimated. Without the asset management industry on board, the goals set out in the Paris Agreement will be difficult to meet.”

Asset managers have become increasingly concerned about the risks of climate change to financial returns. At the same time, the industry has been targeted by climate activists, who argue that investors have a vital role to play in tackling global warming, either through withdrawing investments from carbon-intensive industries or backing cleaner groups.

“Climate change poses one of, if not the most, significant risks to the long-term proﬁtability and sustainability of companies, including our own,” said Anne Richards, chief executive of Fidelity International.

The investors, which also include Japan’s Asset Management One and France’s Axa Investment Managers, formed the Net Zero Asset Managers initiative ahead of this weekend’s five-year anniversary of the Paris Agreement, where countries agreed to limit global temperature rises.

As part of the initiative, the investors pledged to set an interim target for the proportion of assets to be managed in line with achieving net zero emissions by 2050 or sooner and to review this at least every five years. The aim is to have all of their assets under management eventually included.

Stephanie Pfeifer, chief executive of the Institutional Investors Group on Climate Change and founding partner of the initiative, said the scale and significance of the asset managers joining the group was a “clear signal” that the “financial firepower” of institutional investors will be “committed to making real progress towards a net zero and resilient future”. 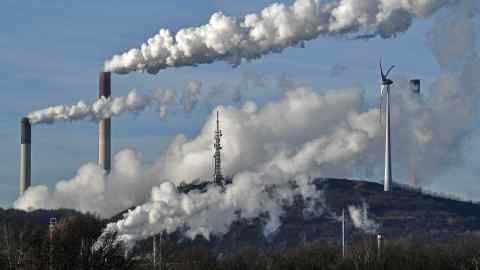 However, others gave the group a more cautious welcome.

Lucie Pinson, founder and director of Reclaim Finance, a non-profit organisation that has pressed financial groups over climate change, said many of the founding members of the new initiative had no or very weak policies on fossil fuels such as coal. “We remain sceptical,” she added.

But he warned that there needed to be concrete plans in order to avoid accusations of greenwashing.