Sign up to myFT Daily Digest to be the first to know about UK employment news.

Millions of British workers will be at risk of redundancy if the government withdraws its furlough scheme too early, business groups have warned Boris Johnson.

The “Job Retention Scheme” set up by Rishi Sunak is due to end in late June and the chancellor — who says he wants to avoid a “cliff edge” — is examining ways of extending it for some sectors while gradually cutting the level of support from its current 80 per cent of income up to a monthly cap of £2,500.

But business leaders have told the government that many of the 6m workers supported by the furlough scheme could find themselves unemployed if Mr Sunak cuts the support too quickly.

As many as 2m jobs would be at risk in the hospitality sector alone, according to industry chiefs who warn that many restaurants and bars will be able to reopen for months.

UKHospitality, which represents the industry, said more than four in five workers were on furlough — or about 2.5m — but most of these jobs would be threatened without government support.

Kate Nicholls, head of UK Hospitality, said there could not be an “overnight” end to the scheme. “The sector will need time to reopen gradually and some staff will need to be furloughed as businesses get back up to speed.”

About 900,000 workers across the retail sector are also on furlough. The British Retail Consortium has called for a tapering of support over a number of months to avoid the cliff edge in June.

Stephen Phipson, head of manufacturers group Make UK, said that an immediate end to the JRS for industry would have “devastating effects on employment levels” in factories — leading to potentially hundreds of thousands of redundancies.

Half of manufacturers do not expect trading conditions to return to normal before November, according to a survey by the group — including 17 per cent who believe it will take over a year to recover.

In a report published on Thursday, Make UK called on the government to adjust the furlough scheme so workers can return in a staggered way through a “more sophisticated, flexible and tapered approach” to funding.

Mr Johnson hopes to be able to set out on Sunday how businesses will start returning to work in the coming weeks, with state guidance on how to maintain social distancing among staff through measures such as staggered shifts, floor tape and avoiding face-to-face meetings.

Q&AWork & Careers
Live Q&A: Should I take a pay cut? 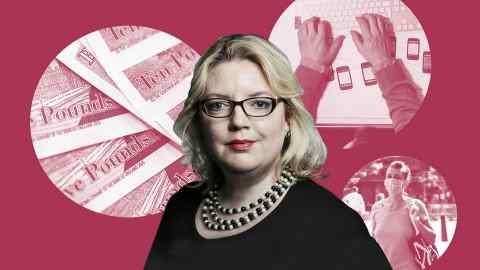 But barely half of businesses could operate at pre-crisis levels under social distancing rules, according to a survey of more than 800 members by the Institute of Directors — with more than one in five working at less than half capacity.

About half of directors had started drawing up plans for a relaxation of lockdown measures, but almost a third were waiting on government guidance, according to the survey.

Business groups and trade unions have complained that the draft guidance — reported by the FT on Sunday — did not contain any advice on the use of protective equipment (PPE).

Meanwhile, the TUC is putting pressure on the government to ensure that “Covid risk assessments” — which all companies will have to produce — should be made public, which business leaders are resisting.

Directors carry responsibility for health and safety at work, the Institute of Directors said, and “some may not want to open workplaces if they are not comfortable with the level of legal risks”.

Jonathan Geldart, director-general of the IoD, said: “Leaving lockdown, when it happens, won’t be plain sailing for business. Social distancing presents an unprecedented challenge for firms, and some may be simply unable to make it work.”