When Bahrain announced the discovery of an 80bn-barrel oilfield in the spring — its biggest find since the 1930s — it was greeted with only cautious optimism by industry analysts.

Bahrain’s current oil production of just 43,000 barrels a day has marked it out as a relative energy minnow among the crude-rich Gulf states, with consultancy Wood Mackenzie warning the new oilfield could prove “technically challenging and potentially high-cost to develop”.

But Bahrain’s oil minister, Sheikh Mohammed bin Khalifa al-Khalifa, is brighter about the prospects of the Khaleej Al Bahrain Basin, believing early signs point to a field with the potential to transform the state’s fortunes.

He is now on a push to attract international partners to help develop the resource, which has been described as a hybrid between a conventional field and the type of oil-holding tight shale rock that has elevated the US to an energy powerhouse.

“What we have is extremely encouraging,” the minister told the Financial Times. “We are working to prepare the right fiscal regime to attract companies to come and co-invest with us.”

The country is aiming to drill two to four wells to test the flow from the field, with the first results expected around the turn of the year.

Favourable investment terms were flagged at the time of the announcement as one of the key criteria needed to make the development a success. Bahrain has been seen as offering tough terms by international standards on previous developments. “Ultimately we have to make this attractive,” Sheikh Mohammed says. “It should give investors the returns they require while still being fair to the government here.”

Crucially, the kingdom is planning to offer concessions that will allow any major international oil companies joining the development to book reserves from the field on their balance sheet. Additionally, the minister says the country will most likely pursue so-called production-sharing agreements, where revenues are divided in a percentage split with partners.

International oil companies generally prefer these to service contracts — such as those offered by the federal government of Iraq when it was opening up its oil sector — where companies are simply paid a set fee. “Where we end up exactly remains to be seen,” Sheikh Mohammed says. “But we are confident the terms will be attractive, especially to early investors. It will be a win-win.”

The minister says the state is particularly keen to work with companies with experience in the US shale sector if the field does turn out to flow more like shale rock than a conventional basin.

Meanwhile, Italy’s ENI, which has made some of the biggest oil and gas discoveries of recent decades, is working on further exploration in the country’s territory. Chinese companies have also expressed an interest, the minister says.

Situated in shallow water just off the coast of Bahrain, the field should not present significant development challenges to experienced producers, Sheikh Mohammed says. “The good news is it is very shallow offshore. It’s a bathtub area. So we are looking at ways to optimise costs of development.”

The field’s discovery came as Bahrain was already overhauling its energy system, which has suffered from output declines and the sharp drop in oil prices since 2014. The state is working towards lifting production from its existing field back towards 100,000b/d by the end of this decade.

Under a 1958 political agreement, the state also shares revenues with neighbouring Saudi Arabia, the world’s largest oil exporter, from the Abu Safah field that produces about 300,000b/d, according to the US Energy Information Administration.

Its co-operation with Saudi Arabia extends to its refining system. The Sitra refinery is just south of the capital Manama, which is undergoing an expansion from 267,000b/d to 360,000b/d by 2020, and receives Saudi crude oil via pipeline. This has recently been expanded to between 350,000 and 400,000b/d of capacity.

By the end of the year Bahrain will also have a specially built liquefied natural gas ship in place, which will serve as a floating import and regasification terminal for the super-cooled fuel. That will give it greater flexibility on gas imports by allowing it to tap into growing supplies of LNG from as far afield as the US or Australia.

The terminal may end up acting as a bridging measure if it can develop a deep gasfield, the discovery of which was announced along with the oil find in the spring, potentially making it a major gas supplier in the future.

The kingdom is discussing long-term plans with other members of the Gulf Cooperation Council, principally Kuwait and Saudi Arabia, about the development of an interconnected shared gas grid. “It is ultimately about security of supply,” Sheikh Mohammed says.

Asked whether there are fears the oil discovery has come at a time when the world is preparing to transition away from crude and other carbon-based fuels, he says there is little concern in the region — yet — about so-called peak demand being imminent.

The recent recovery in oil prices to about $80 a barrel from below $30 in early 2016 is evidence that demand is still growing strongly, he says, with supplies struggling to keep up.

“There is no real evidence of peak demand being achievable in the next few decades,” the minister insists. “Even if electric vehicles and renewable energy take off, we still see hydrocarbons remaining the dominant part of the fuel mix. Supply risks far outweigh demand destruction.”

Ultimately, Bahrain is banking on the development of its new oil reserves to support the entire country, with energy sales accounting for the vast majority of government income. “It’s difficult to see it not having an impact, given the size of the resource,” Sheikh Mohammed says. 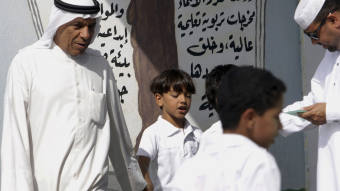