Men’s style for the climate of wealth

What will the air-conditioned elite be wearing next summer? Black leather, plastic and pac-a-macs if the catwalk is your guide

Ending a three-week stretch, the Spring/Summer 2020 menswear collections draw to a close this Sunday in Paris. But bar the blue skies, sun-dappled courtyards and Elysian rolling fields backdropping the half-a-dozen or so fashion shows staged outside, there hasn’t been anything especially summery about them.

In Milan, scant were the scanty briefs which once made up the bulk (perhaps the wrong word) of the men’s showings. Tick off a few of the emergent aesthetic themes — black leather; shiny more-than-single-use plasticky coatings; free-flowing, robe-like coats; and the odd fashion resurrection of the trainspotter’s favourite, the pac-a-mac — there’s nothing that spells summer.

There are two ways to interpret that. One is it is indicative of an ivory tower syndrome often ascribed to fashion; designers decide on a whim that the season is all about PVC or Harris tweed, and care not for the wishes (and sweat patches) of mere mortals. That’s possible — the general viability of leather Bermuda shorts is questionable at best.

But the other explanation is more interesting, more canny, more likely: that fashion is breaking free from a homogenised view of seasonality, based around northern hemisphere, western climates — what the political scientist Samuel Phillips Huntington dubbed “the West versus the rest” in wider cultural discussion — instead transitioning into something truly global, with the potential to make far more money.

That fashion brands now have a global outlook is nothing new; what is new, and different, is seeing that have a direct impact on the clothes themselves. “Today, you wouldn’t have a business if you didn’t understand what the market wants,” said Donatella Versace, in advance of her SS20 Versace show that was heavy on leather, with no male flesh exposed below the clavicle. What market was she considering? Not the Italian one, presumably, where the temperature was balmy, around 30 degrees, and the gloss of calfskin was matched by perspiration on the models’ brows in the garden of Versace’s palazzo.

In fact, those markets are more likely to be in the Middle East and Asia. Deloitte has stated that the combined luxury purchasing power of Asia, Latin America and the Middle East now exceeds that of the traditional axis of Europe and North America. The former are the regions where brands continue to post booming growth, especially Asia. India is predicted to grow 8 per cent a year between 2018 and 2022, according to McKinsey’s State of Fashion report for 2019, with a luxury-purchasing middle class expanding by 19.4 per cent annually over the same period. Its apparel market is estimated to reach $59.3bn in the next three years.

There’s a separate climate in this world — the climate of wealth — that allows for dressing in chiffon in sub-zero temperatures and sporting fur coats in Los Angeles and the Middle East (men’s designer Astrid Andersen, based between London and Copenhagen, creates elaborate fur pieces that retail best in those locales). Karl Lagerfeld used to describe the feather-light furs he made for Fendi as being “air-condition furs”, luxurious enough to confer status, but light enough to wear in Shanghai on a warm spring day. Buyers want fabrics to be lighter, which are more conducive to travel and to the heated, thermostatically controlled lives many lead.

“There is no reason to follow the seasons anymore. All that is very old,” said Anthony Vaccarello, the creative director of Saint Laurent, ahead of his show in Los Angeles. “I don’t think seasonally. Of course, those shows are called ‘spring/summer’ but [the goods] will be delivered in October so . . . who cares?”

Indeed. The biannual structure of spring/summer and autumn/winter, which has determined fashion for a century, has to a degree collapsed, undermined by ever-increasing importance of pre-collections — interim ranges with international shows — which now account for the bulk of a brand’s sales. Usual quotes hover at 70-80 per cent — that includes menswear, where the pre-collection is becoming more prominent (Bottega Veneta showed their men’s pre-spring collection in Milan this week). Those collections are successful because they are rinsed of seasonal indicators. They’re trying to please all of the people, all of the time, in all places. And they’re doing a good job of it.

So perhaps that’s the overriding message of the SS20 men’s season: that it’s the end of the season. At least the end of the season as fashion knows it, denoting clothes designed especially for climatic shifts, suits suited for sun, or snow. Indeed, it’s possibly the end of the season in terms of it noting anything other than a convenient time-stamp to necessitate designers generating new ideas, to try to seduce us into buying things like organza shorts for “winter” (or summer), and pac-a-macs for “spring”. 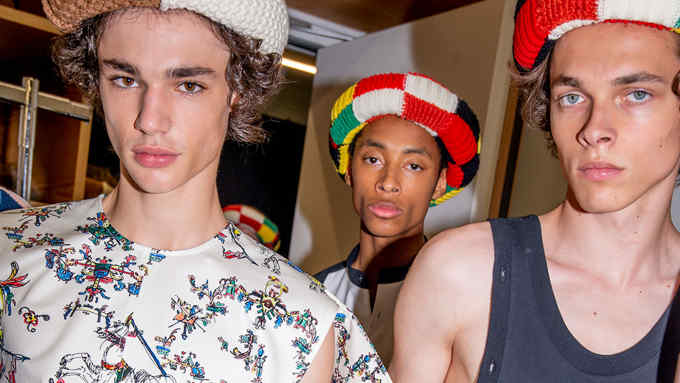