Without Karl, can Chanel find its voice?

Once the talk of Paris Fashion Week, Chanel now speaks only in whispers

It was just one year ago that Karl Lagerfeld’s final collection for Chanel was shown at the Grand Palais, 14 days after his passing. The air was thick, then, with the sense of the historical moment — Lagerfeld had been Chanel’s creative tour de force for 36 years — and models and clients marvelled or wept as they wandered through the snowy alpine village he had dreamt up for his last bow.

A year later, much at Chanel remains the same, though it speaks more quietly than it used to. Instead of bringing in a well-known outsider, Chanel promoted his longtime right-hand, Virginie Viard, who has given few interviews. Those she has given have been devoid of the spark and controversy that would keep Lagerfeld’s name in the headlines for weeks. The show sets are also simpler, less costly, absent of the rockets or life-sized supermarchés of the Lagerfeld years.

Instead, Tuesday’s show featured a plain mirrored catwalk, lightly misted, which wound between white-and-black risers stacked like Chanel hat boxes. Models stepped out, sometimes in twos or threes, outfitted in slim A-line tweed coats, boxy wool jackets with scalloped edges, and roomy jodhpurs left unbuttoned over, or tucked into, swashbuckling boots. They, and the waistless black velvet dresses, looked comfortable and easy after a week of sharp waists and skin-tight latex — an effect mired by the cheap-looking medallion necklaces, heavy cross brooches and chain belts piled on top.

Missing was a theme, a narrative, a crackle of excitement. Chanel’s shows are often the most talked-about of fashion week, fetching front-page headlines and generating hundreds of millions of page views for online publishers.

Chanel is the world’s second-largest luxury brand behind Louis Vuitton, with 2018 revenues of $11.1bn, an increase of 10.5 per cent compared to the previous year. Such growth will be difficult to sustain if Viard doesn’t learn to speak up. 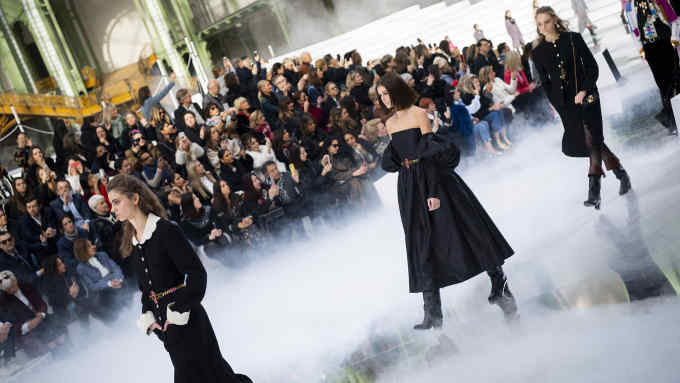