Is Hanwoo the next Wagyu steak?

In Seoul the ‘future’ of beef is setting griddles alight

Beef is a serious business in South Korea: local butchers typically identify 120 different cuts (as opposed to the western 20 or 30) that run from the tenderloin to obscure parts of the tail. Hanwoo beef is considered the most luxurious of its offerings, but although renowned in South Korea it is less known outside the country as so little of it is sold abroad. Following an outbreak of foot and mouth a decade ago, it has been forbidden to export meat from South Korea except to Hong Kong. In the interim, the meat has taken a backseat to its rival Kobe, the most acclaimed of all Wagyu in Japan.

Hanwoo cows are relatively small creatures and have inhabited Korea for several thousand years. They were originally used as draught animals and have only been considered a delicacy since the 1960s, which coincided with the growing affluence of South Korea. Like Wagyu, the secret to the flavour of Hanwoo is the extent of the marbling or strands of fat that criss-cross the meat. This is achieved by a diet high in various grains and corn rather than grass, with added ingredients such as beer and, in some cases, fermented pine needles.

Much Hanwoo is sold in Seoul’s sprawling Majang Market, which consists of 3,000 shops and stalls and is one of the largest meat markets in Asia. Here, alongside the scores of simple restaurants and stalls on each avenue and alley, there are also provisions for purchasing fresh beef and then paying a small fee to rent barbecue space to cook it to your own requirements. Or you can head to Born & Bred, owned by second-generation butcher Jung Sang-won, which offers a multi-course immersion showcasing the different cuts of Hanwoo.

With its black exterior and copper trimmings, Born & Bred looks more like a luxury goods outlet than a restaurant. Meats are displayed on the ground floor, while the upper floors present the more modest meals. The main event takes place downstairs in the basement speakeasy, which is where the menu and the atmosphere gets more intense. Here the room is split into two semi-circular counters for ten customers, separated with a partition so that each party can enjoy their privacy. Jung Sang-won perches on a platform in the centre before three pits of glowing charcoal made from oak trees found in the interior of South Korea.

What follows is a 14-course excursion into the differing styles and qualities of Hanwoo, with morsels of raw blade meat the colour of red peppers on a potato pancake with caviar. There are also three thick triangles of Chateaubriand with raw slices of Songyi mushroom, the local version of cep (boletus edulis). Deftly shaped into 10 rectangles, they are applied to the grill above the charcoal for tens of seconds, lending the meat a delicious smokiness with a lingering sweetness that comes from the tributaries of fat.

In another more spectacular piece of theatre, a nearby curtain is pulled aside and an entire side of Hanwoo is trundled through the dining area to centre stage. Some knife work removes the fourth and fifth ribs – “These are the prime ones,” says Jung Sang-won – before the different cuts emerge to be eaten, some raw and others cooked, with slices of black truffle or occasional marinades.

Overall, the texture and density of the various cuts of beef are more robust and intense than Wagyu, but they are none the worse for it. It doesn’t have the creamy foie gras texture of Wagyu – some cuts taste like an intensely flavoured sponge. Perhaps it is like trying to compare the very best English sparkling wine with Grand Cru champagne – they are both superb examples of the terroir and grape varieties, with near identical components, but discernibly different.

As a decision awaits new export rulings, due to be resolved next May, interest is slowly building for Hanwoo. Last Summer, Dario Cecchini, the Tuscan butcher renowned for his Bistecca alla Fiorentina, gave several dinners at Born & Bred and is sending one of his butchers to the restaurant to learn more about the meat. David Beckham has visited the restaurant and buzz is mounting for this new “take” on beef. Meanwhile, Jung Sang-won dreams of opening the first Hanwoo restaurant in Europe as word is growing about its special qualities and attributes. 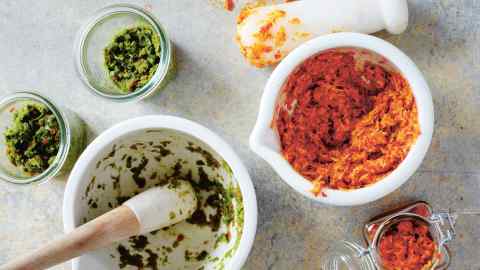