How textiles tell a story of empire and globalisation

Fabric work is enjoying a revival, as artists use it to explore imperial histories, feminist politics and queer aesthetics

The art world is in the midst of a feverish correction of the canon — to include more women, artists of colour and media relegated to the lesser category of “craft”. Now, textile and fibre-based art, long marginalised thanks to its association with women’s work and non-western cultures, is in the spotlight.

At this year’s Frieze London fair, Cosmin Costinas, director of the Hong Kong non-profit ParaSite, curates a section called Woven that brings together the work of several generations of artists who, in one way or another, engage in the rich lineage of textiles, weaving, tapestries and embroidery.

The showcase is intended more as a mirror for our times than a market driver, Costinas says. “We wanted to reflect on the very particular moment that the UK is going through and its fraught connection to the world, its imperial history,” he said.

As the country grapples with its place in global geopolitics and the ghosts of its colonial past, Costinas sees an opportunity to connect Brexit angst to what’s happening around the art world, “in terms of decolonising our aesthetics, our visual languages and institutional infrastructure”. Textiles were once central to Britain’s relationship with its colonies, particularly the Indian subcontinent. Britain’s intervention into the Indian textile industry ultimately caused its collapse.

A number of the artists featured in Woven use fibre-based works to address colonial or postcolonial narratives, most obviously the Filipino multimedia artist Cian Dayrit, who makes tapestries that meditate on map-making and power — the violence latent in the cartographer’s carving up of the world. His work will be on view in the booth of Manila-based gallery 1335 Mabini.

Another Philippine gallery, Silverlens, is bringing to Frieze London works by the late artist Pacita Abad, whose “Immigrant Experience” series tracks her travels in the US and throughout the developing world with her husband, who was a developmental economist.

Following a 2018 retrospective at the Museum of Contemporary Art and Design in Manila, work by Abad “that had been in hiding for 20 or 30 years has finally come out”, says Isa Lorenzo of Silverlens. Abad erected a mobile studio wherever she went, learning from local makers and weavers.

It’s almost like textile-making fell out of fashion, and it’s coming back but in a different, more conceptual direction

She incorporated traditional practices into her work — tie-dye in Africa, macramé in Papua New Guinea, silk painting in the Dominican Republic — and invited local members of the community to create her compositions, which typically include painting with quilting, sequins and other textured materials stitched into their surfaces.

Wendi Norris, a US dealer based in the Bay Area, will show work by the Indian-American artist Chitra Ganesh, who creates multimedia compositions, murals and animations that riff on Indian folklore, female stories of empowerment and the visual cultures of Buddhism and Hinduism — and incorporate vernacular and found materials, including Banjara-style fabrics. “Her materials serve a lot of interesting purposes beyond just what you might think of as a reinterpretation of colonialism,” says Norris. “She is building talismans within these figures.”

Institutions around the world are driving some of this recent interest in textiles. Norris has sold Ganesh’s work to three US museums this year alone — the San Jose Museum of Art, the Davis Museum at Wellesley College and the Fine Arts Museum of San Francisco — and is in discussions with two more. Lorenzo has seen an increase of interest in Abad’s work from institutions in Asia and Europe, where her work recently entered the collections of the M+ museum in Hong Kong and London’s Tate Modern.

The Woven section at Frieze also comes on the heels of several landmark exhibitions that have brought greater legitimacy and recognition to fabric-based media, including a Tate Modern retrospective dedicated to the modernist textiles and compositions of German Bauhaus artist Anni Albers, and the Met Breuer’s showcase of late Indian artist Mrinalini Mukherjee’s fabulously inventive fibre deities and icons, as well as her bronze and ceramic sculptures. (Mukherjee will also receive a solo booth in the Woven section, organised by Delhi-based gallery Nature Morte.)

In October, MOCA LA will revisit the history of the American Pattern & Decoration movement, which in the late 1970s turned an eye to eastern traditions and sought to overturn the eurocentricity, masculinity and cultural suprematism of western modernism through its celebration of surface patterns and decorative motifs.

The Whitney Museum will also open a craft-centred exhibition this autumn, Making Knowing: Craft in Art, 1950-2019, which features several of the museum’s new acquisitions, including a threaded cotton composition by Jordan Nassar, whose work is based in part on Palestinian embroidery traditions.

The commercial market has shown signs of a greater appetite for textile-based work, too, as indicated perhaps by the rapid rise of American artist Tschabalala Self, whose oil and fabric collage “Out of Body” (2015) went for five times its estimate at Christie’s in June. (Another of Self’s fabric and paint works, “Cross”, will go under the hammer at Sotheby’s Contemporary Art Day Sale in London on October 4, with an estimate of £50,000-£70,000.)

But gallerists and specialists caution against seeing the medium as its own market. There are manifold factors at play in the greater embrace of fabric art, including the current resonance of feminist artists who have used craft objects to turn stereotypical forms of femininity on their head, like Tracey Emin and Rosemarie Trockel, says Sotheby’s specialist Emma Baker. She also cautions against thinking of textiles as rooted exclusively in non-western traditions.

In the European Renaissance, for instance, tapestries were celebrated as fine art. Raphael was a prolific designer of tapestries, which were “a way of decorating people’s homes and castles,” Baker says. “So it’s almost like that fell out of fashion, in a way, and it’s coming back but in a different, more conceptual direction — to challenge stereotypes and take on more diverse influences.”

Fibre-based works also have a particular history with regard to queer aesthetics, as in the case of Jose Leonilson, the late Brazilian artist whose delicate embroideries formed an intimate diary of his battle with Aids — and whose work will be on view in Frieze’s Woven section with the São Paulo-based Galeria Marilia Razuk.

Costinas is also keen to emphasise how broad and porous the field of textiles and fibre-based art is. “We are certainly not interested in creating another ghetto around this category,” he says. “That was very important as well — to show that this is a much, much more complex conversation.” 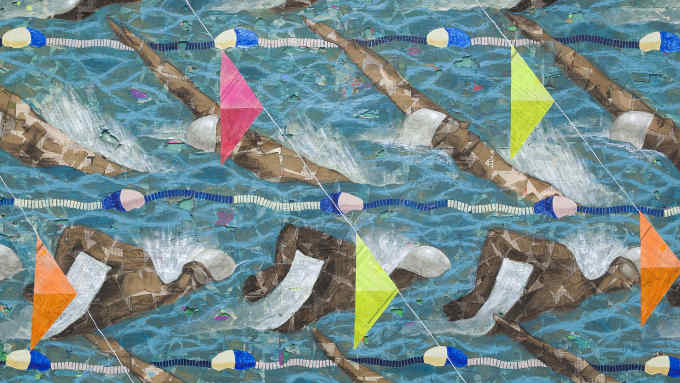