Oil prices have fallen to their lowest level in 17 years, dropping below $25 a barrel, as demand for fuel has been hit by work and travel lockdowns introduced in some of the world’s biggest economies as part of efforts to contain the spread of coronavirus.

Crude has now collapsed by more than half in a little over two weeks, with weak demand exacerbated by a price war between Saudi Arabia and Russia, which are raising supplies just as consumption falls dramatically. The two had previously co-operated on crude output but fell out over Riyadh’s calls for greater production cuts to boost the price.

Russia admitted on Wednesday it would like higher oil prices as it revealed that the recent crash meant it would run a budget deficit this year, but gave little indication it plans to pull back from its confrontation with Saudi Arabia in the oil market.

The kingdom reiterated that it would continue to increase supplies in the coming months, maintaining its commitment to increase them by roughly a quarter to 12.3m barrels a day — even as demand falls in the face of the coronavirus pandemic.

“The degree of demand destruction has shocked producers and means they are behind the curve,” said Rachel Ziemba at the Center for a New American Security, a think-tank in Washington.

“Despite the pain of plunging oil prices, neither Russia nor Saudi Arabia seem ready to back down on their plan to boost production and flood the market.”

Energy Aspects, a consultancy, warned on Wednesday that Brent prices could drop as low as $10 barrel.

The extent of the crash may yet prompt calls from other countries for Saudi Arabia and Russia to pull back from the brink, as their action risks further destabilising financial markets and imperils the ability of poorer oil producing countries to respond effectively to the Covid-19 crisis.

The International Energy Agency has already warned of the economic hit to poorer producers such as Iraq and Ecuador, saying that their revenues from oil and gas sales could fall as much as 85 per cent this year.

For countries dependent on energy sales to fund government budgets, a collapse in revenue could undermine health systems set to be tested by the coronavirus’s spread, the IEA has said. Financial markets have also been rattled by oil’s slump.

Jason Bordoff, a former energy adviser to the Obama administration, said Saudi Arabia’s decision to increase supplies at this time “will have long-term repercussions for perceptions of the kingdom’s role as a responsible oil market manager”.

“Having pushed back for years against attacks on Opec by explaining it is a force for market stability, the kingdom seems to have given up trying,” Mr Bordoff added.

Russia, whose target is in part the growing but indebted US shale oil industry, said it would be forced to tap its national wealth fund this year as falling oil prices pushed its own budget into a deficit. It had previously forecast a Rbs930bn ($11.4bn) surplus.

The Russian rouble sank 7.5 per cent on Wednesday, taking its fall so far this year beyond 30 per cent. The currency broke past 80 to the dollar, a fresh four-year low and close to its lowest ever level. 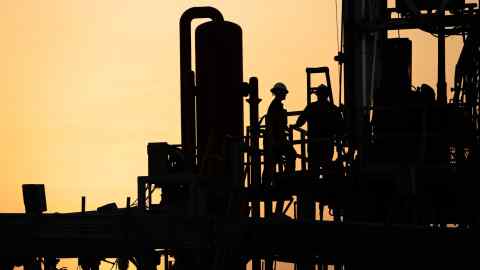 Kremlin spokesman Dmitry Peskov conceded to reporters: “Of course this is a low price, I would like it to be higher.” But, when asked about the potential of Russia re-engaging with Saudi Arabia and the wider Opec cartel, he went no further than saying the country was monitoring the market.

Many oil analysts believe Saudi Arabia is trying to push Russia back to the negotiating table. But the extent of the collapse in oil demand now forecast — with entire European countries locking down and major US cities imposing restrictions — may make it difficult for the two energy giants to formulate an effective response, even if they were on better terms.

Eurasia Group, a consultancy, has warned that global oil demand could fall by as much as a quarter this spring, with international air travel effectively shut down and millions of employees no longer commuting to work.

US president Donald Trump last week praised lower oil prices as good for motorists, but faces pressure as the economic and social impact of the coronavirus pandemic intensifies. Republican senators this week asked Saudi Arabia to review its policy of raising supplies, which threatens to squeeze the US shale industry and harm big energy-producing states such as Texas and North Dakota.