Prada AW19 report: every rose has its thorn

Miuccia Prada’s AW19 collection for Prada was mostly black, staged on a jagged, spiked, sponge floor, sparsely lit, and rather angry. The models wore dark wool separates, tweeds, flak jackets, sparkly shoes and lace. Dresses with the classic Prada sweetheart neckline were fashioned in a raw grey tweed. A rose print motif was encircled by thorns. The models had Wednesday Addams hairstyles (the Addams family have been a regular feature at recent Prada collections) but they just as easily recalled Greta Thunberg, the Swedish 16-year-old climate change activist, who also has waist-length braids.

Prada said her collection was about fear, and the threat of war “in general”. And romance. If she was feeling a little adversarial, perhaps she has good cause.

The Italian designer has always taken pride in her abstruse, stubborn, sometimes alternative point of view. She deliberately goes against the consensus. As she said this week, in an interview for the Business of Fashion: “I’m deeply against cliché or the usual or what everybody else does.”

Nevertheless, her desire to be contrary has been curtailed of late. The recent fall out over the sale of a racially inflammatory Prada keychain, that looked like a monkey, has found the designer, along with Gucci’s Alessandro Michele, embroiled in a broader debate about cultural sensitivity. Her new initiative, a diversity council, whose members include her friends the artist Theaster Gates and filmmaker Ava DuVernay, has been established to elevate voices of colour within the company, and in the industry at large. She expects the council to educate — and to be educated in return.

It’s been a salutary lesson. Prada is only just creeping out of a long period of profit decline. The early signs are that its long overhaul is beginning to bear fruit. Last year, the Prada co-chief executive and owner Patrizio Bertelli declared that “a new phase of progress has begun”. A public relations disaster is not what they need.

This collection seemed less vulnerable to nuance and misrepresentation. It’s messaging simple — it was a show of extremes. It was dark and light, rebellious and romantic. It featured stompy, heavy boots and a goth-metal soundtrack (spliced with campy horror themes such as The X Files) mixed with flashes of deep femininity — lace veils, crystal embellishments and rose adornments (some, stuck on outfits in wilting silk bouquets). It’s dark energy was exciting — the clothes were better still. It showed women, as Prada collections are wont to do, as having different sides. This woman looked emphatically feminine — and royally pissed off.

“It’s a problem for my whole career,” said Prada of her own struggle to reconcile a passion for more political matters with her work in fashion, a job she summarised backstage as “making clothes for rich people” and a diversion for most people “designed for lighter times”. Although she makes broad statements with her collections — about women, fear, angst, empowerment — she finds it “difficult to sound intelligent when talking about politics in fashion because the themes can seem very superficial”.

That she has created a new forum for a more constructive discussion is a good thing. In the current climate of recrimination, where social media has become a tinder box for outrage, we need more arenas for sensible debate. Perhaps more importantly, we need more arenas in which to listen. 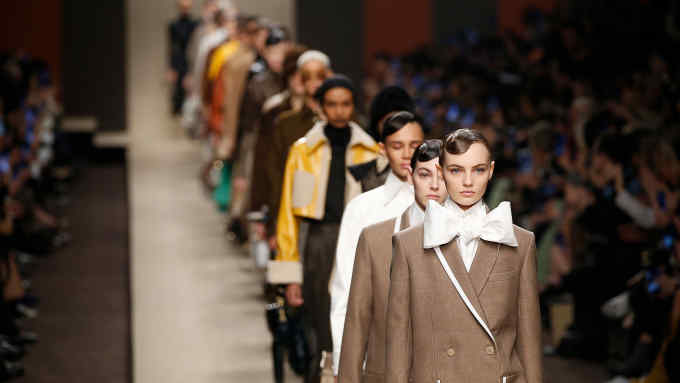