France unveils €15bn aid package to ‘save’ its aerospace industry

France has unveiled a €15bn support plan for the aerospace industry, warning that 100,000 jobs in the sector are on the line after the Covid-19 pandemic led to worldwide border closures and travel curbs.

The plan, which includes support already announced by the state, “is commensurate with the violence represented by the crisis at the start of the year and its lasting impact on air traffic”, Bruno Le Maire, French finance minister, told a press conference on Tuesday.

“If the state doesn’t intervene straight away then one-third of the jobs in the sector could disappear,” he added.

Aerospace employs 300,000 people in France either directly or indirectly and brings in €58bn in revenues every year. Mr Le Maire warned that without support “100,000 jobs would be threatened within six months”.

The French economy has been hit hard by the pandemic, and the French government has already launched two other sector specific plans, with €8bn in support for the auto industry and €18bn for tourism.

Bruegel, the think-tank, has put the immediate fiscal support provided by the French state to the economy at around €88bn, compared with an estimated €456.5bn in Germany.

Even adding the new money in the aerospace plan, the differential — alongside the more intense lockdown in France and its reliance on a few large companies in hard-hit sectors in contrast to Germany’s more diverse industrial base — has led economists to predict Germany will bounce back more quickly from the impact of the virus.

On Tuesday, France’s central bank predicted that the country’s economy would contract by more than 10 per cent this year despite starting to recover in the second half. Unemployment was expected to rise from 8.4 per cent last year to a four-year high of 10.1 per cent this year and to hit 11.7 per cent next year, it said.

By contrast the German economy is expected to shrink by about 6 per cent, according to Bundesbank forecasts.

Companies across the aerospace sector and its supply chain are struggling as orders have been cancelled and cash flow has dried up.

Airbus, which is based in Toulouse in the south of France, has slashed production by a third and industry leaders are warning that low demand could last for years.

Airbus chief executive Guillaume Faury welcomed the government's aid package in the midst of what he described as an "unprecedented crisis".

France’s support plan includes a €7bn loan package already announced for airline Air France-KLM, €300m to modernise the supply chain and an investment fund starting at €500m, which aims to climb to €1bn, designed to help small and medium-sized industries, including with potential consolidations. 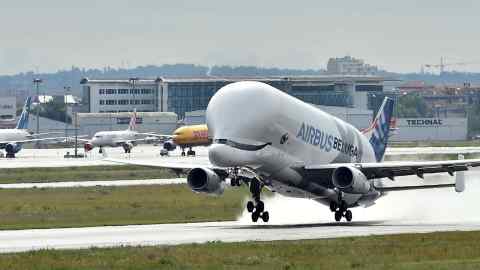 As with the auto sector plan, the government is pushing for more investment in clean energy, putting €1.5bn on the table over three years for research into greener aircraft.

It is also strengthening existing schemes for the sector, such as unemployment support and export credit guarantees, and accelerating planned military orders that were scheduled for the coming years.

According to the French government, since March some 651 aerospace sector industrial sites have made use of the state’s partial unemployment scheme to support a total of 110,000 workers.

Unveiling the plan flanked by the ministers of environment, defence and labour, Mr Le Maire said France “must save our aeronautical industry and avoid any loss of position relative to the US’s Boeing and China’s Comac”.

The €7bn loan package for Air France-KLM, the Franco-Dutch airline, is made up of a €3bn direct loan from the state and €4bn provided by commercial banks but guaranteed by the government.

Get alerts on French economy when a new story is published