Brazilians in search of security look to Jair Bolsonaro

A mural at the headquarters of Rio de Janeiro’s elite urban combat police, Bope, depicts piles of skeletons in the “Valley of Dry Bones” — a biblical scene from the Old Testament prophet Ezekiel.

But instead of forming into the ancient nation of Israel, as Ezekiel originally intended, the bones in the painting join up to become black-clad Bope agents, weapons trained, eager to impose order on the chaos of 21st century Rio.

“Behold, I will open your graves . . . And ye shall know that I am the Lord,” it says ominously.

As Brazil heads into the first round of its 2018 presidential vote on Sunday, units such as Bope are at the sharp end of a key theme in the election — law and order.

Former army captain Jair Bolsonaro is leading polls in the two-round election, which has become polarised between the left and the far-right. His message is Old Testament — violent retribution against crime to save pessoas de bem, “good people”, from drowning in a sea of banditry.

The former lawmaker also stands for a return to “traditional” family values — an appeal to Brazil’s religiously conservative masses, and for a more authoritarian presidency to govern a corrupt congress decimated by sweeping graft investigations. 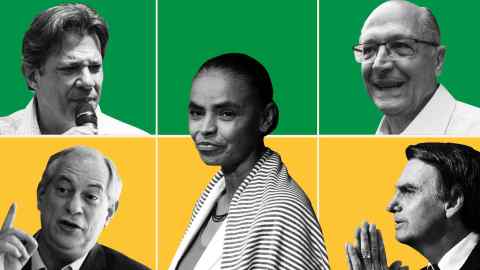 The message, a mixture of those delivered by US President Donald Trump and Philippine strongman Rodrigo Duterte, has won over many ordinary Brazilians desperate for change. At stake is the future of Latin America’s largest economy, which is struggling out of its worst recession in history.

“What is affecting the population these days is fear and this fear has a base in reality, principally in the level of insecurity and violence,” said Renato Sérgio de Lima, director of the Brazilian Forum on Public Security, a non-profit group that facilitates debate on public security matters.

Mr Bolsonaro, who is leading with 35 per cent in the latest survey by pollster Datafolha, is the first far rightwing politician with a real chance of leading Brazil since its military dictatorship ended in the mid-1980s.

His main rival is Fernando Haddad from the leftist Workers’ party, or PT, with 22 per cent. While Mr Haddad is seen as a moderate, the PT is unrepentant about its economic mismanagement during its 13 years in power that ended in 2016 and its involvement in corruption. Investors dislike its plans to return to its big-spending ways, analysts say.

Markets have risen recently on optimism that Mr Bolsonaro, whose economic adviser is a University of Chicago-trained financier, Paulo Guedes, will win. But some analysts are sceptical.

“The presidential race is on a knife edge. And even if Mr Bolsonaro wins, there are big question marks about whether he would be willing or able to push through market-friendly reforms,” said Capital Economics.

Others believed the election could still surprise. Mr Bolsonaro could win in the first round by garnering more than 50 per cent of the valid votes or more than the other candidates put together. But his high rejection rates — those who would never vote for him — makes this unlikely.

Another possible surprise could be a last-minute surge by Ciro Gomes, the third-placed candidate, who is a centre-left politician.

“There is a strong movement in favour of Ciro,” said Sérgio Praça of FGV-RJ, an academic institution. But he added with Mr Gomes polling at only 12 per cent, his chances were slim.

Ultimately, Mr Bolsonaro’s security pitch is expected to win him the first round, analysts say. The number of Brazilians murdered in the decade to 2016 is higher than the number of deaths in Syria’s civil war. Mr Bolsonaro’s Rio constituency is the epicentre of this crisis, with gunfights worsening in the city’s slums, or favelas.

The problem is exemplified by the Santa Marta favela, the first Rio slum to be “pacified” 10 years ago under a lauded community policing programme to kick armed traffickers out of the city’s shantytowns.

Today the entrance to Santa Marta, famous among tourists for its visits from Michael Jackson and Madonna. is guarded by a young bare-chested drug trafficker in board shorts and flip flops with an AK-47. The hubbub of upper middle-class Botafogo is only a block away.

“We need to lower the minimum age of criminal responsibility,” said a police officer overseeing the favela. A key demand of Mr Bolsonaro alongside liberating gun ownership and easing controls on police use of lethal force, this would mean minors could be tried for serious crimes like an adult. Police customarily arrested minors only to find them back the next day committing crimes, the police officer said.

In Santa Marta, feelings are mixed about the election. While a shopkeeper says he is sticking with the PT, others want Mr Bolsonaro.

“Brazilians are betting on a change,” said José Carlos Pereira Duarte, a tourist guide in Santa Marta. “They don’t want someone who speaks politically correctly and just pretends to care.”

At the Bope’s hillside headquarters, emblazoned with the battalion’s badge, a skull with a dagger through it, officers are not authorised to give interviews. But the barracks talk favours Mr Bolsonaro, who has visited before.

Said one officer: “We need some bitter medicine.”

Get alerts on Brazilian politics when a new story is published