When super-rich couples fight about who gets what in a divorce, jewellery and watches, along with expensive art, wine and cars, often form part of the battleground.

With so much at stake in big-money cases, it is not surprising that some spouses look at ways of hiding their wealth so that it cannot be included in a settlement. For an unscrupulous spouse, jewellery can be an easy way of achieving this because it is portable and easy to conceal in a safety deposit box, for example.

“If you transfer money to a Swiss bank account ahead of a divorce, there is usually a paper trail and if you follow that it goes to the Swiss bank account,” says Simon Blain, partner in the family team at law firm Penningtons Manches. “There isn’t so much information relating to a security deposit box — a spouse may have to answer questions about whether they have a box but they might not give a truthful answer.”

London has a reputation as the divorce capital of the world because homemakers tend to be awarded relatively generous financial settlements. When the High Court is asked to divide up a divorcing couple’s wealth, any significant assets including watches and jewellery must be disclosed as part of the financial remedy hearings.

As well as “missing” items, disputes can often arise over the value of disclosed jewellery and watches, with one party asserting items are worth less than the other party claims, in an attempt to reduce the eventual amount of any settlement.

A judge issued a warning to an unnamed husband that he would receive £10,000 less from a house sale unless he helped his ex-wife find four missing pieces of jewellery

William Longrigg, partner at law firm Charles Russell Speechlys, points out that jewellery can be difficult to value and the original purchase price can differ significantly from the eventual resale value. As such, lawyers do not always include it in a final order. Yet in some cases such items become a focal point.

Ex-supermodel Christina Estrada was awarded £53m in 2016 after her divorce from the late Saudi billionaire Sheikh Walid Juffali after 13 years of marriage: part of their divorce dispute centred on the whereabouts of a blue diamond ring worth millions of dollars.

Mrs Justice Roberts, who heard the case, noted in her ruling that Juffali “would frequently buy very expensive jewellery” for Ms Estrada, including the valuable blue diamond ring which, in 2004, was flown to St Barts in the Caribbean by a representative of the jewellers Chopard. Juffali presented it to her with bows and ribbons while accompanied by a troupe of guitar players, according to the ruling.

The court heard that in 2011 Juffali removed the blue diamond ring from his property because of security concerns; Ms Estrada later asked for it back but it was not returned. The judge later made court orders that the whereabouts of the ring be disclosed. Juffali said the ring was no longer in his possession and had been gifted to a third party, according to the ruling. He later offered to pay her $2m in lieu of the ring, which he said had been bought for $4m.

In a separate divorce case in 2013, a judge issued a warning to an unnamed husband that he would receive £10,000 less from a house sale unless he helped his ex-wife find four missing pieces of jewellery.

The woman said her ex-husband had “concealed” the items, while he claimed she had “lost them”. At the time Mr Justice Holman said he was not necessarily asking the husband to hand back the jewellery, “but if she comes home and finds them sitting on the dressing table, that’s OK”.

A dispute about the value of jewellery formed part of the case of the late Scot Young, a businessman and fixer for Russian oligarchs, who was involved in a lengthy and acrimonious divorce battle. His wife was awarded £20m in 2013. He claimed he was penniless and could not afford to pay anything but she alleged he was worth millions.

Michelle Young had claimed that he led a luxurious lifestyle and that Young had a collection of watches worth in excess of £1m. On her 40th birthday she said he bought her a Graff diamond set worth £1m and that her wedding ring cost £1m.

Mr Justice Moor found that Young had “misled the court as to his finances to a very significant extent”. Nevertheless the judge tended towards the lower estimate: “Even allowing for a very significant uplift on cost when jewellery is purchased in retail jewellers, I cannot see that the jewellery can have cost as much as the wife alleges,” he said.

In the UK, the law is clear on the question of who keeps the engagement ring. The Law Reform (Miscellaneous Provisions) Act 1970 says an engagement ring is an “absolute gift” — except where one party can prove the ring was given on condition it be returned if the marriage did not take place.

The legal position is more complicated for items given as marriage gifts. “In some families, particularly Indian families, large amounts of jewellery are given as wedding presents to the bride,” explains Mr Blain. “There can be some dispute in a short marriage [as to] whether the items are given to the couple jointly, and whether one spouse should have to give the other the value of the jewellery [in the event of a split].” 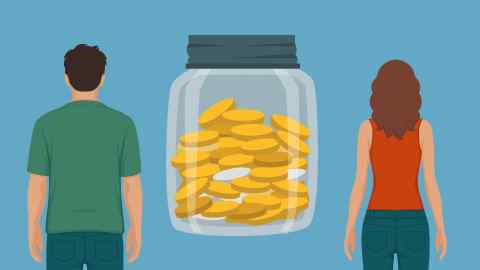 Couples can avoid disputes if they use pre-nuptial agreements to specify who would receive existing jewellery in the event of a divorce and to ringfence family heirlooms from disputes. In the UK, pre-nups are not legally binding, but since a Supreme Court landmark ruling in 2010 courts are likely to follow them, provided none of the parties has been put under pressure to sign them.

Mr Blain says: “Even if there is a not a pre-nup, a court will not usually award another party inherited assets if you acquired your mother’s jewellery collection part way through the marriage.”

Divorce lawyers say that more generally, jewellery, watches and other such assets can be relatively low down the list of assets to be argued about — and are often left out of proceedings because it is assumed the couple will divide up such items themselves.

Camilla Baldwin, a family lawyer who runs an eponymous law firm, says that although judges dislike ruling on disputes about personal items and prefer such matters to be dealt with outside the courtroom, they can still cause trouble. “It can be very sensitive and upsetting if a wife finds out that a husband wants to get back the pearl earrings he gave her and she suspects he wants to give them to his new girlfriend,” she says.

However, it is relatively rare for personal chattels to take centre stage in a divorce, says Mr Longrigg, adding that it is more common for couples to argue about who gets the dog, or items chosen together such as paintings, than tussle over watches or jewellery. “There are plenty of other things to fight about.”