How I Spend It: Sharleen Spiteri on her 1,000-strong shoe collection

The Texas singer says her story is all sole

Shoes are a weird fascination of mine – I probably have around 1,000 pairs, maybe more, in a room with shelves from floor to ceiling. I organise them by colour and style. And that’s not including my trainer collection, which I keep in a separate cupboard.

My obsession goes back to my grandmother, my mother’s mother, who was very elegant, a bit like an old film star. She had all her shoes handmade in Italy, and always wore gloves that perfectly matched them – that was her thing. She’d say: “No matter what you’re doing, always try to look as smart as you can, and always clean your shoes.” And then my grandad would teach us how to polish them – my cousins and I would sit around on a Sunday night, while he’d get a match, light the wax with a flame to soften it up and then get two little fingers in a cloth and show us how to shine them up. I’ve still got my grandfather’s shoe-polish box. And to this day I still look at people’s shoes – it’s the first thing I notice about someone.

I remember, in about 1973, getting taken by my gran and my mum to get my first pair of knee-length boots, like the ones Twiggy used to wear. They were red patent leather, like socks that you pulled up over your leg, and were really quite tight. I just remember thinking I was the dog’s bollocks in them.

Shoes tell such a story. I have every pair my daughter ever had, through her toddler years up until when she was about six, all the little baseball boots and sandals, and a lot of Clarks. I look at those shoes and I remember a specific point in her life, of what that shoe was and the way she’d run around in them. And it’s the same when I look at my own pairs – they are absolute pictures of a point in my life, a headspace that I was in, a moment in my timeline.

The oldest pair I have are tan brown flat boots that I got for Christmas in my early teens, which have a bridle kind of buckle around the ankle, just as Celine has done. I remember that my sister got the same boots – she’s three years younger than me – and to be honest I was a bit pissed off about that. But I was absolutely obsessed with those boots; I used to pair them with a little prairie dress and a corduroy waistcoat and I wore them to death. I’ve also got a pair of block‑heeled boots from my Diane Keaton era, when I was wearing that real kind of Dries Van Noten look. And also my original biker boots, from when Texas first started in the ’80s, which I’d wear with Levi’s 501s and a leather jacket. I remember they were hard to find, because I’m a size four and the place in Kensington Market that sold them only had men’s sizes. So a friend of my dad’s sent me a pair from New York, which were actually boy’s biker boots. In the early days of Texas I was wearing children’s shoes.

I picked up a lot while on tour, in various cities around the world. I remember going to St Tropez for the first time, and making everybody schlep all the way to this little shop that I’d seen in a book, to get some proper St Tropez sandals. The number of schleps I made my band go on just so that I could buy a pair of shoes is just ridiculous. I also remember being in Paris and going to Dior, when John Galliano was first appointed there, and buying his original satin ballet high heels with the twisted heel.

I started wearing more heels towards the end of the ’90s, when White on Blonde came out, and I was going to more parties and things like that. And at that point I was wearing a lot of Chloé, loads of Prada and a lot of Alexander McQueen – an awful lot of McQueen. Lee always did the most amazing carved heels, all this scribe work. One pair that I absolutely adore by McQueen are these black heels with an open toe and ankle strap that have a black silk flower along the back.

Some of the shoes I have are more like pieces of art – although I’ve worn them all at least once. Alaïa just makes the most beautiful shoes that you’ve ever seen, so does Francesco Russo and Dolce & Gabbana. I have lots of shoes that are probably collector’s items, like a dark-peach and red Lanvin shoe designed by Alber Elbaz. Or a pair of black leather boots from Tom Ford’s first Saint Laurent collection. The other day, I found my daughter trying to squeeze into them. Unfortunately, her feet are a size too big.

Texas’s new album Hi is out now on BMG. Sharleen’s mixtape is available on the Stack Radio app

HTSI
How I Spend It: shoe designer Christian Louboutin on his passion for Ancient Egypt 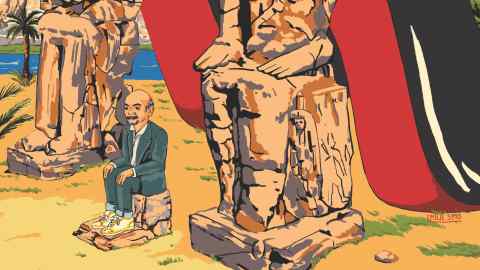