Greetings on this day that marks the beginning of the second week of the war in Ukraine.

It follows one of the most destructive 24 hours since the invasion began, as Russia acknowledged for the first time that nearly 500 of its troops had died and over 1,500 had been injured in Ukraine.

The admission came as the human and economic toll of the war became clearer, with civilian casualties rising fast in Ukraine and 874,000 people having fled abroad — a rate that the UN said would make it Europe’s biggest refugee crisis this century.

One of the economic consequences of the war we are exploring today is the possible deferral, for another year, of EU’s planned return to its deficit and debt rules that had been suspended during the pandemic.

We’ll also look at Poland’s image revival within the EU as a frontline country receiving most Ukrainian refugees and organising arms shipments for the resistance.

And with the war also having a knock-on effect on Europe’s agriculture, we’ll bring you the latest on what emergency measures are being considered to help the bloc’s farmers.

The war in Ukraine has the potential to scramble the European Commission’s expectations that it will be time to return to the bloc’s deficit and debt rules next year, writes Sam Fleming in Brussels.

Paolo Gentiloni, the economics commissioner, said Brussels would need to decide in two months’ time whether to go ahead with its plan to deactivate its so-called General Escape Clause next year.

The clause was invoked because of Covid-19 and suspends the debt and deficit rules in the EU’s Stability and Growth Pact. Based on current forecasts, the plan has been to reimpose the rules in January next year.

The European Commission will decide what to do in mid-May, when it presents its spring forecast, Gentiloni said yesterday. While it has not made up its mind what to do, the commissioner told the Financial Times that “we are not crazy bureaucrats” and that officials were ready to change course if the economic backdrop demanded it.

The current crisis and surge in energy prices would probably weigh “significantly” on the EU’s economic expansion without derailing it, the commissioner said. Inflation is a particular risk, with eurozone consumer prices rising by a record 5.8 per cent in February, although Gentiloni observed this was being driven by energy prices and bottlenecks, rather than overheating driven by rampant consumer demand.

Given the high uncertainty, the commission is not proposing to open any so-called excessive deficit procedures this spring against countries breaching the pact’s deficit limits. It will also not force member states to abide by its debt-reduction rules, given the risk that demanding a “front-loaded fiscal effort” ends up jeopardising growth.

The commission has also been quietly advancing on ways of reforming the Stability and Growth Pact. That means ensuring the rules play “an appropriate role in incentivising national investment and reforms”, the commission said in a paper yesterday.

While the commission is not saying it will ditch its annual assessments of member states’ budgets, it does want to shift emphasis to medium-term planning. The reform and investment cycle integrated into the post-Covid recovery plans could also play a role in its economic governance framework.

And there is the long-acknowledged need for a shift away from the labyrinthine structure based on elusive indicators such as the output gap. A better set of rules would be based on simpler indicators, the commission says, including for example focusing on net public expenditure growth.

President Emmanuel Macron of France is set to confirm today or tomorrow that he will run in next month’s presidential election, with polls and political commentators suggesting that the war in Ukraine has boosted his status as favourite to win and secure another five-year term. Macron, first elected in 2017, is expected to make a low-key announcement ahead of tomorrow’s deadline. (More here)

From zero to hero

From troublemaker-in-chief to leading from the front, Poland’s reputation — and perceived importance — in the EU has soared, thanks to its role in Europe’s response to the war in Ukraine, writes Henry Foy in Brussels.

The host of a critical logistics hub for EU and Nato states to deliver weapons to be shipped to Ukraine; the primary destination for refugees fleeing the conflict; and back at the bloc’s top foreign policy table alongside France and Germany: Poland has placed its continuing rule of law breaches and bitter fight with the European Commission firmly on the backburner.

The EU also announced yesterday it would allocate €500mn to Poland for humanitarian assistance, given that it is hosting the majority of Ukrainian refugees.

Germany and France’s foreign ministers were hosted by their Polish counterpart on Tuesday for a meeting of the Weimar Triangle — in recent years a rather overlooked trio — declaring in a joint statement that they together “share a special responsibility in maintaining peace, stability, and prosperity on the European continent”.

Georgia’s president Salome Zourabichvili told Europe Express she felt that in addition to Germany’s enormous policy U-turns last week, the re-establishment of Poland as an important security power was just as important for the defence of the region.

In an interview published this week, prime minister Mateusz Morawiecki said he used last week’s emergency EU summit to propose “the creation of a very strong European army that would be integrated into Nato”.

“The EU should double its defence spending from about €300bn at present to €500bn-€600bn,” he told Germany’s Berliner Morgenpost.

That marks a huge shift in Warsaw’s position. Just months ago Poland was one of the most vocal member states warning against any EU military force that might undermine Nato’s role as the continent’s primary defender.

When leaders assemble in France next week for a summit that will be dominated by Ukraine, do not expect to see any of the previous frostiness between Morawiecki, commission president Ursula von der Leyen and French president Emmanuel Macron. All of a sudden they are all speaking from the same script.

The EU is considering allowing farmers in response to the war in Ukraine to boost production using the 10 per cent of land they have to leave fallow to qualify for subsidies, writes Andy Bounds in Brussels.

Ukraine and Russia are among the biggest providers of wheat and animal feed to the EU, but all exports from Ukraine have stopped because of the Russian invasion.

The European Commission has agreed to consider the idea floated by agriculture ministers who met virtually yesterday in response to the crisis.

Janusz Wojciechowski, the agriculture commissioner, said he would look at the idea as an emergency measure for 2022 only. “The situation has changed,” he said. “We were not expecting this crisis.”

Farmers would sow only protein crops that they could feed to animals. The so-called set-aside land is normally planted with hedges or left as meadow or reed beds to ensure biodiversity.

Wojciechowski said the bloc was also considering paying for storage of crops and other interventions to support farmers, especially in the pig and poultry sectors.

Julien Denormandie, the French minister for agriculture chairing the talks, said the EU would also re-examine its “farm to fork” strategy, which aims to use more eco-friendly production methods, in favour of “food sovereignty”.

The EU is largely self-sufficient in most agricultural and food products, except protein crops and tropical fruits, and a net exporter.

But the war has sent European wheat prices to record highs, as well as increasing further the cost of fertilisers and other inputs.

Copa-Cogeca, which represents EU farmers in Brussels, warned of a fresh crisis “on top of the Covid one and the sharp price increases of all major agricultural inputs (ie energy, feed, fertilisers) in recent months”.

What to watch today 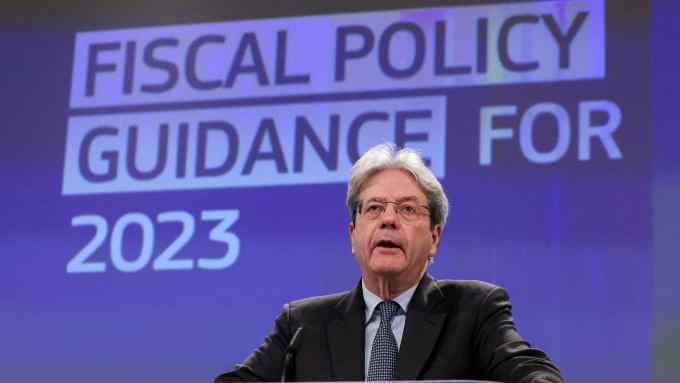