The quiet magnetism of Paul Mescal

Ahead of this evening’s press night of A Streetcar Named Desire, we find out the Irish actor’s thoughts on modern masculinity, taking on Marlon Brando – and mortgages

Paul Mescal is leaning back in his chair and laughing. A relaxed chuckle. We are in a north London restaurant, he’s having a Picante cocktail, and I have asked him about his style. “I’m not laughing at the question,” he says, trying to compose himself. “I’m laughing at the fact that it is a question that I will be asked. That’s, like, alien to me. I just find it funny… It’s not that I don’t think I’m stylish, it’s just that I feel like [other] people operate more comfortably in that territory than I do.”

It has been two and a half years since the Irish actor’s breakout role in the BBC adaptation of Sally Rooney’s novel Normal People. Since then, he’s been captured in a fair number of stylish moments – while promoting films such as Maggie Gyllenhaal’s The Lost Daughter, for example, or, more recently, Charlotte Wells’s indie hit Aftersun. Observing Mescal’s easy confidence, or seeing him nonchalantly pull off Cartier’s most coveted watches during our shoot, I’m struck by how his internal narrative seems at odds with his outward presentation. While Mescal says his “go-to is white T-shirt and jeans… or black tie with a twist”, there have also been boldly clashing prints. Colour. A gold dinner jacket. He laughs again. “It’s one of those things that I saw on the rack and I was like, “I love it, but I think it’s for somebody else.’ Then you’ve got it on and you’re like, ‘You know what? If I wear this, I’m not going to die. I’m going to survive this. And, actually, I feel good.’”

Today, the Irish actor is in super-relaxed mode, wearing Carhartt trousers, a band T-shirt, Acne hoodie and a baseball cap – pulled down to arrive at the restaurant incognito, but removed when we say hello. He’s midway through rehearsals for A Streetcar Named Desire, Tennessee Williams’s 1947 play set in a claustrophobic New Orleans apartment that focuses on the heat storm of sexual attraction, rivalry, abuse, poverty, class, loss and love unleashed when the wife’s sister comes to stay.

Mescal is playing the brutish, magnetic husband Stanley Kowalski, and he’s exhausted – today has seen them run through the epic scene three: a pivotal, climactic moment for his character that begins with a rowdy poker game, charges through heated arguments and culminates in an impassioned, almost feral, marital reunion. “It’s exhilarating,” says Mescal. “But I don’t have a lot of brain space for anything else.”

Stanley Kowalski is something of a “bucket list” part, as the play’s director, Rebecca Frecknall, recalls Mescal saying when she first approached him about the role. “It was one of the first plays that I properly studied,” says Mescal, “and I kind of fell in love with Tennessee Williams. Streetcar would be my favourite of his plays: it fits perfectly in his wheelhouse of brutal sexual landscapes, but there are pockets of beauty… characters who are able to articulate the beauty in the world.”

Prior to Normal People, Mescal had played the leads in both The Lieutenant of Inishmore and The Great Gatsby at Dublin’s Gaiety and Gate theatres – the latter before he had even graduated from prestigious Irish drama academy The Lir. And despite initially wondering if he was too young, Frecknall assures me that Mescal is “a stage animal… Stanley’s a really physical part, an impulsive kind of physical character. And that was something I was excited about with Paul: that he loves working with movement and he loves working on impulse. He’s not tentative; I don’t feel like he’s shutting things off to himself for fear of getting it wrong.”

First played on Broadway (and later on screen) by a 23-year-old Marlon Brando, in 1947, the role of Stanley is major swagger to rise to. “The main challenge of playing Stanley is quite simply conveying that Brando bestiality in an interesting way, and it’s rarely done,” says theatre critic Michael Coveney. “Mescal was amazingly brilliant and vulnerable, as well as sexy, in Normal People. Can he do it on stage, though – and can he rough it up a lot more… this is a violent, flat-out tragic drama, as modern as the day it was written.”

It’s a sinewy, knotty challenge and Mescal is keen to draw out the empathy. “I like Stanley. I think you have to. I obviously don’t feel sympathy for what he does, but I think it’s my job to understand why he does that… [and to get] an audience to commit full-blooded to the anger and the rage of him, but also to hopefully recognise him as somebody who’s not… just, like, one thing.” For Mescal, seeing Streetcar through Gen Z eyes, “Stanley is still definitely an archetype that exists – and he’s still interesting to us now. That kind of raw man who is very much in his body; a smart man who has fought to be in the position that he’s in; a very sexualised man; and someone who is present in the world and doesn’t really care about anything else other than his flat, his car, his wife, his home.”

Mescal’s nuanced explorations of masculinity have helped to define his career so far. Most recently there is Aftersun, a poignant vignette about a lonely, lost young father, Calum, and his 11-year-old daughter holidaying in Turkey in the 1990s. Watching Mescal’s shoulders heave as he sobs on the side of the bed in a wordless expression of desperation is surely one of the year’s greatest cinematic triumphs. FT film critic Danny Leigh calls his performance “quietly spectacular”.

“I’m interested in the two extremes,” Mescal says of Calum’s contrast with Stanley. “Like the extreme of male vitality, brutality and physicality. I’m interested in that as a shape and why men choose to be that way.” Mescal’s upcoming role in God’s Creatures, with Emily Watson, is “a similar kind of template” – another man who commits a sexual assault. In contrast, “Calum and Connell are a little bit more in their brains and heads and hearts.” He shrugs: “Ultimately, none of these men is successfully navigating the world.”

I’m interested in the extremes of male vitality and brutality”

Mescal is originally from Maynooth, the university town in County Kildare, west of Dublin, and speaks fondly of his own family. His mother, a police officer, and his father, a teacher, are still based there, while his younger brother Donnacha now lives in New York and sister Nell in London. Romantically linked since August 2020 to American indie-rock musician Phoebe Bridgers, Mescal has just bought a property in Ireland. “After [Normal People] came out I wanted to actively move away from [Ireland]. And in the past two or three years, I felt a desire to think maybe more long-term about where I would spend time off between jobs.” The lure of the Emerald Isle proved irresistible: “It’s a beautiful part of the world. It’s peaceful. And the people are kind.”

Talk of buying a house is the only time in the conversation when Mescal seems at all anxious. It’s a big move, overwhelming even: “I hope I don’t hate it in five years… I’m afraid of that.” He laughs, nervously: “It’s just… all of those burgeoning adult things like having a mortgage… It’s… slightly stressful. But exciting. You have to grow up at some point.”

He’s already been on one helluva learning curve. The media coverage around the time of Normal People often made for galling reading – the response to his newly anointed heartthrob status at times tinged with lasciviousness; at others, all-out perve. Mescal takes it in his stride. “The honest answer is I choose to not be stressed about it,” he says. “I’m aware that it was, like, maybe a little bit fucked-up. But I’m not trying to reclaim that. I’m just, like, it has been happening to women since the beginning of time with the media – that objectification. It’s maybe just a rebalancing – hopefully that will iron itself out.” He adds: “And I hope it does, because it’s not fun.”

More challenging perhaps is navigating the balance of newfound stardom and family relationships. He is open about having a therapist to help: “It’s to keep sane. It’s also, like, life gets in the way. The thing that I find difficult is sometimes that life can be shit, but work can be really fun, but there’s a guilt thing of, ‘Oh god, I’m having fun at work but I’ve got to do something when I go home that’s not going to be fun.’” He pauses. “I think therapists are very, very useful people in the world.”

It seems to be working. “He cares deeply about what he does but he never takes himself too seriously – only the work itself,” says Saoirse Ronan, who stars with Mescal in the forthcoming dystopian sci-fi thriller Foe. “Which in my book is the best way to sustain a healthy work life and a (relatively) calm head!” And although he has only been in rehearsal with Frecknall for nine days when we speak, “I feel like I’ve worked with him for ages,” she says. “He has an easy open way.”

“Intelligent, collaborative and open” is also how Lenny Abrahamson describes Mescal (who directed him in Normal People): “a joy to be around on set”. He adds: “Paul is a person, I think, who needs to believe in what he’s doing. It’s not just about being good; for him it’s about the project being worthwhile… I’ve been so impressed by the choices Paul has made. ”

HTSI
The revelations of Cate Blanchett 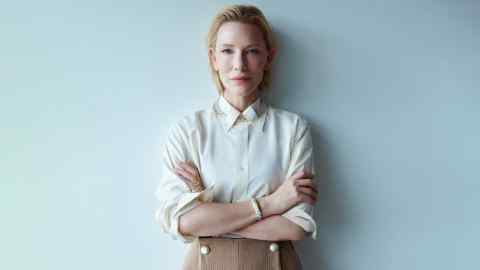 Mescal holds up the careers of Adam Driver and Joaquin Phoenix as guiding lights (“They make interesting choices. And even if they’re in something that isn’t necessarily great, they’re normally consistently good”). Instead of taking on a lead role following the success of Normal People, his first move after was a supporting part in the Maggie Gyllenhaal-directed The Lost Daughter. Following Aftersun and God’s Creatures comes Benjamin Millepied’s reinterpretation of Carmen while, a way down the line, there’s first world war love story The History of Sound, with Josh O’Connor. Each of them choices, says Mescal, driven by a desire for something that “stretches you in a different way”.

His MO is “soak it all up, like, soak up the time that you can get with Olivia. Just soak it up.” The upshot? “I’m a better actor now than I was when I started Normal People because of the people that I work with.”

It’s not a revelation that has the Brando swagger. But it has the Mescal humility, intensity and focus.