California became the first state in the US to mandate that all new homes should have solar power by 2020, cementing its status as a trailblazer in clean energy.

The new building standards also include revised air ventilation and lighting requirements to reduce energy use, and will bring solar power into the homes of thousands of people. State officials promise that the higher cost of the houses will be more than offset by lower energy bills.

“The buildings that Californians buy and live in will operate very efficiently while generating their own clean energy,” Andrew McAllister, a member of the California Energy Commission, said at the time. “They will cost less to operate . . . and provide a platform for ‘smart’ technologies that will propel the state even further down the road to a low emissions future.”

To advocates of clean power supply, California’s decision reflects the transformation gripping the energy industry and the role of the citizen in shaping their energy use.

Government policies to reduce carbon emissions, coupled with the falling costs of renewable power and advances in technology, are helping to undermine the traditional ways in which energy is produced, stored and consumed.

The accepted model of a utility sending power from a gas or coal-fired power station through a central transmission grid to customers is dying. In the new world order, consumers will take a more active role in the management of their energy’s consumption and its origin.

They will use “smart” devices that will control heating and lighting remotely and advise if their boiler is inefficient. They will generate power through solar panels on their roofs, for example, and either store any excess power on-site or sell it back to the grid.

But experts warn that the change is still in its infancy. “We are still at the very early stages of this. Most consumers are still consuming energy in a passive way,” says Richard Howard, head of research at Aurora Energy Research, the consultancy. “A big challenge will be consumer behaviour.” 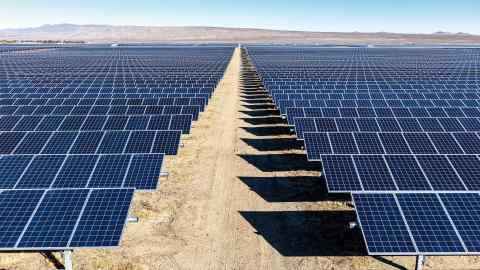 Digital technology will speed the shift. Executives at the world’s largest power companies, including Engie of France and Centrica in the UK, are investing in technological offerings to retain their customer base and help safeguard profits.

Iain Conn, group chief executive of Centrica, owner of British Gas, describes the transition as one where power and influence is moving “towards the customer”. The company has developed services such as Hive, a smart thermostat that allows users to control their heating and hot water via their mobile phones.

The promise of lower energy bills as well as the satisfaction of mitigating carbon emissions remain attractive to consumers.

In Germany, for example, where residential consumers face high electricity charges partly as a result of green levies, taxes and network charges, the uptake of rooftop solar panels has been high.

“The domestic supply tariffs are now so high that the economics of self-generation look very good in Germany,” says Aurora’s Mr Howard.

Aurora predicts that rooftop solar power capacity installed in homes and commercial sites will more than triple in Germany to 80GW by 2030 — up from 25GW in 2016.

Up to half of this forecast capacity is expected to be paired with on-site batteries that will store energy when the sun does not shine.

Longer term, consumers will move away from being dependent on distribution networks for all or part of their energy needs, industry experts say. Micro­grids — localised networks of electricity production and control — are becoming more commonplace.

In Brooklyn, New York, residents of a social housing complex are benefiting from their own microgrid, installed by Italy’s biggest utility, Enel, through Demand Energy, a company it bought in 2017.

Solar panels produce clean power for air-conditioning units and any time the panels capture more energy than the estate needs, a large lithium-ion battery system stores the electricity for later. The system is estimated to have cost about $4m to install but has helped reduce the property’s annual electricity bill by about 10 per cent.

Instead, the company is looking to “revenue sharing models” that enable consumers to participate actively in energy markets.

One way would be by providing battery storage solutions that help customers shift or reduce their electricity consumption at peak periods in response to financial incentives.

Back in California, not all estate agents are convinced by the benefits of the state’s mandate for solar panels.

Many solar companies put homeowners on onerous leases that can lead to high costs, while the technology itself also needs to be replaced regularly, says Elizabeth Weintraub, an estate agent in Sacramento.

“The millennial buyers are more open to energy-efficient and smart homes,” she adds.

“But a lot don’t understand how it works. For many it will be an upgrade that they won’t want to pay for once they realise the costs.”