No one comes close to embodying the US stock market boom quite like Cathie Wood.

Ark Invest, the investment company the Californian native founded in 2014, was made for those who fancy a version of the tech-driven bull market on steroids.

Harnessing social media with a skill rarely seen on Wall Street, Wood has attracted legions of retail investors and billions of dollars by pitching aggressive bets on companies and technologies she says will reshape the world, most famously Tesla. The results have been spectacular — until now.

“As great as Cathie is at identifying the themes and the winners and losers, her biggest blind spot is managing risk and volatility,” said Lisa Shalett, chief investment officer at Morgan Stanley Wealth Management and Wood’s former boss at asset manager AllianceBernstein.

The Ark Disruptive Innovation ETF — the company’s $17bn flagship fund that combines an exchange traded fund structure with an ability to pick stocks — has generated average annual gains of about 40 per cent over the past five years.

Based in newly established offices in St Petersburg, Florida, Ark has been one of the biggest winners from the market’s embrace of moonshot bets on disruptive companies, an approach whose risks the Federal Reserve has helped gloss over with waves of monetary stimulus.

But with Fed chair Jay Powell last month signalling a determination to scale back support, Ark now faces the toughest test in its short history as sentiment turns against the hot but often unprofitable technology stocks that have powered its rise.

Despite a recovery this week, the flagship fund, often known by its stock market ticker ARKK, is down 17 per cent this year and 34 per cent off its February peak. From a peak in the same month of $61bn, assets in the company’s overall stable of ETFs have fallen to $34bn, according to Bloomberg data.

While ARKK’s record of average annual gains is stellar, many came when it had a much smaller asset base. Amundi, one of Europe’s largest asset managers, estimates that the average investor in the ETF is now underwater.

Just as the fund’s heavy bets on often small, potentially disruptive companies turbocharged its performance on the way up, that concentration — hailed as bold bets by Wood’s fans but deemed reckless by critics — has left it particularly exposed as the tide turned.

By December 7, all 44 of its holdings were off their peak, and just six have escaped sliding into a bear market, according to data from Ramin Nakisa, a former UBS analyst who now runs consultancy PensionCraft. About half have fallen at least 50 per cent from their 2021 peaks, with five slumping more than 70 per cent or more.

ARKK’s volatility has increased this month, with the swings in its value eclipsing the sharp moves in the S&P 500.

Were it not for the 48 per cent gain that Tesla, the fund’s biggest holding, is still sitting on this year, the picture would be much uglier. Without the electric car maker, the fund would be down by almost a quarter in 2021, according to George Pearkes, a strategist at Bespoke Investment Group. By contrast, the S&P 500 is up 25 per cent.

“Ark Innovation is a high-risk, high-return strategy that is focused on the most promising but most expensive parts of the market,” says Vincent Mortier, deputy chief investment officer at Amundi. “Most of its names are very sensitive to interest rates and so if there is any kind of repricing of this part of the market then the ETF will be more prone to the downside than the rest of the market.”

The turmoil of recent months feels a far cry from a golden stretch for Ark and Wood, a devout Christian whose successful bets on everything from genomics to bitcoin spawned a range of merchandise, including a T-shirt that depicts her riding a bull with the slogan: “The Queen of the bull market.”

But Wood, who declined to be interviewed for this article, has faced setbacks before. She quit AllianceBernstein in 2014 after the asset management group rejected her pitch to launch an actively managed ETF business devoted to disruptive and innovative companies.

The 66-year-old established Ark Invest — named after the Ark of the Covenant — with her own money. She then received seed capital from Bill Hwang, a friend from church now infamous for the implosion in April of his family office, Archegos Capital Management.

Wood has told the Jesus Calling podcast that she founded Ark because of a calling from God, describing the business as “about allocating capital to God’s creation in the most innovative and creative way possible”.

Although not the first active ETF, Wood’s move was still an unorthodox one in an investment universe then still firmly wedded to the model of passive funds that simply mimicked an underlying index. Actively managed ETFs aim to combine the freedom of a traditional fund manager to make big bets irrespective of any index with the lower fees, transparency, liquidity and favourable tax treatment that are the hallmarks of ETFs.

Assets run by actively managed ETFs have swelled to almost $440bn at the end of October, according to ETFGI, an industry data provider.

“Cathie has been really great for the asset management industry in bringing more diverse investment talent and perspective,” says Katie Koch, co-head of the fundamental equity business at GSAM. “She has pioneered actively managed ETFs and democratised access to innovation for the retail market, engaging a new generation of savers.”

Alongside ARKK, the company has 10 investment vehicles dedicated to themes from cryptocurrencies to space exploration. But investors have yanked $558m from the funds in December, taking the total outflows over the past five months to $6.5bn, according to Morningstar.

While the Fed’s message that the era of monetary largesse is ending shook the overall market, few of Ark’s direct peers are suffering in the same way.

Of the 69 funds with the heaviest weighting of so-called US growth stocks, 30 are up 10 per cent or more this year and 70 per cent are in positive territory, according to Morningstar strategist Robby Greengold. Only one has fared worse than ARKK.

One vulnerability in Ark’s model is its focus on innovation — a strategy that, with the notable exception of Tesla, means it has eschewed small stakes in Big Tech for concentrated bets in smaller companies.

ARKK owns more than 5 per cent of 17 different companies. In some cases, the size of its stake in smaller companies appears to have helped inflate their stock price when investors were ploughing money into Ark, analysts say. Now, as the funds bleed money, it is having the opposite effect, deepening the pain for Ark.

Ark Invest, for example, built up a 15 per cent stake in Proto Labs, a tiny 3D printing company in Minnesota, helping catapult its market value from less than $3bn at the start of 2020 to a peak of almost $7bn earlier this year. But since then Ark Invest has nearly halved its stake and Proto Labs stock has collapsed.

“If you’re investing in very illiquid stocks, you’re bidding them up as you get inflows,” says Edwin Dorsey, a short seller and author of the Bear Cave newsletter. “But on the downside it works in exactly the opposite way where you’re selling out of positions.”

Alongside her ability to sell an investment narrative, Wood has also offered investors a high degree of transparency and real-time disclosures into Ark’s holdings. However, that can also be a double-edged sword, says Amundi’s Mortier.

“Full transparency allows you to advertise your holdings but at the same time it can become a weakness,” said Mortier. “When a transparent ETF is changing its allocation it has to publish this in real time, and then, given its size, it can become a market-moving signal.”

As another pandemic-dominated year for markets draws to an end, there are signs that some retail investors have not lost faith. The message board Reddit is teeming with “buy the dip” memes that urge investors to keep buying stocks.

Indeed, during an appearance on CNBC on Thursday, Wood’s conviction in her investments appeared undimmed. Talking up the potential of Tesla and bitcoin, she declared: “we are nowhere near a bubble.”

That will not be enough to ease the fears of those who have long worried that Ark’s spectacular rise could be matched by a potential unravelling if investors’ sentiment truly shifts.

“Given the concentrations and risks in the portfolio, it’s setting up as a disaster,” says Marc Cohodes, a short-seller who is not wagering against Ark. “It’s a highly risky set-up and it’s sort of unprecedented because no one has seen an ETF unwind to the extent that this one could.” 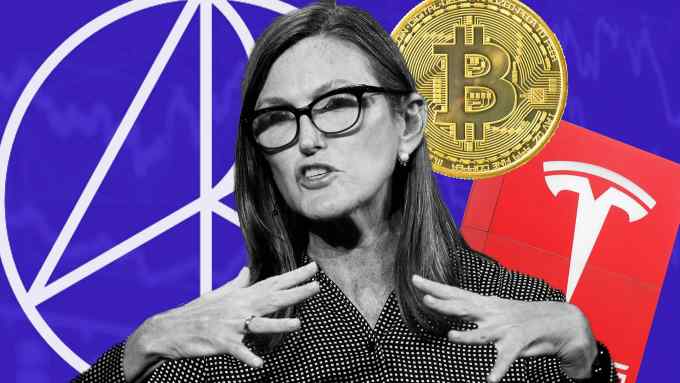