Last year produced aggregate profits of $300bn, with tech stocks providing much of the boost

Last year’s big drop in the share price of Tesla, Amazon, Apple and Facebook owner Meta has helped deliver bumper profits for investors betting against US stock markets in a sharp reversal of their recent fortunes.

Short sellers — investors who believe an asset is overvalued and its price will fall — lost about $572bn in US markets between 2019 and 2021, crushed by low interest rates and a rapid asset price recovery from the outbreak of Covid-19. But last year produced aggregate profits from the strategy of $300bn, according to S3 Partners, a specialist New York-based consultancy that tracks short positions, with tech stocks providing much of the boost.

The revival of the strategy suggests stockpicking investors could reap outsized returns in the coming years now that individual companies and sectors are plotting more diversified paths in markets rather than wafting higher in unison.

“Shorting in the information technology sector was like [shooting] fish in a barrel with 70 per cent of all the constituents in the sector having a down year and $9 out of every $10 shorted delivering a profitable trade,” said Ihor Dusaniwsky, managing director at S3, whose analysis on short selling stretches back to 2018.

Tesla’s share price dropped 65 per cent in 2022, providing the biggest payout of last year for short sellers with mark-to-market profits of $15.8bn. Tesla bears feasted while Elon Musk sold almost $23bn of his holdings in the electric-car maker to fund his takeover of Twitter — a deal that itself resulted in losses of more than $500mn for short sellers in the social media stock last year after the board sued Musk to adhere to his original $44bn offer. “Twitter shorts got clobbered by Elon Musk’s purchase,” said Dusaniwsky.

Tech stocks put in an almost universally dire performance in 2022, with the Nasdaq Composite index falling by a third. By contrast, betting against oil stocks like ExxonMobil, Occidental, Chevron, Marathon and ConocoPhillips resulted in losses as oil prices rose in response to Russia’s invasion of Ukraine. But other sectors generated winners and losers, making it trickier for investors to pick the right short bets, Dusaniwsky noted.

Securities lending — a practice where investors can temporarily transfer stocks, bonds and exchange traded funds — is the bedrock of short selling, and it was in high demand in 2022.

Large institutional investors that agreed to lend out assets to short sellers and other market participants drew in global revenues of $12.5bn in 2022, an increase of 14.8 per cent on the previous year, according to S&P Global Market Intelligence.

Investors raised almost $4.8bn by lending out US stocks last year with the near 20 per cent decline in the S&P 500 encouraging short selling activity, most notably in the software and electric vehicles sectors.

The collapse in prices for cryptocurrencies including Bitcoin also led short sellers to seek targets in the US software sector with Marathon Digital, MicroStrategy and Riot Blockchain, now renamed Riot Platforms, seeing significant percentages of their shares out on loan.

Nasdaq-listed Beyond Meat also provided rich pickings for short sellers after slashing its annual sales forecast for 2022, which led to an 81 per cent drop last year in the market value of the plant-based food provider.

“Beyond Meat was one of most popular stocks for borrowers, generating securities lending revenues of $195.3mn last year,” said Chessum.

Lending of exchange traded funds has accelerated over the past decade as these highly liquid index tracking vehicles have become widely adopted by US investors. Securities lending revenues from ETFs reached $847mn in 2022, up 34 per cent on the previous year.

John Thornhill
Revenge of reality: how technology was discounted in 2022 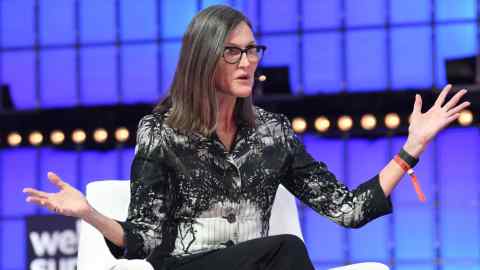 The increase in fees helped to push up revenues from securities lending earned from government bonds and corporate bonds to $1.8bn and $963mn respectively.

Borrowing demand for UK gilts increased significantly during the crisis that destabilised parts of the country’s pension sector last year. UK government bonds generated $182.4mn for lenders in 2022, an increase of 45 per cent on the previous year.