Lead the way with 50% off
How To Spend It Interiors

Gary Kemp: ‘I went to an antiques shop with my first Spandau Ballet pay cheque’

Sign up to myFT Daily Digest to be the first to know about Interiors news.

I grew up in a working-class house in Islington, living on one floor of a building, sharing an outside loo with two families and an old lady who lived downstairs. Everything was on the HP; we owned nothing but the cat. That was my culture. But I was also culturally aspirational. I did a lot of reading as a kid and I got really into architecture and furniture design. It started with Charles Rennie Mackintosh, then I went a bit further back to William Morris and the arts and crafts and aesthetic movements.

What turned me on about Morris and his contemporaries was that there was this gang of young designers who were seeing the world differently. They wanted to stake a claim in design in the same way that we were trying to do with the New Romantic Blitz Kids around 1979. We were all in this club trying to design the culture: there were fashion designers and filmmakers and journalists, in the same way that Morris had his book cover designers and ceramicists and painters. They must have been the rock stars of their day, breaking all the rules and sleeping with each other’s muses; wearing quite strange clothes for the time, a lot of almost medieval kit. Another key driver of my interest in design was Bob Geldof. I went to his house early on, and he was a great collector of antiques. There was something about being surrounded by all the ghosts of history, and he set up his house in a way that made it seem like it had lived in many centuries.

All of which meant that when I found myself in Kensington Church Street after I’d got my first big pay cheque in Spandau Ballet, I went into an antiques shop and came out with a Philip Webb for William Morris chair and William Burges corner hanging cabinet. Both pieces felt way ahead of their time. I still have them. It took me a little while longer to discover Edward William Godwin. It was through a dealer called Paul Reeves who also had an antique shop on Kensington Church Street that I got a lot of my Godwin education. I’d also been to the V&A and seen one of his famous japonisme sideboards: the earliest versions may date from the late 1850s but it is a spectacularly modernist piece of geometric design. That made me want to learn more about him. I read he’d run off with Ellen Terry, the actress. And my hunger to find out more led me to lots of people’s diaries. Yeats writes about going to Oscar Wilde’s house as a young man, and he describes the furniture designed by Mr Godwin. It’s spindly and white. When I was reading that there hadn’t been any white furniture by Godwin discovered. Since then I know of a couple of chairs that have come up. So Wilde knew him. Max Beerbohm knew him. I became interested in the whole circle. And I think that’s the joy of buying furniture – if you can sense what it must have been like at the time when it was first crafted, how outrageous it must have been at the time.

In my collection I now have around a dozen Godwin pieces, including a hanging cabinet, a “Jacobean” chair, and a strange sort of mirror thing. Some of the pieces have been to exhibitions around the world. Would I have got on with Godwin? He was variously described as a cad, a crook or the Wicked Earl. He had two children with Terry, one of them the great theatre director-designer Edward Gordon Craig. But was he the greatest father? No, probably not. And did he leave Terry in the lurch a bit? Yes. But surely we’re not about to cancel Godwin. I don’t know how bad he was as a human being, but I quite like this story of him and Terry when they’ve run off together and they’re living in sin. They’re in this house after Godwin has just taken her away from GF Watts and they’ve got this incredibly strange aesthetic, with Venus de Milo in the middle of the drawing room and rush matting, and they’re not married and they’ve got kids. But what really outraged the locals was that they used to go out without hats.

How To Spend It
Eimear McBride: ‘I’d come to know London just walking it, long before having any real sense of its layers’ 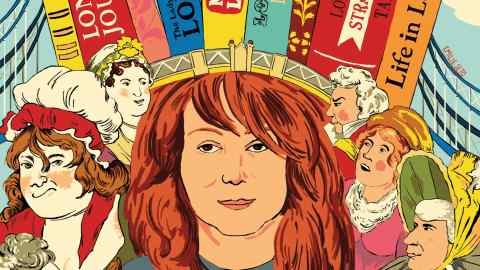 I’ve had to step aside slightly from my Godwin obsession. I’ve had lots of young boys for the last few years; and though all the furniture is used, if you have a nine-year-old, a 12-year-old and a 17-year-old that changes things up a little bit. And since I married my wife 18 years ago we’ve moved house and mixed up my collection with a few more different periods.

I did get offered one of the famous 1850s cabinets a long time ago, but they really are more expensive than you can imagine.

Gary Kemp’s new album Insolo is out on Columbia