A bloom of one’s own: when florists turn farmers

In search of rare, idiosyncratic colours, scents and forms, these floral designers turned growers have gone back to the roots

When you grow flowers yourself, you watch how something thrives – or doesn’t – and you understand the plants in a fundamental way,” says floral designer Milli Proust. “And when you get those really amazing flowers, the whole design revolves around that one special thing.” Proust started to raise chemical-free crops in her one‑acre West Sussex garden four years ago, and today every corner of her cutting garden is packed with the bulbs, perennials, roses, shrubs and annual flowers that fuel her work for private clients, weddings and events. The latest additions are peony beds with her favourite luscious “Claire de Lune”, as well as “Duchesse de Nemours”, “Marie Lemoine”, and the raspberry-ripple “Germaine Bigot”. “I love it when they look like something from a fancy French patisserie,” says Proust.

Seasonal and more sustainable, the micro farm has allowed Proust to grow varieties that are not available from commercial growers. These specialised cultivars may have a more interesting form, extraordinary scent or unusual colours; and, grown outdoors, they have a completely different aesthetic to flowers grown on an industrial scale.

“Garden-grown ingredients have so much personality and charisma,” agrees California-born Emily Avenson, whose Fleuropean flower school is based in Aubel, in rural Belgium. Her favourites are “confused colours” – the shape-shifting blush-to-mauve of the delicate Phlox drummondii “Crème Brûlée” or the peach-to-pink daisies of Cosmos bipinnatus “Apricot Lemonade”. “Choosing to grow from seed, we gain access to this whole new world of seemingly infinite possibilities that simply can’t be sourced from wholesale providers,” she continues. “These are all ‘neither here nor there’ colours that work wonderfully to create subtle shifts in shades.”

Avenson was inspired to start growing her own flowers after she grew her wedding flowers as a complete amateur: her first experiments relied on information printed on seed packages. Until now her flower school – and her design aesthetic – has been somewhat of an anomaly in Belgium. “But a younger generation of flower growers and florists seems to be more in tune with this intentional, intuitive way of working,” she says.

“It’s like being the artist who makes his or her own paint,” says floral designer Kitten Grayson, who has recently set up her own plot just below King Alfred’s Tower near Bruton, Somerset, where she grew up. To have a grower’s garden was a pipe dream that she had imagined would be five years in the making. But then the pandemic happened and she fast-tracked her long-term plan.

After working on a biodynamic farm in her 20s and collaborating with Fern Verrow’s Jane Scotter on biodynamic flowers for Heckfield Place, Grayson was determined to grow with the same principles. “The method of growing by the moon really sang to me – this idea of happier soil and happier plants,” she adds. Serendipitously, she found a plot where the artist owners – Quentin Seddon and his wife, Rowena, whose son Charlie runs the Knepp Estate in Sussex – had been working the land organically for decades with beds, polytunnels and services already in situ. Last September, she started preparing the soil with homemade compost and manure, and planned a calendar of flowers to fill the coming year, including a succession of spring bulbs, roses and shrubs as well as annuals. The flowers grown this way are, she says, “extraordinary – they are just worlds apart.”

Grayson is part of the burgeoning slow flowers movement. The membership of the UK-based Flowers From The Farm – which for 10 years has linked together artisan growers who produce flowers as sustainably as possible – has grown by 75 per cent over the past two years, and 65 per cent of the organisation’s membership also offers floristry services. Flora Starkey, whose clients include Alexander McQueen, Dior and Sotheby’s, now has her own growing patch at Westhill Farm amid 30 acres on the Dorset/Devon border near Lyme Regis. Sister duo Alex Nutting and Jess Lister of Aesme Studio Flowers are growing in Hampshire, and Florence Kennedy, of Petalon, last year relocated her business from London and began growing in Cornwall.

The provenance of flowers has become important in the same way that we think about the source of our food. Awareness has boomed thanks to successful lobbying on social media, as well as high-profile annual events such as British Flowers Week in mid-June, which promotes home-grown blooms that do not contribute to air miles and are not grown under intense farming methods that use fertilisers and pesticides.

Erin Benzakein, author of Discovering Dahlias and The New York Times bestseller A Year in Flowers, grows on Floret Farm in the Skagit Valley, an hour north of Seattle, in Washington State. She has witnessed a similar explosion in America – Floret itself has grown from two acres to 24. “Fifteen or 20 years ago, there were probably only a few dozen small-scale flower farms like Floret in the US. Today there are thousands,” says Benzakein, who this summer stars in a TV series about her flower farm on the Magnolia Network. “Consumers increasingly want to know how, where and who produced what it is they are buying.” 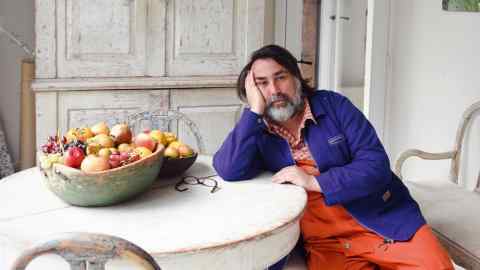 And that goes hand in hand with a growing appreciation for wilder, more naturalistic flowers. When Juliet Glaves first started growing flowers on her five-acre Shropshire farm 13 years ago, very few florists were interested in her blooms, preferring the pristine uniformity of imported, largely Dutch flowers. Now it’s the idiosyncrasies of locally grown plants – the wonky stems and lack of uniformity – that many floral designers seek. Glaves worked as a television director and producer before spotting, via a programme she was working on, the potential of British-grown flowers. Since then she has juggled her intense work as a grower with events and installations where her work always has an abundant, gathered-from-the-garden feel. She also takes on one-off commissions, such as her stint as florist on the set of Paul Thomas Anderson’s Phantom Thread. For her, there is endless inspiration in the growing fields. “It’s an intrinsic part of the design process – the curve of a stem, petals illuminated at sunset, the movement of flower beds in the wind – as well as being able to work with a bloom at every stage of its life cycle.”

This is a collaborative endeavour. Grayson says that, despite developing her own set-up, she still wants to support other like-minded growers. The goal is to show customers what true seasonality means: “People are becoming mindful of sustainability and have started coming to us because of our ethos. That is really exciting.”

It’s a linked-up and international movement too – Erin Benzakein is currently hosting Chatsworth’s cut-flower grower Becky Crowley on a working sabbatical. In a similar vein, she has created a global map of like-minded, almost entirely female growers, available on the Floret website.

“This is most definitely a women-led movement,” says Benzakein who, after fielding a three-year waiting list for her sell-out workshops, has now created online courses for wannabe growers. “All the newest books on flowers are authored by women. And virtually all of the top floral design instructors are women. And everyone is eager to source the most coveted seasonal blooms.”