Two large international law firms are offering fertility benefits to their UK-based staff for the first time, including egg freezing and in vitro fertilisation (IVF), following a boom in these schemes in the US.

Californian law firm Cooley is offering reimbursements of £45,000 for treatments, while London-based Clifford Chance has extended its health insurance to cover investigations and treatment, up to a cost of £15,000.

Cooley, based in Palo Alto, is using the services of Carrot, a benefits company for employers, which covers adoption, egg freezing and surrogacy.

The offer applies to Cooley employees and their partners “who want to have a child or preserve their fertility, including single parents by choice and LGBTQ+ individuals and couples”, the firm said in a statement.

The extension of Clifford Chance’s health insurance to cover fertility follows the firm’s decision to offer advice on menopause, fertility and parenthood through the health app Peppy. The firm noted high take-up of fertility advice, prompting a review of its policies.

Such services are currently rare in Britain, but increasingly common in the US, where large companies offer family planning as a way of holding on to staff and levelling the playing field between men and women and heterosexual and same-sex couples. Clifford Chance and Cooley offer fertility benefits in the US.

Last year American law firm Weil, Gotshal & Manges partnered with fertility company WINFertility to offer services including up to three rounds of IVF, which can cost upwards of $12,000 per cycle. It also offered staff egg freezing with one free year of storage and reimbursement for surrogacy and/or adoption.

Akin Gump rolled out a similar package in March.

Fertility services can cost thousands of pounds and are in high demand due to worsening global fertility rates.

According to the World Bank, the worldwide fertility rate dropped more than 50 per cent in the past 50 years, while data from Fertility Network UK said one in six couples in the UK were affected by fertility issues, with most forced to take time off work. 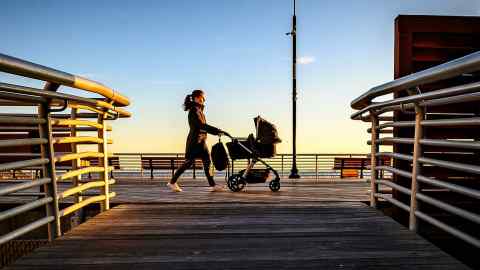 In the UK, firms have been slow to offer comprehensive fertility measures, though many have introduced shared parental leave or childcare support. Other areas of the City have gone further.

Goldman Sachs launched in 2019 the “Pathways to Parenthood” programme including up to $20,000 to cover the costs of extracting eggs or purchasing donated eggs and increased stipends for adoption and surrogacy.

It comes after the bank said in 2018 it would courier working mothers’ breast milk to their children if the women were travelling for work.

The offer of egg freezing could be seen as a cynical move on the part of large companies to reduce the number of career breaks taken by women. But employees have reacted positively.

Dana Denis-Smith, a former lawyer and founder of the First 100 Years project that charts the history of women in law, said: “Fertility interventions should certainly be part of the benefits package, as it recognises that people in law firms are working in high-stress environments that can affect or delay their prospects of becoming parents.”

But she added: “The more difficult piece of work is changing attitudes and structures to support parents in maintaining and flexing professional life after the baby is born.”

Fertility services at law firms add to lucrative perks such as gym memberships and Deliveroo allowances, as well as expensive healthcare and dental plans.

Taking the ‘cradle to grave’ mantra a bit too far / From John Rhodes, London SE15, UK