The UN has been holding annual climate change talks for 20 years but the two-week COP21 meeting that starts in Paris on Monday is a much more significant meeting than most.

Who is attending and what are they trying to achieve?

Delegates from 195 countries are due to finalise an agreement to cut global emissions of the greenhouse gases scientists warn are on track to warm the planet to risky levels.

Governments have sought to do this since 1992, when they met in Rio de Janeiro and agreed the first global warming accord — the UN Framework Convention on Climate Change. Its chief aim was to stabilise greenhouse gases at a level that would avoid dangerous levels of warming.

But with most of those gases coming from burning fossil fuels — which power almost every country’s economy — the talks have been deadlocked for decades as governments bicker over the extent to which each should cut their emissions and who should bear the costs.

Why is the meeting called COP21?

Narendra Modi writes in the FT 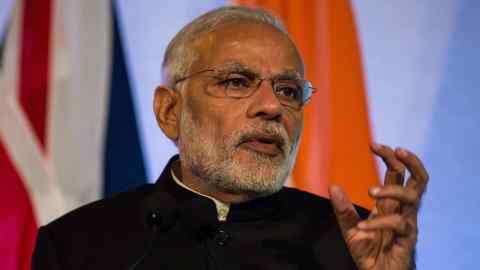 How do Kyoto and Copenhagen fit into all this?

The 1997 Kyoto protocol treaty was supposed to fill in a big hole in the Rio framework convention by setting out legally binding targets for countries to meet specific emissions targets. However, it only applied to wealthy countries that now account for a dwindling share of global emissions, and the US never ratified it, largely because it did not require China to cut its pollution.

To make up for Kyoto’s deficiencies, countries tried to come up with a more universal climate deal in Copenhagen in 2009, at COP15. But that effort ended in acrimonious failure so a new round of negotiations was launched in 2011, aimed at coming up with a new accord in Paris that will require action from all countries, rich and poor.

Is COP21 likely to succeed?

That depends on the definition of success. The Kyoto protocol showed it was impossible to force countries to cut emissions, so the new deal is based on voluntary action plans. More than 180 nations have tabled pledges since March.

What hope for the Paris climate talks?

How much progress is likely at this week’s global talks on combating climate change? Gideon Rachman discusses the prospects for agreement on reducing carbon emissions with Michael Stothard and Martin Sandbu.

However, the commitments are not sufficient to prevent global temperatures warming more than 2C from pre-industrial levels, a threshold agreed at previous COPs. With a 1C increase nearly reached, scientists say evidence of a changing climate is already widespread, from rising sea levels to melting ice caps.

The years 2011-15 were the warmest five-year period on record, the World Meteorological Organization reported last week.

UN officials say a Paris accord could still be effective because many countries want the national pledges to be reviewed every five years so they can be strengthened. But it is unclear if all nations will agree to this. If the final accord does not include such measures, it is hard to see how it can be called a success.

What are the main stumbling blocks to a deal?

The central bone of contention has long thwarted climate talks: the divide between wealthy countries that grew rich from burning fossil fuels after the industrial revolution and poor countries trying to emulate their prosperity.

A large coalition of developing countries in the talks says it is unfair to expect them to stop using cheap, abundant coal and other fossil fuels unless rich nations give them a lot of money and technology to help them build cleaner energy systems.

Protesters gather across the world to send a message to leaders

Rich countries agreed in 2010 to deliver $100bn a year by 2020 in so-called climate finance, from public and private sources, and the OECD recently reported that at least $62bn was provided in 2014. But India and other countries have questioned that figure and say the Paris accord must require wealthy countries to deliver more than $100bn a year after 2020.

Developed countries are balking at including a specific figure in the agreement, arguing that today’s governments cannot be responsible for setting budgets so far ahead. If they hold out, poorer countries may say they cannot sign up to a global deal requiring five-year review periods and other measures wanted by richer nations.

Is that the only sticking point?

No. A host of other disagreements revolve around issues such as the long-term goal of a new climate accord. Oil-rich nations such as Saudi Arabia would be happy to stick with the target of limiting warming to 2C. But other countries want to “operationalise” this aim by spelling out a goal to cut emissions sharply by 2050 and phase out fossil fuel pollution by the end of the century.

Scientists say the latter move is what needs to be done to stop irreversible and risky changes in the climate, and some companies say clear emissions targets would offer a better signal to guide investments. But because the UN accord must be agreed by consensus, it is far from clear if a long-term emissions goal beyond 2C will make it into a final agreement.