In 1851, a team from New York Yacht Club won a race around the Isle of Wight off the south coast of England. They beat 15 British boats to take the Hundred Guinea Cup, a silver trophy valued at £100. Subsequently named the America’s Cup after the victorious yacht, America, the contest has become the world’s best-known sailing race.

Today, teams compete for the same trophy, but with budgets of hundreds of millions of dollars. The contest attracts some of the world’s wealthiest individuals and owners of luxury brands, both as fans and sponsors.

The contest is fiendishly difficult: the rules are set not by a federation but by the previous winners, who determine everything from the location — anywhere in the world — to the race length. They also specify key boat design characteristics that challengers can then tweak. This fosters advances in technology, but at ever increasing cost.

Over the race’s history, tycoons from banker J Pierpont Morgan to technology billionaire Larry Ellison have thrown huge sums at teams. But as rising costs deter potential competitors, fears are growing the race might lose its appeal — and its potential value to sponsors. The number of challengers ready to take on holders New Zealand in the next race in 2021 has fallen to four, after two pulled out because of financial difficulties.

Only about a dozen backers have the means to win the America’s Cup, says Ben Ainslie, the British yachtsman and the most decorated Olympic sailor in history. He helped Ellison’s Oracle Team USA win in 2013 before his British-backed crew were beaten in the 2017 contest by Team New Zealand in Bermuda.

In March 2021, Sir Ben hopes to bring the trophy back to the UK for the first time in 170 years, backed by £110m from Sir Jim Ratcliffe, the founder of the Ineos chemicals group who topped The Sunday Times’ UK rich list in 2018.

Though exclusivity has long been a byword of the contest, the prospect of only five teams vying for the cup worries Sir Ben. For him, such a small field detracts from the atmosphere of the competition. “We should be looking at 10 teams — that would be ideal,” he says. “If you ask any of the team principals, they would agree this particular boat is too expensive.” He is referring to the AC75 design for the 2021 race that specifies a boat length of 75 feet, with two long foil arms that make the vessels appear to fly over the water. “For a new team looking to get involved, it is quite daunting,” says Sir Ben.

The Ineos team’s first race boat, unveiled in October, took 90,000 man-hours to design and engineer, and 50,000 to build. Portsmouth harbour on England’s south coast, where the team is based, had to be dredged to accommodate the foil arms. 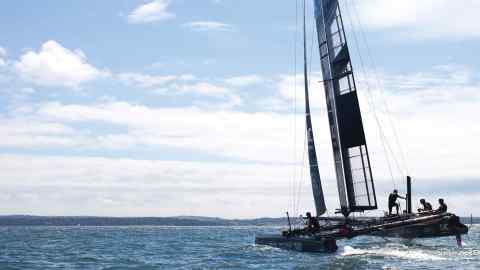 “It is a sport driven by technology, which makes it very expensive because you are looking for cutting-edge innovation . . . tens of thousands of pounds to find a millisecond’s worth of difference,” says Rob Wilson, a sports economist at Sheffield Hallam University in the UK. “You have a huge backroom of staff just to put one boat on the water.”

Sir Ben says, however, it is a “common misconception” that the biggest budget wins. That is borne out by the success of Team New Zealand, founded in 1993 and three-times winner of the cup. It is backed by commercial sponsors rather than a wealthy individual. Sir Ben says big budgets allow teams to try out “some crazy design ideas, because you can test so many different parameters”. However, “having a budget to stick to means you can focus on where you are going to get bang for your buck”.

Grant Dalton, the chief executive who has been with Team NZ since 2003, rejects the idea that boat design makes the cup expensive. “People will spend huge amounts no matter what cost control there is,” he says. Team NZ spent $50m on the 2017 cup, in contrast to the hundreds of millions other competitors were reported to have spent, he adds. For 2021, Team NZ’s budget will be about half that of Ineos and other rivals.

It is a sport driven by technology, which makes it very expensive

Dalton is blunt about how he keeps costs down: “It’s the payroll, not the boat.” Team NZ staff accept a lower salary than they would receive from a “mercenary team”, he says. “Sixty per cent of the cost of an America’s Cup team is the people.”

Teams do not disclose members’ pay, but in 2015 a case for unfair dismissal in a US court brought by Joe Spooner, a former sailor in Ellison’s Oracle team, revealed his salary to be $300,000 a year.

Dalton says sponsors are scarce because recent cup practice has been to sell broadcast rights to pay-to-view television, limiting audiences. “You can’t produce compelling viewership figures,” he says, referring to past UK deals with subscription broadcasters BT and Sky. Team NZ hopes 2021 will be different, following a free-to-air deal for the race.

On the face of it, the America’s Cup does not lack sponsors: they include fashion brand Louis Vuitton, aircraft-maker Airbus and airline Emirates. But the list of sponsors is not a long one, and wealthy individuals step in partly because few other businesses can justify marketing to such a niche, albeit wealthy, audience.

“The America’s Cup almost lives in this kind of exclusive enclave where you don’t have engagement with sports fans generally [or] with sponsors,” says Simon Chadwick, professor of sports enterprise at Salford Business School in the UK. “It is a self-serving elite.”

Cup financing has divided opinion in the host location. Phil Goff, mayor of Auckland, which is hosting the 2021 race, is supportive. He expects cup-related revenues of NZ$1bn ($650m) and 8,300 jobs, mostly in Auckland itself. But a NZ$250m infrastructure development, which includes overhauling a rundown waterfront, is being funded partly by NZ$140m of public money and has not been universally welcomed. “It is the sport of billionaires, for billionaires, and the ordinary people have to pay for it,” one city councillor has said.

Mike Buckley, chief executive of Stars + Stripes Team USA, a new entrant, wants to dispel the perception of the cup as a rich people’s game, and lower barriers to entry. “Our aim is to inspire people to take risks and follow their dreams,” he says. He aims for a “national team” ethos, with multiple sponsors.

That funding model creates more work, however. Sir Ben’s previous cup team had 10 sponsors. “Making sure all the stakeholders felt like they were getting a return on their investment did take some managing,” he admits. “This time, having one backer, the ability to focus purely on performance is much easier.”

On the water “it still comes back to the fundamentals”, says Sir Ben. “Reading the wind and trying to take the right course, that doesn’t really change that much whether you are sailing a laser dinghy or an America’s Cup boat.” Back on dry land, though, money will have a bigger say than ever.