Which is better — the Ombudsman or the small claims court? Since I posed this question in a column at the end of October, I have been deluged with correspondence from FT Money readers about their successful court claims, and praise for the “easy to use” online forms provided by the Ministry of Justice.

Many readers tell me they have abandoned ombudsman services after poor experiences. Instead, they get online and take their complaints to court.

Benjamyn Damazer, a management consultant from Lincolnshire, is one of the more extreme users of this system — with considerable success. He says: “Out of about 20 claims, I have won them all with one exception.”

When a hotel in Luton clamped his car by mistake, he had to pay about £250 in taxi fares to be on time for his appointments. The hotel refused to refund these, so Mr Damazer went to the small claims court.

He won the case — but the hotel did not pay. Mr Damazer decided to enforce the judgment using bailiffs. “They arrived at the hotel during an England football match,” he says. “The staff claimed they had no cash, so the bailiffs started to remove the widescreen television. Amazingly all the money for me, the court and the bailiffs was found and the bailiffs proudly rang me from the hotel to give me the news.” The money from the court service arrived (including all the costs) a few days later.

In the second quarter of this year, 21,000 cases were allocated to the small claims court. Financial disputes with builders and tradesmen were common. There were also many cases of retailers who had sold faulty goods and increasing numbers of disputes between private landlords and tenants. Claims for housing repairs or for personal injury are limited to £1,000, but for many claimants, the threat of court proceedings is enough to force landlords to take action. The majority of cases were settled or withdrawn before a court hearing, and many companies settle to avoid the expense of defending themselves.

The court’s emphasis is on trying to settle disputes without court proceedings. The ombudsman services can be a good way of testing the water — they can provide valuable information for taking the case to the legal system. 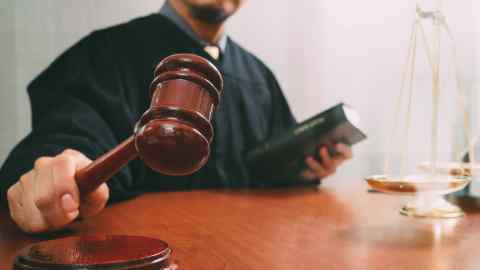 Using the small claims court is relatively inexpensive. For online claims, the cost starts at £25. For paper claims, the cost is £35 for claims up to £300. The initial fees rise in line with the claim size, and can be up to 5 per cent of a claim worth £100,000 to £200,000. A hearing fee of a similar size will also be charged if and when your case is heard.

Be aware that there is quite a bit of admin up front. You must set out in full the reason for the claim, and the sum you are seeking from the defendant. When you have completed the paperwork, the court will log the documents and assign you a claim number.

However, many FT readers reported instant success once they had filed a claim.

The defendant must respond within a reasonable time. This can be 14 days in a straightforward case and no more than three months in very complex ones. The average time it takes to resolve a small claims case is just under 34 weeks.

If you win your case, you will usually be able to claim back the cost of your fees. If the other side wins, you will have to bear your own costs and be aware that expenses could be awarded against you.

How companies deal with mistakes or accidents makes a big difference to customers. Mr Damazer — the reader with 20 successful claims under his belt — was travelling on an East Coast mainline train when it suddenly lurched as the steward was pouring his coffee. The drink ended up in his lap causing discomfort and staining his trousers. The company agreed to pay for the cleaning, but then did nothing — so Mr Damazer took them to the small claims court. “I reckon it cost them twice as much,” he says. “The trousers had been damaged and the stain would not come out, so they paid for a new pair.”

If you win your case, you will usually be able to claim back the cost of your fees. If the other side wins, you will have to bear your own costs and be aware that expenses could be awarded against you

Retailers often try to fob customers off, but a court action can concentrate their minds. Mr Damazer bought a pair of headphones from an Oxford Street store; they stopped working. The store told him he needed to return them to the manufacturer. This was incorrect advice as retailers are responsible for reimbursing customers for faulty goods or replacing them. He started to take a case through the court; within seven days he received a replacement pair, a full refund, plus £50 compensation.

As a frequent user, Mr Damazer is impressed by the quality of the county court website. “It is the easiest government website to use,” he says. “It is better than VAT or car tax. It suggests wording and just works.”

One FT reader who made particularly short work of her complaint was Claire Macdonald. Her neighbour built a huge basement under his London home, which caused damage to Ms Macdonald’s property.

“It caused surface cracks,” she says. “There was nothing structural but we sustained damage and we only asked for £3,000 to have the whole room redecorated.”

However, the neighbour refused the request, and told Ms Macdonald to get a solicitor and deal with it through the party wall agreement. “We found we may have to pay the costs of both sides’ surveyors and this could cost us as much as £15,000 and take lots of time,” she says.

Instead, she opted for the small claims court and emailed her neighbour with a copy of the claim with a quote from a builder to do the work. She received a cheque through her door for the full amount the following day.

“Another neighbour is using the party wall agreement system and is still arguing over recompense two years later,” she reports.

Ray Hatter, a former insurance broker, has taken several cases through the courts.

When he had difficulties with his stocks and shares Isa, Mr Hatter waited for a year for the Financial Ombudsman to make its judgment. It was not in his favour. He felt the ombudsman had ignored a statement from the Financial Conduct Authority in support of his case. He issued a summons. At the pre-hearing of the small claims court, the defendant capitulated. The judge asked that the two parties to sort it out with a maximum of 8 per cent interest on the loss being allowed.

When Mr Hatter’s online booking of flights failed, the travel company debited his credit card £720. It then told him the refund would take three weeks. During the following correspondence, Mr Hatter said he would charge £10 per day for interest and £12 for each letter he had to send. This was refused, but when he issued a summons he was paid in full and got about £215 as well as the amount debited from his card.

Mr Hatter said: “Before I take anything to court, I try to imagine what my opponent or their legal advisers would be saying. I have found the small claims court to be very user-friendly and far from intimidating.”

Before going to the trouble of making a claim, it is important to establish that the other party has sufficient assets. FT reader Philip Cresswell sued a garage and its subcontractor when the repairs to his car were poor. Unfortunately, the garage was in such poor financial health it was wound up immediately on receipt of Mr Cresswell’s summons. It did not contest the claim. The subcontractor involved filed a defence, which Mr Cresswell contested and no further evidence was offered.

“So I won by default, but the court bailiff claimed to be unable to identify useful assets to the claim,” he said. “At that stage I gave up, deciding to take it as a life lesson.”

Nevertheless, the examples from FT readers show that the process can often lead to rapid resolution. In most cases, a settlement will be reached before the small claims court hearing. Saying “I’ll see you in court” is simply a threat — but it has to be credible for a consumer to win their case.

Lindsay Cook is the co-author of “Money Fight Club: Saving Money One Punch at a Time”, published by Harriman House. If you have a problem for the Money Mentor to look into, email money.mentor@ft.com