Subsistence farmers in rain-scarce Kenya are looking to solar-powered irrigation systems to aid their thirsty crops.

Until now, in the country where 80 per cent of the land faces low and unpredictable rainfall, many farmers have chosen to eliminate rain-fed agriculture from their crop rotations.

Others irrigate their land by flooding it from a nearby river or lake, which can erode the soil and deplete its nutrients. Or they use an expensive and inefficient diesel-fuelled pump for drip irrigation.

But solar irrigation technology from SunCulture, a US company, now seeks to transform the fortunes of subsistence farmers in arid areas.

The company’s apparatus uses solar power to pull water by electric pump from the source into a raised tank. Gravity then pushes it through irrigation pipes to water crops with emitters regulating the flow to targeted areas.

Alice Migwi, a farmer from Limuru in central Kenya, has been a SunCulture customer since 2013. She says her solar irrigation system has increased yields, saved water and cut fuel and labour costs. “I needed a more efficient system to manage the watering of crops,” says Ms Migwi, who began by planting staples such as spinach and carrots but is now growing mulberries and capsicum, which generate greater returns. “It would take over an hour for the watering process, and now it is 15 minutes.”

By using the solar technology Ms Migwi says her annual revenues have grown 10 per cent over the past three years to 18m Kenyan shillings ($180,000). “My workers can now focus on the quality, by weeding, taking care of the produce, harvesting, rather than focusing on menial tasks such as watering,” she adds.

With a payback period of just one three-month-long growing season, the drip-irrigation system can boost crop yields by 300 per cent and will save up to 80 per cent of water use, according to the irrigation company.

SunCulture began after Mr Ibrahim was approached by Charles Nichols, his friend and co-founder, with the idea to provide renewable energy for east Africa’s farmers.

Most of Kenya’s farmland is unsuited to agriculture that depends on regular rainfall, with just 5.4m hectares capable of growing crops, says Mr Ibrahim. More than 80 per cent of this land needs irrigation to be productive, but only 4 per cent of Kenyan farmers irrigate. This limits the country’s ability to guarantee food supplies and also the earning power of many farmers.

SunCulture began after the pair entered a social venture competition at New York University and came second. Seeing the potential for the business, they raised around $200,000 in seed capital from friends and family and launched a pilot project in Kenya. Since arriving in Nairobi in October 2012, they have raised $4m from grant organisations and bodies such as US Aid. They are in the process securing more funds.

“We’ve had to create the support infrastructure from scratch. The ecosystem does not exist for us to piggyback off other industries,” says Mr Ibrahim, who adds it is important to consider farmers as customers, not recipients of aid. Technicians and agronomists certified by SunCulture provide farmers with on-site training, soil analysis and other support by mobile phone. Rapid delivery and installation across Kenya are included in the price of the system.

But SunCulture’s kits are not cheap. At almost $3,000 to cover a single acre, the cost is prohibitive for many farmers. “I had savings and that has helped me to buy the technology,” says Ms Migwi. “I worked in the corporate sector for 15 years. But for the average farmer it is still too expensive.” 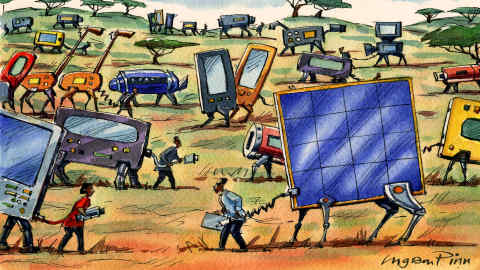 Mr Ibrahim says he hopes that the cost can be brought down. He concedes: “The biggest barrier for farmers is the upfront cost — not every farmer has the capital required to buy our goods. This keeps us up at night.”

SunCulture is working on technologies, such as its “mist” irrigation apparatus that are more affordable. It is also branching out into financing. In the next two months it plans to launch pay-as-you-go solar irrigation packages that cost as little as $2 per day. It also hopes it can branch out across the continent.

Crop yields achieved by Africa’s farmers trail world averages by as much as 50 per cent. But with fuller access to capital, technology and know-how to boost output, the World Bank estimates by 2030 farmers on the continent could create a $1tn agribusiness market.