Coveted by wealthy Chinese but produced by a corrupt industry, jadeite brings harm as well as income to Myanmar

Much of the jadeite which delighted the 19th-century Chinese Empress Dowager Cixi and still pleases her modern compatriots comes from Myanmar, whose “imperial jade” is the world’s most valuable and is highly sought-after for its near-transparent emerald-green hues. (Jadeite, which is rare, comes from Myanmar; what is thought of as Chinese jade is in fact the more common nephrite.)

But the grandeur of China’s Imperial Palace is a far cry from the mining towns in northern Myanmar. Here the ye ma say (hand-pickers) scratch a living in difficult conditions, searching for jadeite through waste dumped by mining companies on the blackened hills of the world’s largest jadeite mining region, Hpakant, in Kachin state. Whatever they find, they sell back to traders and miners.

According to a 2015 report on Myanmar’s jade trade from campaigning organisation Global Witness, most of the jadeite extracted from Hpakant is smuggled to China to avoid tariffs. Global Witness’ investigations into the value of jade mined in Myanmar have suggested that it may have been as high as $31bn in 2014 alone — half of the country’s GDP, or 46 times government spending on healthcare. At the annual jade emporium in 2014, a single boulder of it was given a reserve price of €60m, according to an unpublished report.

In June, in a case that gained international attention, a group of jade traders alleged that senior officials in previous governments had colluded with powerful business interests to appropriate $96m from a levy on the annual jade auction. The government launched a probe, which quickly found that the officials, including a former Navy commander and minister, acted within the law.

Juman Kubba, a senior campaigner with Global Witness, says the industry remains a “black box” and that “simply saying there is ‘no corruption’ is not good enough”.

Kyaw Kyaw Oo, chairman of the KIC Group, which operates jade businesses and was one of those complaining to the government, says the evidence is there if officials bother to look. “Here in front of me I have a lot of receipts detailing how the money was spent. If you check the details of how this money was spent you will see how it was misused,” he says. The Financial Times has seen translations of these receipts, which suggest politicians and industrialists took the fund’s money.

Very little of the revenue from jadeite has made its way into the local economy. According to the World Bank, the biggest producers are Chinese-owned front companies (foreign ownership is illegal) and the majority of buyers fly in from mainland China, Hong Kong and Taiwan. Until last year there were no customs duties on jade, and there are already methods for avoiding the 30 per cent levy on rough gemstone exports introduced last year. To avoid taxes, mines may register the stones, but at deflated prices, before selling the jade on to shell companies. A chaotic shadow economy, the jade business is permeated by corruption and ties to ethnic conflict and warlordism, Global Witness says. It estimates $6.2bn in mine site tax was lost in 2014.

“For years, a powerful elite has been gorging itself on Myanmar’s jade riches at the expense of the rest of the population,” says Ms Kubba. “Reckless exploitation has led to deadly landslides and ravaged the environment, while local people have been squeezed out of the mines and Kachin state remains riven by intractable armed conflict.” 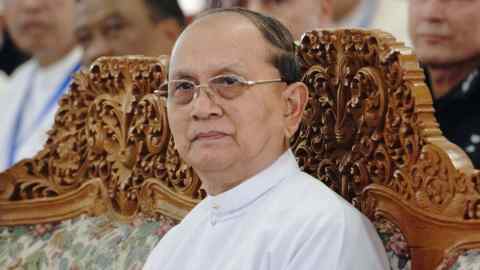 Rising affluence in China since the 1990s intensified the demand for jadeite, according to United Nations trade statistics, and encouraged Myanmar’s military junta to seize control of Hpakant’s lucrative jade fields from the Kachin Independence Army, a military group formerly seeking autonomy for the region. Military officers gained control of the most valuable deposits, distributing concessions to relatives and cronies, according to the Global Witness report.

As production ramped up, so too did corruption and the number of social and environmental disasters. More than 100 people died in one incident last year when a waste tip collapsed as scavengers searched for jade scraps, prompting the deputy minister for mining to propose operations there be shut down. Local civil society groups estimate that more than two-thirds of the scavengers are addicted to heroin, which is sold openly in mining areas.

Despite the transition to civilian-led government in 2011 after nearly 50 years of military rule, military officials and companies, such as the Union of Myanmar Economic Holdings, placed under sanction by the US in 2008, still control much of the trade and the mechanism for allocating permits, according to experts.

As a member of the Extractive Industries Transparency Initiative, Myanmar has agreed by January 2017 to devise a plan for revealing the beneficial ownership of jade companies and reforming mining legislation. The state regulator, the Myanmar Gems Enterprise, has announced that permits for more than 300 jade and gem blocks will expire this month and a moratorium on new permits was declared in July. 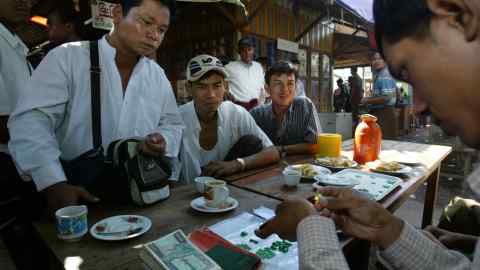 The MGE organises the gem emporium and acts as both regulator and operator-owner in joint ventures with private mining companies that span many of the most important jade tracts near Hpakant. Much to the dismay of transparency watchdogs, in September, President Barack Obama met with Myanmar State Counsellor Aung San Suu Kyi on her first official visit to the US and announced that all economic sanctions — including those affecting MGE — would be lifted.

Hla San, a Kachin state lawmaker with the governing National League for Democracy, who has campaigned for greater transparency in the sector, says even the most recent exposés have only scratched the surface. “You only get to hear about the details of corruption when [companies] squabble with each other and it goes public,” he says.

MGE’s connections (it has staff who used to be in the military) have afforded it influence and autonomy, says Matthieu Salomon of the Natural Resource Governance Institute non-governmental organisation. “MGE’s responsibilities remain hazy, in part because the enterprise has failed to make public key documents in its domain, such as the Myanmar Gemstone Rules, or any activity or annual report.” Representatives of the MGE did not respond to requests for comment.

Also of concern to transparency groups is the use of so-called “other accounts” by the MGE to amass revenues with no public scrutiny. Myanmar’s first EITI report showed the MGE retained over half of the official gemstone revenues — more than $200m — in these accounts, which Mr Salomon called a “modest estimate”. The real figure amassed in its accounts, he says, could be as high as $650m.

Mr Kyaw Kyaw of the KIC Group says that transparency measures have to be enforced while Chinese demand remains high. “There needs to be punishment for people who break the law. But without the army and police’s help, we cannot make this work. If they participate and support this action, then, perhaps, things will change.”

This article was updated to reflect that the figure in MGE’s accounts may be up to $650m, rather than is probably in excess of $650m, and that NRGI is an NGO, not a consultancy. It was also updated to show that $31bn is Global Witness’ estimate for the total value of jade mined in Myanmar, not the illicit trade.

Get alerts on Myanmar when a new story is published