European business schools have long welcomed student cohorts that are diverse and highly international. Yet with populist parties, nationalist leaders and inward-looking policies on the rise in many parts of the world — including Europe — seemingly hostile student-visa and work permit regimes can deter even the keenest potential candidates.

Geethu Mattam worked as an analyst with Goldman Sachs in Bangalore before applying for MBA programmes at business schools in the US, Canada and France. She made the “wait list” at NYU Stern, but says she did not pursue the admission process “because of multiple stories . . . of students returning to India without jobs, even though they graduated from top schools in the US”. She heard that “due to the policies adopted by the current administration, many companies were unwilling to sponsor visas for internationals, and with such high fees compared to that of Canada and Europe, the risk was too high for me”.

Mattam accepted an offer from Rotman School of Management in Toronto, but her study permit application was rejected twice. She was eventually accepted at HEC Paris and joined the September intake “without any hassle”. She received her French visa in less than 10 days and had no qualms about the welcome she would receive beyond the requirement of French fluency for most jobs there.

“The perception of being a welcoming country also plays a big role here,” he says. “The last election and the popularity of President Emmanuel Macron abroad are among the different aspects that can make a country attractive and open to the world.”

Research suggests business schools in the US are losing out to such perceptions. A recent survey by GMAC, the body that administers the GMAT business school entry exam, found that a growing number of Asia-Pacific candidates were opting to stay in their home country or region, while internationally minded candidates sent fewer applications to the US.

I heard multiple stories of students returning to India without jobs, even though they graduated from top US schools

In October, US business school deans wrote to President Donald Trump to ask that he consider removing “per-country” visa caps and reform the H-1B visa programme for graduate-level jobs, creating a “heartland” visa that encourages more immigration to US regions that need highly educated employees.

In contrast, most MBA programmes in Europe received more applications last year, with the percentage of international business school candidates who planned to apply to a European course increasing from 63 per cent in 2017 to 69 per cent in the first half of 2019. Almost two-thirds of candidates who chose Europe as their preferred destination said the improved chances of an international career were a factor.

Brexit seems to be having less impact than expected on candidates’ perceptions. Three-quarters of British MBA programmes reported that international applications either grew or held steady compared with last year.

Pascal Michels, MBA admissions director at Iese in Barcelona, says his school has seen a surge of applications from Latin America in the past three years. “It’s hard to rule out the influence of the US political climate,” he says. “On the other hand, it’s now a well-established fact that Brexit neither hurts our UK competitors, nor helps continental schools much in this market. Political and economic factors don’t necessarily work in lockstep. 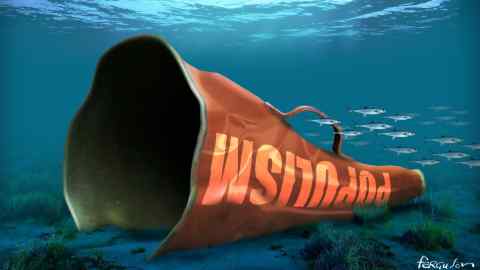 “Roughly speaking, I’d say that visa regimes are more permissive in Europe than in the US, which makes the region attractive for international candidates. On the other hand, language requirements can add to the complexity of shifting geography, depending on company size and sector.”

“Visas, work permits, and politics have always played a role in where candidates decide to study, and it would be naive to say a divided Europe, and many countries seemingly looking inward, haven’t changed perceptions and the way candidates view Europe.”

Students want to study in an environment where they feel welcomed and comfortable, Wright adds, or “they’ll consider where they want to be spending their valuable time and money”.