Sign up to myFT Daily Digest to be the first to know about Business school news.

Kevin Stevens, dean at Quinlan School of Business at Loyola University Chicago, has a vision of the type of student he wants to recruit that is far removed from the profit-maximising capitalist. “We are looking for people who want to marry profit with purpose and to be well versed in social impact,” he says.

His approach is reflected in programmes such as an urban social-benefit incubator organised by the school for students to learn from — and serve others — by offering consulting advice to local non-profit organisations.

“Demand is coming from all sides: we are hearing it from corporations and we are really hearing it from our students,” he says. “This generation is so concerned about what the future looks like and what shape the planet will be in that they are demanding we focus on it.”

This trend is driving business schools to recalibrate their programmes. Many are supplementing more traditional classes with ones focused on environmental, social and governance, or ESG, topics.

Ann Harrison, dean at Haas School of Business at Berkeley, agrees. “I think there has been a really profound shift in teaching at business schools, from learning how to be rich to going out to make the world a better place,” she says. “Students who [previously] might have studied public policy want to come to us to make a difference through business.”

Since 2007, students at Haas can help manage a $3m sustainable investment fund, and the school is “walking the talk” in its own operations with a new eco-friendly building and plans to send no waste to landfill by 2020.

The challenge is how to evaluate such initiatives to help students, employers and the schools themselves to identify the best and to encourage further progress without consistent or agreed standards for how to measure societal impact.

Researchers at HEC in Paris have flagged the same problem in fund management: different rating agencies assess compliance of investors with ESG criteria in overlapping and even contradictory ways.

As a result, the Financial Times asked business schools to submit what they considered to be their most noteworthy initiatives in four categories: research, teaching, student projects and their own operations. These were then shared with a panel of judges drawn from UN agencies, non-profit groups, investment funds and companies, as well as leading educational accreditation agencies and student groups.

The first notable trend was how much is going on. More than 220 business schools submitted examples of ways in which they were delivering societal impact. “I was stunned,” says one of the judges, Delphine Queniart, deputy head of global sustainable finance at BNP Paribas, which is seeking graduates with such skills. “I didn’t realise so many universities were already putting so much thought into very interesting and well-designed courses. That’s very positive and made it very difficult to choose.”

A second aspect was the variety of definitions used and the difficulty of assessing their effect. Schools submitted examples that ranged from reducing their carbon footprint to tackling homelessness and low wages. Despite being asked to explain how schools ascertained that their initiatives made a difference, the data offered were often limited.

The judges too, had differing perspectives on how to assess the submissions. As quantifiable and objective criteria for what constitutes societal impact have yet to be agreed, the judges preferred to identify 20 strong examples in each category that reflected a range of best practices, rather than seek to isolate a clear “winner”.

Some patterns did emerge. Schools with strong religious frameworks appear in the four categories. Quinlan School of Business at Loyola University in Chicago, which was cited in three different categories and Fordham University in New York — are Jesuit institutions. Two others — Dublin City University and Mendoza College of Business at the University of Notre-Dame in Indiana — are also rooted in Catholic traditions.

Judges picked three HEC Paris initiatives, three from Insead, and one each from ESCP, Grenoble Ecole de Management and Burgundy School of Business.

Examples of teaching that had societal impact were notably hard for judges to assess. Many institutions offer courses in impact investing, sustainable finance and supply chain management; most provided ways for students to work with non-profits. But only a few ensured such courses were obligatory.

Several entries profiled initiatives focused on partnership, capacity-building and resources that could be used by others. Macquarie University has developed an affordable online course on corporate social responsibility. Cranfield School of Management has pioneered a free downloadable board game on sustainability. Hult International Business School hosts a $1m award for the best social enterprise idea proposed by student teams worldwide.

Submissions for the research category included examples from prestigious schools such as NYU and Stanford University. Harvard and Oxford universities proposed new accounting systems that focus on more than narrowly defined financial returns.

Many schools however failed to draw a clear connection between peer-reviewed publications on relevant topics and implementation of the ideas they proposed. But Duke University was able to point to a proposed a gallons-per-mile fuel standard that is now federally mandated. It had also identified that black colleges paid more to float bonds, which has sparked proposals for legislative reform.

The Financial Times showcase revealed considerable ESG-focused activity by many business schools, but it also showed the need for more consistent definitions and ways to measure impact. As Colin Mayer, professor of management studies at Oxford’s Saïd Business School, says: “Business schools should be at the vanguard not the rearguard in driving forward purpose and responsibility of business in their research, teaching and education. But things are changing.” 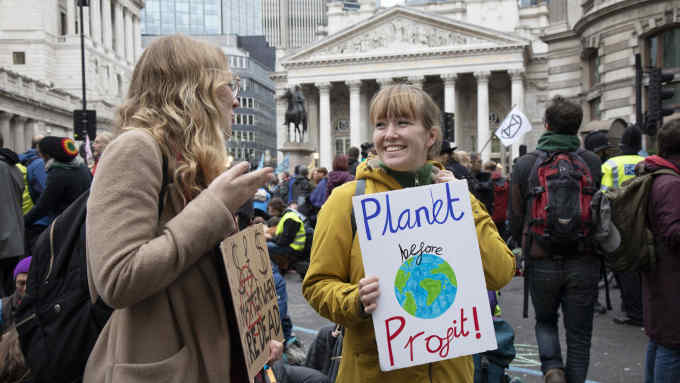