Table football, comfy sofas, book shelves and exposed brick walls suggest a contemporary café rather than an insurance office or bank branch. But such trendy spaces are increasingly part of the financial sector’s push to foster financial technology or fintech projects.

So-called digital garages or labs provide a less corporate environment for the technology experts that banks, insurers and asset managers have hired to help them devise slick new mobile services.

Customers increasingly expect to manage their finances on the go, from sending international payments using a phone number to applying for a mortgage via video link. Established financial services companies are investing in these technologies in an attempt to attract customers, cut costs and buoy profits.

However, they are coming under increasing pressure from a plethora of more nimble start-ups. Digitally focused fintech companies have attracted billions of dollars of investment. Figures from advisory company KPMG show global investment in fintech companies totalled $9.4bn in the second quarter.

Startups have the advantage of being free of legacy technology systems and tough regulation, both of which limit the digital developments of established financial services firms.

As a result, start-up companies can more efficiently create mobile-focused services or products that threaten existing financial companies. For example, a number of mobile-based banks such as Atom, Tandem, Starling and Monzo have emerged in the past year with the aim of offering current accounts that help customers to manage their money and lifestyle.

Some fintech start-ups pose a direct threat by capitalising on weaknesses and gaps left by established companies. Nutmeg in the UK, for example, provides low-cost online wealth management, which makes investment expertise accessible to millions of people who cannot afford advice but do not have the confidence to go it alone.

Enter your fintech project in the FT Future of Fintech Awards 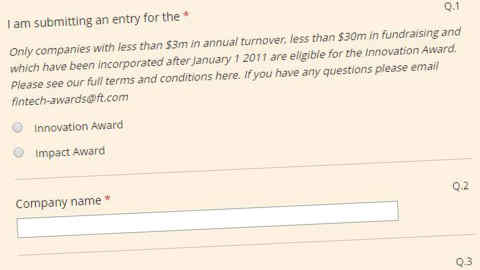 “Without the inefficiencies attached to the banking sector, such as high costs from branch networks and legacy IT issues, platforms are able to deliver the same level of credit assessment at a fraction of the time and cost.”

Tim Levene, founder of Augmentum Capital, a fund backed by Rothschild, said these “true disruptive” players will often take time to become big enough to be profitable and require meaningful capital, but are not hampered by “the bureaucracy and sluggishness of an existing goliath”.

Some established companies have drawn inspiration and are creating their own fintech projects. Clydesdale and Yorkshire Bank, for example, recently launched a mobile banking app called ‘B’. Similar to the new mobile banks, B aims to help customers manage their money, for example by sending prompts when customers fall into an overdraft. Other traditional companies have dedicated funds that invest in external fintech firms. This gives start-ups funding and the cachet of being associated with an established brand, while having the freedom to generate ideas and designs independently.

Simon Toms, a partner at law firm Allen & Overy, said: “Banks and insurers are now organising themselves in a more structured fashion, creating standalone investment arms that look specifically to invest in new companies to grow in their sector.”

Sometimes the older firms form partnerships with these new companies, or at least appropriate their technology. Santander UK recently teamed up with Kabbage, a US company in which it invests, to allow it to provide small businesses with funding in a matter of hours.

“Collaborating with fintech companies is an important and mutually beneficial relationship. We have the regulatory expertise in the sector, as well as the infrastructure and scale.

“Meanwhile, fintechs have the agility and are able to move quickly, thinking out of the box, developing and launching new products and services at pace.”

For financial services companies, often weighed down by old IT systems, partnerships with fintech firms can be a more efficient way of plugging gaps in their business models.

Financial & markets regulation
UK regulators are the most fintech friendly Royal Bank of Scotland, for example, has joined forces with a number of online lenders to small business, including Iwoca. Christoph Rieche, co-founder of Iwoca, which has customers across Europe, said: “Banks certainly see us as more of a friend than a foe because we are providing a service to customers that they are currently not able to deliver themselves. The record and experience we’ve built up make us an interesting partner.”

Although many fintech companies might offer superior services, they often lack the scale, brand and customer distribution channels to compete against the incumbents in the long term.

Banks, asset managers and insurers could ultimately move to acquire fintech companies once they have become more established, as a low-cost way of delivering cutting-edge services.

Warren Mead, global co-head of fintech at KPMG, said: “Getting access to customers is very hard and expensive, so more fintech companies are turning to banks to have partnerships. I don’t see them dominating the space in banking; I think they’ll end up being acquired. One or two could merge.”

Mr Levene of Augmentum said: “It is inevitable that today’s major financial services players will become a significant acquirer of fintech businesses over the next three-five years.”

Some incumbents have already taken large stakes in a number of fintech firms. Spanish Bank BBVA, for example, acquired a 30 per cent stake in Atom Bank last year.