Jonathan Anderson makes the combination of craft and concept his own

After his Spring/Summer 2020 womenswear show for Loewe, designer Jonathan Anderson said, “I was thinking about how you do your best work in the morning. It’s about clarity, and when your ideas are the strongest.”

Unveiled in the Maison de l’Unesco, Anderson’s arresting collection imbued airiness with a razor-sharp polish, complemented by a pristine arrangement of potted pampas grasses and amethyst geodes. “We had to rely on precision,” Anderson said. “But in that, it became poetic.” There were christening-style dresses with pale blue pointed collars, floating cover-ups, and 17th century-glancing panniers. Chantilly and marguerite lace featured prominently, as did fringing (some of it in crystal strands), and neo-retro bell bottom trousers made of voile. Capes became outsized poncho coats; one in desert beige had gargantuan sleeves that fell to the ankle. Wooden beads and pearls tumbled from bare shoulders. There was also a series of diaphanous, graceful bridal dresses — stripped of ceremonial formality but no less appropriate because of it.

Anderson was at his brightest with the more ethereal pieces. One all but transparent smock dress — the colour of an overcast, pre-burn-off dawn — had circular cut insets. He combined romanticism, rigour, and a handmade finesse that marked a softer direction — and may well appeal to a wider audience looking for more sportswear-style pieces as opposed to anything too artsy (where Anderson has ventured before).

The designer also introduced a new version of Loewe’s Balloon bag; a drawstring bucket style that came in three formats, made of leather, crochet raffia or canvas. Since Anderson took the helm of Loewe in 2013, he has generated hit bag after hit bag, from the leather Puzzle to this summer’s sold out raffia basket. In 2018, the success of Loewe’s accessories and leather goods contributed to a 21% spike in profits for LVMH’s fashion and leather goods category overall. (The house’s gift items, released for the holiday season, also provided a boost.) These latest additions will appeal to those that gravitate towards the label’s subtle leather accessories.

Anderson, at both his eponymous JW Anderson label and at Loewe, has hit an impressive stride in recent seasons. By investing intellectually in the artisanal as a backbone for the latter, he has forged a compelling identity. Loewe is very wearable, yet it looks little like anything else. 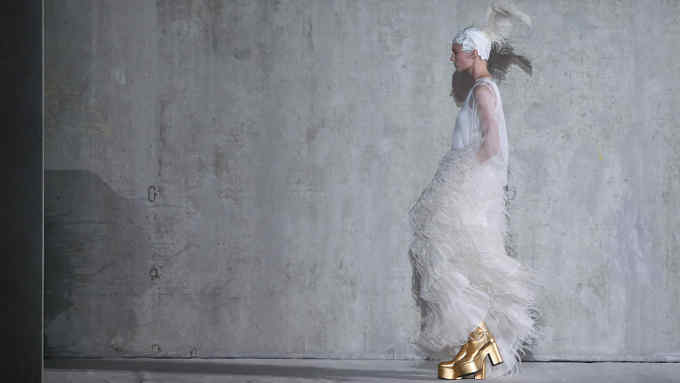