We’ll send you a myFT Daily Digest email rounding up the latest Music news every morning.

Paul Atkin is no Fitzcarraldo. But, like the wild-eyed Irish rubber baron of Werner Herzog’s film, the mild-mannered accountant turned entrepreneur wants to build an opera house in difficult circumstances.

With Fitzcarraldo it was deep in the Amazon basin. With Atkin it is in Venice, a city with a vast range of cultural offerings, including three existing opera houses. But the 56-year-old Briton, who made his money in tax services, is convinced Venice has room for one more.

His dream is to rebuild the Teatro San Cassiano, the world’s first public opera, which opened its doors in 1637 in the Baroque age, the time of Claudio Monteverdi, who is widely seen as the first operatic composer.

“I definitely believe in this project from the bottom of my heart,” Atkin says. “We are talking of somewhere that in its day was the most exciting place on the planet.”

He faces formidable challenges. There is almost nothing left of the original building, which was destroyed in 1812 by Napoleon’s conquering soldiers. All that remains is a decorative stone mask that adorns a fountain in a private garden where the Cassiano once stood.

Atkin does not have control of the site, which is owned by a Venetian noble family. Nor does he have building permits from the city authorities — though they are sympathetic to his project. Nor does he have the £50m-£100m he calculates he needs to finance the scheme.

But none of this puts him off. In an interview in a London café, he brushes aside any hint of a comparison with Fitzcarraldo. Unlike Herzog’s flamboyant hero, he is not rushing into things without thinking. His plans have taken years to gestate — he has put together a 52-page investment presentation, and he knows he still has a long way to go.

Atkin lays out in careful detail how he can bring the San Cassiano back to life, and do it solely with funds from investors, without relying on public grants or charitable donations. His inspiration is Shakespeare’s Globe in London, the 1997 reconstruction of the late 16th-century theatre that staged the plays of William Shakespeare. It has been a commercial and artistic success, without public subsidies, and has helped transform the formerly rundown Bankside area by the Thames. “I can do for opera and Venice what the Globe has done for Shakespeare and the south bank,” he says. 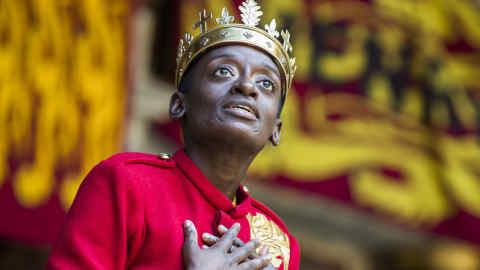 He comes to the project with plenty of experience of overcoming difficulties. Born into what he says was “a poor family” in the cathedral city of Ely, eastern England, he left school at 15 to work in the local council’s payroll department. Determined to make more of himself, he moved to London at the age of 18 and continued working in accountancy while developing a longstanding interest in music as a drummer in a rock band.

Within a couple of years, he established his own accountancy business, Paul Atkin & Co. But the firm ran into trouble in the financial turmoil of the late 1980s and collapsed in 1991, leaving Atkin bankrupt. “I did things wrong and I lost everything,” he says. “But without that [failure] I would not be here today.”

The setback was a chance to take stock. He decided to pursue his musical passion with an undergraduate degree at Leeds College of Music. Once there, he soon realised he would never “be good enough to be a professional musician”.

He focused instead on musicology and learning Italian, and discovered his love of opera, writing a paper on the Romantic composer Puccini. Even though he was still working as an accountant to cover his bills, his commitment to music was now so strong that he decided to do a PhD in his spare time. He wanted to study Venetian opera but was told it had been “done to death”, so he focused instead on another historic Italian city, Modena.

In his research he came across the San Cassiano Theatre. And in 1999, he recalls, he conceived the idea of rebuilding it. “That was the moment,” he says. But to realise his ambitions, he felt he had to finish his doctorate to acquire the necessary academic knowledge. He also had to earn more money — a lot more.

Back in London, he established a new accountancy firm, Brian Alfred, specialising in securing tax rebates for self-employed workers, mainly in construction. Even though he was still working on his PhD — finally completing it in 2010 — and bringing up two children, Atkin turned his new business into a UK market leader, employing 35 staff. When he sold it in 2014, he netted a “seven-figure sum” and was finally free to concentrate on the San Cassiano.

Atkin’s project has the support of three prominent figures — musicology professor Stefano Patuzzi, Andrea Marcon, a conductor and authority on Baroque opera, and Riccardo Viscardi, a financier from a well-connected Venetian family.

Theatre
Why does London need so many new theatres? The plans were boosted by a lucky find in the Venetian archives. Although there were no original 17th-century drawings of the San Cassiano, there was a detailed 1763 study produced when the theatre was planning an extension. The drawings include tantalising sketches which helped experts work back to an approximation of the 1637 building. With the help of other historical records, the Cassiano team was able to work out the structure of the original theatre, says Atkin.

He says he has won the backing of the Venice authorities, which have wide-ranging powers over the ancient city’s development. The proposed site has yet to be fixed. As well as the original location, three others with potentially better access routes are under discussion.

Atkin insists he will not compete with the city’s other opera houses, including the famous La Fenice, reconstructed between 2001 and 2003 after a disastrous fire in 1996. The San Cassiano will focus exclusively on opera from the Baroque period, whereas the other theatres rarely, if ever, present Baroque opera and concentrate on more modern works and other kinds of music and theatre.

Atkin says the San Cassiano will be unique because there is no other active 17th-century Baroque opera anywhere in the world with Baroque-style stage machinery for special effects such as gods descending from the rafters. There are just three surviving active 18th-century Baroque opera houses — two in Sweden and one in the Czech Republic — but all were originally court theatres and were not open to the public like the San Cassiano. “This leaves a void,” says Atkin. “But also creates an opportunity.”

Moreover, with a planned 405 seats, the San Cassiano will be small, allowing audiences to engage closely with the performers. It will be unashamedly upmarket, aimed at drawing well-heeled opera lovers to Venice. Atkin says this could help the city diversify away from the mass tourism that “everybody hates” and that threatens to overwhelm it.

So far Atkin is the only financial backer, having committed about £2m, including working unpaid for four years. But he is talking to other potential investors. “I think we can make money, but that is not the aim,” he says. “The aim is to re-establish Venice as the leading centre of the Baroque music industry.”

While it may be tempting fate, Atkin has an opera in mind for the first night — Monteverdi’s The Coronation of Poppea, about the passionate liaison between the Roman emperor Nero and his mistress Poppea. “Monteverdi is wonderful: he was the first to make opera sexy,” says Atkin.

Get alerts on Music when a new story is published