She’s coming home, to misquote the hackneyed football mantra. After 10 years in business, and a show schedule that has always favoured the other side of the Atlantic, Victoria Beckham arrived in London on Sunday morning with a newly charged vigour and a more focused business outlook.

It’s no secret that the brand has had its share of financial woes. Various reports this year have highlighted Beckham’s struggle to break even, with some suggesting the brand is losing £4000 a day. But she is working hard to remedy this. Last year, she received a £30m investment in return for a minority stake in the business.

The sale, to Neo Investment Partners, which is led by former Goldman Sachs banker David Belhassen, has driven a new push for growth. Paolo Riva, formerly of Diane von Furstenberg, started as her chief executive two weeks ago. She has a new Hammersmith headquarters. And the coming months will see further expansion. In particular, a beauty line is in the works, no doubt inspired by her successful range with Elizabeth Arden.

In a renewed bid to engage with her clients, Beckham had invited many of them to this London show. “I want to connect with my client, and get to know them,” said Beckham, who has always been her very best saleswoman. The show, which was split into two sittings with 150 seats at each, was an intimate affair staged next door to her store. Very convenient.

And more power to her. While the media delights in scrutinising her woes, I never fail to wonder at Victoria Beckham’s drive. She gets flak from all corners, but still she survives. I love her tenacity, and her will to dig in. The show was a celebration of all that she is — family, unity, femininity, bravura — and rightly so.

She’s come a long way since showing a dozen stretchy dresses in a New York hotel back in 2008. This collection, a mix of masculine and feminine shapes, drapey knit dresses, skinny and slouchy trousers and patchwork lace, was competent, clever and commercial. The palette — inspired by the contemporary British painter Nicola Tyson — was a pleasing combination of poppy-red, terracotta, baby blue and white. If she’s feeling confident about the future, it shows.

It was also mature in other ways. Her catwalk, which has been criticised in the past for looking too girlish, was full of more sophisticated faces. Stella Tennant led the finale in a white power suit. Malgosia Bela wore floaty floral separates. Liya Kebede walked in terrific tailored trousers, taffeta trench and a lingerie lace top. The cuts were elegant and flattering. There were heels, but lots of shoes were sensible and flat. These were clothes for real women, worn by women. And it worked.

Will she stay in London? It depends. Riva is keen to drive the brand forward, which may mean a move to Paris in the months ahead. For my penny’s worth, better stay in London. As the star of the Sunday schedule — it’s a capital gain.

Click here to read all Jo Ellison’s SS19 show reviews, including Ralph Lauren’s star-studded anniversary and the return of Escada 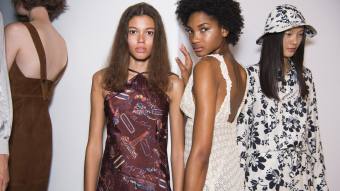