The dividend of expanding world production is not being evenly shared

Famine, wherever it occurs, is capable of rousing raw emotion, headlines of tragedy and the heated attention of politicians and campaigners across the world.

Natural disasters such as drought and human conflict still create food shortages that can affect millions and cause widespread death and malnutrition that, while not immediately fatal, can cause lifetime health damage.

The good news is that, despite the explosive world population growth of recent decades — and the stress this has placed on expanding food supplies — the prices of many foodstuffs have continued to decline, supporting the nutrition of billions across the globe.

The not-so-good news is that the dividend from this increase in the world’s food production base is not being evenly shared.

In most countries, the amount of money spent by people as a proportion of their overall income has declined in recent decades, allowing their populations to spend more on other essentials and the comforts of life.

Yet, in many lower-income countries, the proportion of income taken up by food purchases still exceeds 50 per cent, squeezing poorer people’s spending power and leaving them vulnerable to periodic price spikes in some basic commodities.

A report published by the UN’s Food and Agriculture Organization in September warned that, after a sustained period of advances in attempts to tackle hunger and famine across the world, this progress had been thrown into reverse in some areas.

“Evidence continues to signal a rise in world hunger,” the report stated. It calculated the number of people suffering from hunger had been growing over the previous three years and returned to levels from a decade ago. It estimated that number of people affected by undernourishment had increased from about 804m in 2016 to nearly 821m in 2017.

“The situation is worsening in South America and most regions of Africa; likewise, the decreasing trend in undernourishment that characterized Asia until recently seems to be slowing down significantly,” the report added.

The pattern varies between countries. In Uganda, for example, the share of income spent on buying food fell from close to 70 per cent in the 1980s to below 45 per cent within three decades to 2010. The percentage falls in India and Bangladesh — two of the world’s most populous countries — were smaller.

In the US, spending on food fell from about 18 per cent to 15 per cent cent in the three decades to 2010, leaving plenty in Americans’ pockets to spend on other needs and wants.

By 2014, Americans were spending just 5 per cent of their income on food consumed at home — with nearly as much spent outside the house at restaurants and other food outlets, according to analysis of data provided by the United States Department of Agriculture. by Our World in Data (a website resource supported by researchers at the University of Oxford).

Spending per head by its great economic rival China — a country subject to widespread famine in living memory — fell from above 50 per cent to 40 per cent in the same period.

This disparity on spending on food across the world continues.

In richer countries, food spending has become a small part of the weekly household spend — perhaps dimishing for all but the poorest concerns over food cost and security of supply. Disparities caused by wide variations in income can still threaten the food supplies of the poorest people in richer countries — as witnessed by controversy surrounding the expansion of food bank schemes in countries such as the UK.

Although the long-term trajectory of prices of many foodstuffs has been generally down — or at least stable — for many decades, data also shows large and potentially very disruptive peaks and troughs. These indicate sharp spikes in market prices that threaten the affordability of various commodities or, conversely, gluts and collapses in price that threaten the incomes and potentially livelihoods of producers.

Beef and lamb have risen in cost in real terms over the past century and a half although, for many, rising incomes have made these former luxuries more affordable. The prices of some cheaper sources of meat protein like pork have declined.

Prices of key staples such as wheat and rice — core sources of carbohydrate for many of the world’s poorest populations — have fallen. Worryingly for some nutritionists concerned about growing obesity levels across both rich and poor societies, sugar has become an even more affordable dietary component in recent decades.

A recent report published by Our World in Data, authored by Max Roser and Hannah Ritchie, notes the impact of Engel’s Law. This is an observation by the 19th century German statistician and economist Ernst Engel that “the poorer a family, the greater the proportion of its total expenditure that must be devoted to the provision of food”.

For many in the world, this law has applied in an increasingly benign way since the law was posited, as greater world food supplies and lower prices lift standards of living.

But for some parts of the world, Engel’s Law continues to exert a more burdensome influence over many people’s lives, according to the report. 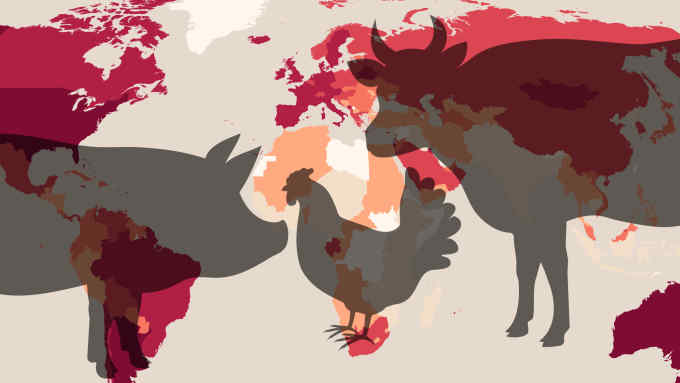