Shrinking subsidies mean some institutions are courting private investors, raising fears about the implications for teaching and research

France is a powerhouse of business education, accounting for nearly a quarter of institutions in the 2019 European Business Schools ranking. But many of these establishments, including the elite grandes écoles, are in need of new funds.

There is a long history of France’s local chambers of commerce and industry (CCIs) creating and funding institutions to serve business in their regions. But the financial landscape is shifting: successive cuts in funding by the French government to the CCIs mean their generous subsidies to business schools are falling away. There have also been cuts to the taxe d’apprentissage, or apprenticeship tax, received by schools, and they face increased competition.

In response, some schools have sold stakes to private investors, or are considering doing so, while others weigh up alternatives. This has raised concerns about the implications for teaching and research — whether private investment poses a threat to standards and, if so, how can they be protected?

Some in the industry say privatisation itself is not necessarily the problem — some schools are already private, such as Paris-based Essec — but rather whether they are run as for-profit or non-profit organisations.

Essec’s dean, Vincenzo Esposito Vinzi, believes a for-profit approach could be dangerous for teaching and research. “Once a school transforms into a for-profit organisation, investors will want a return, whether in the short or long term,” he says.

This could change the ethos of the school, Prof Vinzi fears, risking a loss of interest in developing various assets, including research. “If the approach of private investors is to scrap costly activities, the research might be seen as a costly service and not an investment in the brand,” he says.

Essec is a non-profit institution that is exploring ways to raise extra resources. The Paris Île-de-France CCI, which funds Essec, ESCP Europe and HEC with €10m each annually, last year announced plans that could result in the elimination of this financial support over the next three years. The Paris CCI also intends to create a shareholding company to manage its stakes in these institutions.

Prof Vinzi says that while there is a need for public and private investment partners for specific capital projects, Essec must remain a non-profit organisation. Such schools have a vital role to play at a time of transition, he says. “For them, education isn’t a product from which to turn a profit, but a mission to serve the common good by training responsible and inclusive leaders,” Prof Vinzi says. He adds that they must therefore invest in many areas, including research, campuses and their international networks.

Jean-Pierre Choulet, director of development and alumni at Henley Business School in the UK, spent 20 years in senior roles at Essec. He agrees that a shift to for-profit “is very, very dangerous”. “Education is for education,” he says, adding that a non-profit approach would ensure a significant part of a faculty’s time is invested in producing cutting-edge knowledge.

For schools, education a . . . is mission to serve the common good by training responsible and inclusive leaders

Others are in no doubt that investors are needed but also stress that a careful balance must be struck to protect teaching and research. “I am contemplating an investment of €150m [for a campus in Paris]. It is not going to come from the cash flow of the school,” says Frank Bournois, dean of Paris-based ESCP Europe, which is exploring equity sales to investors.

But “investors would not have total control”, he adds. Prof Bournois says that for those institutions that are not already private, the ideal approach could be to avoid full privatisation, keeping a majority of public stakes but supplemented by investors, from private equity funds to foundations and alumni.

Some schools — including ESCP — also have a special status called Etablissement d’Enseignement Supérieur Consulaire, which means a school can have both public and private investors but the paying of dividends is forbidden.

A balanced mix of shareholders is a strength, says Tawhid Chtioui, dean of EMLyon. In August, the school sold stakes of 14 per cent each to the state-linked private equity fund Qualium Investissement and investment bank BpiFrance Investissement for a total of €40m, diluting the regional CCI’s control. EMLyon plans to offer further stakes to both investors, as well as staff and alumni, to raise €100m, reducing the chamber’s stake over five years to 48 per cent.

Prof Chtioui says EMLyon was clear with investors that business education is not “a classic industry” and is not linked to short-term financial performance. The school defined a long-term strategy that it put to investors, who decided to accept its objectives.

“The value of EMLyon is not just financial, but it is a value in terms of reputation, in terms of quality, in terms of excellence,” Prof Chtioui adds. 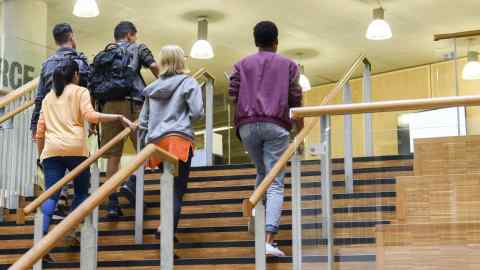 One golden rule is to ensure the school retains its triple accreditation. EMLyon has European, US and UK validation from, respectively, the Equis, Association to Advance Collegiate Schools of Business and Association of MBAs accreditation bodies. Retaining this recognises the need to invest in research and the learning experience.

Some schools have managed to thrive without private investment and with little public subsidy, finding other ways to raise money that could also enhance teaching and research. This is a challenge but not impossible, says Emmanuel Métais, dean of Edhec, a private but non-profit institution with campuses in Lille, Nice and Paris. The school receives little subsidy so has had to be innovative.

Edhec has monetised its finance research with a financial index business, selling its indices to investors around the world. Research is expensive and was previously funded by student fees, Prof Métais says — a model the school felt “was not sustainable in the long term”. Today, the dean notes, revenue from the spin-off makes up 15 per cent of the school’s €120m budget.