When EU rules were introduced to make it easier to sell mutual funds to retail investors across Europe’s borders in the 1980s, it was not the financial centres of London, Paris and Frankfurt that embraced the changes.

Instead, Luxembourg acted swiftly to adopt the rules into national law. The move helped transform the country’s economic fortunes, aiding its transition from relying on steelmaking to becoming one of Europe’s big financial centres.

The grand duchy ranks as the world’s second-largest domicile of funds, behind the US. Almost €4tn of assets are domiciled in the country, according to Alfi, the local investment trade body.

But there is doubt over whether the rapid growth of Luxembourg’s asset management industry can continue. The country faces greater competition from Asian nations, which are rushing to introduce their own cross-border fund regulations that are similar to the EU framework that has driven Luxembourg’s rise.

We can’t rest on our laurels. Competition is tough. We have to listen to the market and the changes that are happening in products and business needs

The UK’s Brexit vote has also led to questions around how Luxembourg’s fund industry will develop and about whether the country can broaden its position as a leading fund servicing centre to attract a wider range of business from financial institutions.

Charles Muller, an investment management partner at KPMG in the grand duchy, says the UK’s planned departure from the EU could herald a wave of protectionism across Europe with the potential to threaten Luxembourg’s fund industry.

“Our biggest issue [in Luxembourg] is that Europe needs to stay an open economy and that certain countries do not try to use the Brexit debate to become more protectionist,” he says.

Defending the health of the country’s asset management industry is a central aim for Luxembourg’s leaders. The sector accounts for 8 per cent of the country’s gross domestic product and 14,000 to 15,000 jobs, according to Alfi.

Few of those working in Luxembourg’s asset management industry, however, are involved in making investment decisions or even selling funds. Instead the country is best known for fund servicing and administration.

Investment decisions are typically made by portfolio managers in cities such as London, Paris, New York or Singapore. The fear now is that Brexit could lead to rival EU countries pushing back against this cross-border outsourcing model, by demanding that asset managers have more staff on the ground where their funds are regulated. Last month, Europe’s financial watchdog warned that delegation — allowing funds based in one country to be managed from another — would be allowed only under strict conditions, to avoid “letterbox” relocations aimed at securing EU access via lighter-touch jurisdictions.

Others are more confident the country will gain from the Brexit vote. Since last year, Alfi has argued the country could win more business from British asset managers that want to continue servicing European clients once the UK leaves the EU. Some UK asset managers such as M&G have already moved to increase their presence in Luxembourg following the vote last June. Michael Ferguson, Alfi vice-president for international affairs, says he is working with 10 UK asset managers that are setting up operations or applying for regulatory permission in the country.

But Sean Tuffy, head of regulatory intelligence at Brown Brothers Harriman, the US bank, argues the benefits of securing such relocations is limited. “Even with Brexit, Luxembourg faces an uphill battle to develop an asset management industry [rather than fund servicing industry],” he says.

Aside from the impact of Brexit, the country’s fund industry is paying close attention to plans for new Asian fund passports — which would allow products that are regulated in one Asian country to be easily sold in another.

Camille Thommes, director-general at Alfi, says the trade body is keeping a close eye on the competition. “We can’t rest on our laurels. Competition is tough. We have to listen to the market and the changes that are happening in products and business needs.”

Mr Tuffy says: “In the short term, there is probably no immediate pressure on Lux funds [from Asian fund passports] or, at least, no more than has there has always been. However, over a longer time horizon, it’s possible that some of [the cross-border] projects [in Asia] could gain ground.”

Nicolas Mackel, chief executive of Luxembourg for Finance, a development agency, says the country’s status as an established asset management centre should ensure its growth despite competition. Luxembourg has often acted quickly to changing trends, he adds. For example, it was one of the first countries to allow retail mutual funds to invest in Chinese capital markets. “Asset management is the core part [of our finance industry],” says Mr Mackel. “It is and definitely will continue to be.” 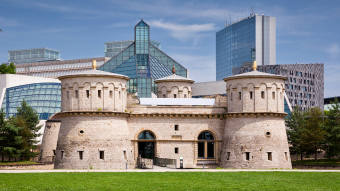