In one of his last interviews before he was detained by Chinese police, Meng Han appeared relaxed as he talked about his work as a labour activist.

“Our most important work is to help factory workers organise themselves so they can defend their rights,” he told the Financial Times last year. “The government rarely helps the workers. But as long as the workers don’t go to extremes, it will stay neutral.”

At the beginning of 2015, Mr Meng could feel reasonably confident that he inhabited, in the context of China’s rapidly evolving civil society, a relatively safe sphere. Labour activists, rights lawyers and academics believed that, so long as they did not challenge the ruling Communist party, they could operate without fear of official retribution.

Today, however, Mr Meng is spending his eighth month in a detention centre. He awaits trial on charges of “disrupting public order”, an offence that carries a maximum sentence of five years in prison. This month also marks the one-year anniversary of the round-up of dozens of rights lawyers. Most have since been released but the most prominent among them have been formally accused of state subversion — a charge punishable by life in prison.

The chill that has descended across Chinese civil society, especially over the past 12 months, has become one of the defining aspects of Xi Jinping’s presidency, alongside his own rapid consolidation of power over the party, government and military. As China’s most powerful party and state leader since Deng Xiaoping, Mr Xi has presided over a crackdown without precedent since the repression that followed the 1989 Tiananmen Square massacre.

Even academics and businessmen who thought themselves immune to politics provided they did not wade into sensitive areas are having to reassess their vulnerability.

“Since Xi came to power, China’s situation has become more and more worrisome,” says Murong Xuecun, a prominent author and commentator. “Things that we could openly discuss before, such as the Cultural revolution, are now considered sensitive or even forbidden. In the past there was some room for non-governmental organisations and rights lawyers. Now all of them have been suppressed.”

In an internal document issued just a month after Mr Xi became president in March 2013 and later leaked, the Communist party identified the very notion of civil society as “an attempt to dismantle the party’s social foundation”.

“Western anti-China forces and people with ulterior motives within China view civil society as a magic bullet for advancing social management at the local level [and] have launched all kinds of so-called citizen’s movements,” Document No 9 warned. “Advocates of civil society want to squeeze the party out of leadership at local level . . . their advocacy is becoming a serious form of political opposition.”

The belief that people who do not see themselves as challenging the party are nevertheless a threat to its rule has only intensified, especially in an environment where slower economic growth increases the risk of social unrest.

“The biggest threats to state security, in the party’s view, are those seen as posing a direct challenge to its narrative and concept of what China is,” says Samantha Hoffman, who researches Chinese social controls at the UK’s University of Nottingham. “Groups and individuals that have the potential to offer alternative visions of China are seen as a threat to the party state.

“That puts NGOs, journalists, activists, researchers at a much higher risk.”

Some elements of the “regression” that human rights organisations have lamented under Mr Xi’s watch were set in train by Hu Jintao, his predecessor. But Ms Hoffman says there has been a more methodical approach under Mr Xi through the recently approved national security and NGO laws.

“Under Xi Jinping the Chinese government is creating a more coherent legal framework to enforce preservation of the party-state,” she says.

“Xi reversed everything,” adds Hong Zhenkuai, a historian and former editor at Yanhuang Chunqiu, a traditionally liberal political magazine created by Communist party elders in 1991. “The party approaches public opinion management as it would a military battle. It is a shame. China’s print media is gasping for its last breath. The media environment is the worst it has been in 20 or even 30 years.”

Mr Hong quit Yanhuang Chunqiu in 2014, citing an erosion of its “democratic” culture. “The atmosphere was rather free and open,” he says. “We hoped it could uncover historic truth and help the Chinese people learn to think rationally.” Last week, Mr Hong’s former colleagues at Yanhuang Chunqiu halted publication of the journal after the Chinese National Academy of Arts sacked the publisher and demoted the chief editor.

Less than a year after Document No 9 was issued, Xu Zhiyong, a prominent civil society activist whose causes included fair treatment of migrant workers, was sentenced to four years in prison for allegedly “gathering a crowd to disrupt public order”.

In May 2014, Pu Zhiqiang, a leading rights lawyer, was detained ahead of the 25th anniversary of the 1989 Tiananmen Square massacre while Ilham Tohti, long regarded as a moderate representative of China’s largest Muslim minority group, the Uighurs, was sentenced to life in prison for allegedly advocating independence for his home region of Xinjiang. Mr Pu was released in December last year with a conviction and three-year suspended prison sentence that effectively ended his legal career.

These individual prosecutions were followed in 2015 by round-ups of dozens of rights lawyers and labour NGOs, the last of which netted Mr Meng, who only became a labour activist by accident. Originally, the 51-year-old was a riverboat pilot employed by a state-owned company in Wuhan, a large city by the Yangtze river in Hubei province. After he was laid off, he moved to Guangzhou in southern Guangdong and found work as a hospital security guard.

His involvement in a labour dispute at the hospital four years ago led to a nine-monthprison sentence and, after his release, a job with an NGO that helped workers who felt they could not rely on support from China’s only legally sanctioned union, the All-China Federation of Trade Unions. “Labour NGOs do a lot of the work that should be done by the ACFTU,” Mr Meng said at the time. “Basically all I do with other workers is share my own experiences with them.”

Mr Meng and other labour activists have long argued that their work, which is primarily focused on helping employees secure better terms and conditions at foreign-invested factories, is not only fundamentally patriotic but also aligned with the party and government’s own interests. They help defuse tensions before they spill out into the streets.

China’s small band of rights lawyers walk an even narrower line than their labour activist colleagues. As the party sought to build a modern, efficient court system — reducing the need for official intervention in all but the most politically sensitive cases — the lawyers believed they had a useful role to play. The authorities might have harboured extreme distrust for their dissident and activist clients but even in show trials, where the outcome is preordained, it is critical that the accused be seen to have had credible legal counsel.

In December, police rounded up Mr Meng and his colleagues at the Guangdong Panyu Migrant Workers Center. The charges against them related to their alleged “manipulation” of labour negotiations at a shoe factory, which was followed by a large strike.

“Labour NGOs in Guangzhou are under immense pressure,” says Zhang Zhiru, who runs a workers rights organisation in nearby Shenzhen. “They have been paralysed.”

At the other end of China’s social spectrum, its growing private sector was unnerved in December by the brief detention of one of its leading lights, Guo Guangchang, ostensibly to assist authorities in a corruption investigation that was not focused on either him or his Fosun Group conglomerate.

That sense of unease was heightened by the silencing of a prominent real estate developer and party member, Ren Zhiqiang, who dared to question the party’s grip on official media. When Mr Xi told state media organisations that they must “speak for the party”, Mr Ren dared to criticise the president’s comments on his personal Weibo account, which had 38m followers.

The action against Mr Ren reflected the authorities’ wariness of Weibo, the country’s Twitter equivalent that was once seen as a potentially liberating medium. Censors now seem confident they can use technology to suppress speech more effectively than civil society can use it to speak freely.

Mr Ren’s run-in with the party followed revelations about the apparently extrajudicial detention of five booksellers, at least two of whom were allegedly renditioned from Thailand and Hong Kong, which although a special administrative region of China is theoretically off limits to its internal security forces.

“My millionaire friends have been in shock ever since the booksellers’ incident because they were picked up outside China,” says one prominent Beijing-based businessman, adding that they no longer feel secure even when they have left the mainland.

A senior banker at a British private equity firm recalls his surprise at a recent meeting with five of his Chinese peers — “all money managers, serious amounts of money, impressive track records in Chinese equities and all looking to diversify away from China”.

In one sense, the Chinese money managers are simply part of the “great wall of money” flooding out of the country as the world’s second-largest economy assumes its place in the global mergers and acquisitions arena. But it was when the conversation took a personal turn that the British banker realised that his fellow dealmakers “were also looking to diversify their kids away from China — they all wanted to send them to study, work and settle overseas”.

“I said to them, ‘Why would you want to do that?’ And one of them said, ‘So they can be free’. This was the most accomplished money manager in the room!”

Many argue that Mr Xi’s far-reaching crackdown on civil society is short-sighted, dangerous and ultimately suggests that the regime is fundamentally weak and insecure, not strong and confident. “I don’t understand why the government doesn’t let people vent the way it used to,” says one former government official who has since left the country. “It relieves some of the pressure and you can see where the grievances are.”

In March, an open letter purportedly penned by “loyal Communist party members” suggested that the repression could have dire consequences for Mr Xi himself. The letter urged the president to resign “out of consideration for your personal safety and that of your family”. Even if not authentic, the letter highlighted a surprising new addition to China’s political discourse. For the first time in decades, people speak — albeit discreetly — about “assassination risk”.

Ordinary Chinese citizens whose day-to-day lives are entirely divorced from politics can also find the current climate oppressive, especially when contrasted with the civil freedoms and democratic culture in Taiwan, which Beijing deems a “renegade province”.

“It has been three years already. How much longer can [Xi’s] political campaigns go on for?” asks one middle-class professional in Beijing. “I feel like all of China’s dreams are being realised in Taiwan,” the woman adds, recalling how she and her young daughter watched coverage of last year’s landmark meeting between Mr Xi and Ma Ying-jeou, Taiwan’s then president, on state broadcaster China Central Television.

After extensive remarks by Mr Xi, it was Mr Ma’s turn to speak — at which point CCTV cut the feed.

“My daughter asked, ‘But there were two men, why is only one of them talking?’” the woman recalls. “If a child can ask that question, shouldn’t everyone be asking that question?” 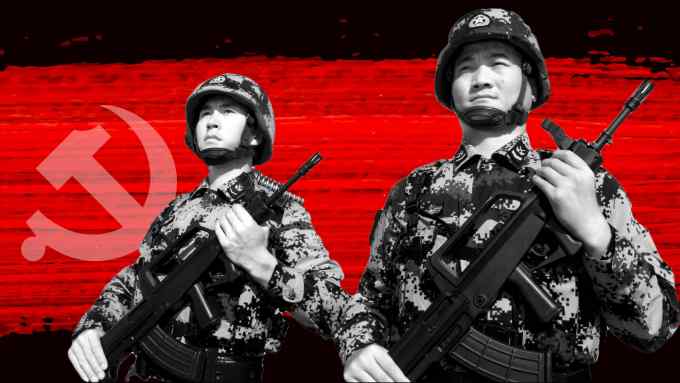