Salehe Bembury is the sneaker-whisperer

Meet the man behind the world’s hottest shoes

“I’m in a nine-and-a-half-hour queue to check out,” read a WhatsApp message last summer from a friend. He was trying to get his hands on a pair of tangerine-coloured Crocs. A few minutes later, another text. “Scratch that. Site crashed.”

That a pair of $85 rubber slingback clogs ignited such an online frenzy might seem incredible to some. Ordinarily they’re worn by chefs, gardeners and kindergarteners. But these Crocs were the handiwork of 36-year-old Salehe Bembury, the New York-born footwear designer behind sell-out sneakers at Versace and Yeezy. He turned the clog’s signature chunky shape into a three-dimensional rendition of his own thumbprint, to look completely sci-fi, and today the shoe garners resale hikes of up to 400 per cent on StockX. According to Crocs, the shoe had the brand’s fastest ever sell-through and engaged a customer “who had not considered Crocs” before.

“It was a first for me, and a first for Crocs,” says Bembury, who is not yet accustomed to his front-of-shop status – he’s an independent designer who has become a brand in his own right. In September, 400 people stood in line for a meet-and-greet at a Crocs event. “In my head, I’ve always been a hired assassin… I never saw myself as someone who puts his own name on things.”

Bembury, who lives in Los Angeles, is a trained industrial designer who began his career in 2009 at multibillion-dollar American mass-market brand Payless, which sells $15 sneakers. From there, he hopped from in-house gigs at Cole Haan and Greats before landing a job at Yeezy to design men’s footwear in 2015. There he helped to mastermind the Boost 350 V2 and Boost 750 styles.

He describes his work as a “love letter to sneakers”. Growing up in New York, as a kid he waited in lines excitedly for shoes, and delighted in them for their ability to “make you feel like you were cool, that you could get the girl, or dance better”, he smiles. “They always made me feel special.”

In 2017 he started working at Versace; his debut sneaker, the Chain Reaction, turned the Italian house’s jewellery signatures into a sculptural sole. Then New Balance approached him for a collaboration, which he did while still working at Versace. “He walked us through this whole 100-page storytelling deck of what his vision was,” says James Lee, a senior footwear designer at New Balance. It included a tale about how he got lost on a hike in Los Angeles, and how he wanted to create a shoe to combat this. “At the end, he pulled out this 574 sample and blew into the heel and it made a noise… he’d hot-glued a whistle to it,” laughs Lee. “We were all sitting there like, ‘Woah, what on earth just happened?’” New Balance decided to invest 18 months into prototyping Bembury’s musical design. It became the 574 Yurt, an urban-looking trail shoe with a rock-shaped sole – and a functioning emergency whistle. It sold out.

HTSI
Be the life and sole of the party 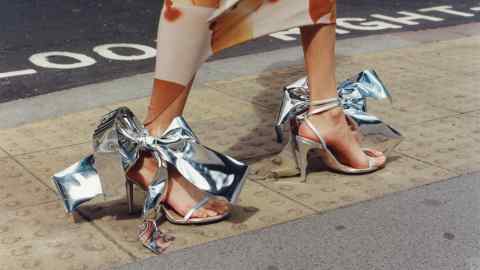 Bembury’s name is rare in an industry dominated by heritage labels. Famous sneaker designers such as Tinker Hatfield at Nike “tend to [remain] working in-house”, says Jack Stanley, a consultant and former senior editor of Hypebeast. Bembury has become visible because his signature is unique and his references broad-ranging, with an aesthetic that sits between The Magic Roundabout and Monsters, Inc, set in a colourful, space-age version of The Great Outdoors. “Brightly coloured, nature-inspired, futuristic footwear might sound niche,” says Stanley. “But Bembury has tied it together into a coherent look. It’s wearable, with just enough weirdness.”

Bembury has since cultivated a loyal coterie of fans – more than half a million people follow him on Instagram – and since quitting Versace in late 2020, he’s released further sneakers with New Balance and Vans, clothing with Canada Goose and cushions with Studio Proba. He has even turned down Nike. All without actually launching a namesake brand. He does, however, have Spunge, his own retail site where he plans to drop his own products and collaborations. “It’s really an opportunity for me to make whatever I want,” he says. “If I want to make a chair, it’ll make sense.” He says there’s “no game plan”, but he knows his audience is “curious and interested… I just want to have a dialogue with them.”

Who knows which path he’ll tread next. But one thing’s for sure: sneakers are just his first ascent.