Pioneers use tech and data to change the way we do business
October 23, 2019
Print this page
Experimental feature

The 10 people profiled here have all played a leading part in creating the world of today . . . and tomorrow.

They include a mathematician, a telecoms expert, a serial entrepreneur, a former dentist and a Detroit college dropout.

Each one of them has seen an opportunity to use technology to change the world of business — and seized that chance.

The judges decided that Tim Cummins is the person who has had the greatest effect in shaping a new market.

They were impressed by how Mr Cummins, at the start of his career, made himself heard by using data to present the case for industry-wide standards of contract management.

He founded the International Association for Contract and Commercial Management in 1999. The network has defined the role of contract managers as well as the process of contracting within leading corporations.

Tim Cummins is a self-taught commercial contract manager who has negotiated deals in the automotive and aerospace industries. He is a professor at Leeds University School of Law — even though he has never trained or practised as a lawyer.

In the 1980s and 1990s, Mr Cummins led the development of business offerings and negotiations at IBM. He soon realised that an overhaul was required and set about creating market-friendly commercial contracting practices. However, as a comparatively junior employee he had little access to decision makers, so he collected data to make his case and set up a cross-industry, customer-focused benchmarking group.

Mr Cummins went on to co-found Global Executive Business Services, and in 1999 he set up the IACCM, a not-for-profit network. Today the association has 60,000 members, representing 20,000 organisations. It sets standards for contract management and provides training and certification in best practice.

Before the IACCM began, few people recognised commercial contracting as a profession but it has defined the role of contract managers and raised the profile of the process of contracting within major corporations.

He was one of the first people to be convinced of the importance of data to the sector and to work out ways to harness it to create value for clients.

Mr Datoo’s London company started as a one-man consultancy and it now employs more than 100 people.

Mr Datoo sits on the technology and law committee of the Law Society and is author of the book Legal Data for Banking — Business Optimisation and Regulatory Compliance.

After studying telecommunications engineering in Madrid and Stuttgart, Coty de Monteverde spent the first decade of her career as a consultant, first in telecoms and then in financial services.

Since joining Santander in 2008, Ms de Monteverde has worked on blockchain applications across the financial industry.

Her work has involved shifting the focus of blockchain initiatives at the bank from proof of concept to production. She leads Santander’s blockchain centre of excellence and has changed the perception of blockchain within the company by showing its business value.

Her work has resulted in Santander becoming a founding member of various blockchain initiatives nationally and globally.

These include Alastria, the world’s first regulated blockchain ecosystem; Fnality, which aims to bring blockchain to the world’s wholesale banking markets, and the Enterprise Ethereum Alliance, which focuses on setting out open blockchain standards.

A mathematician and accountant, Poppy Gustafsson discovered her passion for start-up businesses while working in venture capital.

When she co-founded Darktrace, she brought together Cambridge university mathematicians and professionals from GCHQ, the British government communications headquarters, to turn their ideas into a business. Six years later, Darktrace has an annual turnover of $1bn.

One of the game-changing moves made by Ms Gustafsson and the Darktrace team was to understand, and persuade society to accept, that cyber security breaches are inevitable. Unlike other cyber security businesses, which defend the perimeter of organisations, Darktrace acts as a security camera looking at the inside of the business.

Ms Gustafsson says the company owes its rapid growth to its willingness to challenge the status quo. For instance, she suggested that Darktrace recruit talent from social sciences and arts backgrounds — unusual for a technology company — and the move has resulted in a workforce that is 40 per cent women.

Born in South Africa, Paul Hirner worked as a dentist in Britain before moving to California to found his first technology company.

In 2013, he used his experience in software development and building start-ups to found ThinkSmart, a no-code, automation platform to manage business processes. That company was bought by Mitratech last year, and Mr Hirner launched SimpliGov to enable the public sector to share the benefits of the digital transformation that is under way in business.

SimpliGov has been used on a range of projects, from automating the trademark applications for the secretary of state in California to unifying social and healthcare provision in Sonoma County, California, It has also worked on the automation of forms that enable public servants to declare their financial records and so avoid conflicts of interest.

SimpliGov has been used across numerous projects to improve efficiency in the public sector and the all-round quality of public services.

Leanne Kemp is founder of Everledger, a start-up using blockchain, artificial intelligence, near-field communication and the internet of things to create more ethical supply chains for products such as diamonds and wine. Founded in 2015, Everledger seeks to improve transparency and confidence in the global markets for high-value products.

Ms Kemp is in her second term as Queensland’s chief entrepreneur, supporting the development of the state’s start-ups. In addition she co-chairs the World Economic Forum’s global future council for accelerating sustainable production and is a member of the Global Future Council on blockchain. Ms Kemp works to understand the social and environmental effect of what is being called the fourth industrial revolution, and how to create healthy economic growth.

Andrew Mellett is neither a lawyer nor a software engineer but through his career in corporate advisory he developed an understanding of the value of legal services in business — and realised that the relationship was not designed to optimise value.

In 2011, Mr Mellett founded Plexus Legal in Australia as one of the earliest virtual law firms, with a combined offering of lawyers, technologists and engineers. He was a leader in what was to become known as “new law”.

With Plexus Legal he created a model that came to disrupt the Australian legal sector by offering services that were fast, cheap and high quality — a combination that others found hard to beat.

In 2019, Plexus launched a strategic global partnership with KPMG. The multinational accounting firm was one of the major investors in a series-A funding round of $4.65m, and the partnership will see KPMG offering legal services in conjunction with Plexus’s technology offering.

As a non-lawyer, Mr Patel was an unlikely founder of one of the very first successful legal technology companies but his time as a dealmaker made him realise the inefficiencies in the way that documents were handled in big transactions.

In 2001, he set up HighQ, believing that the legal profession needed to become better at handling mass documentation and data. It took six years for Mr Patel to win his first client. Now, HighQ serves more than 400 customers, including over half the global 100 largest law firms. The company was recently sold to Thomson Reuters for £365m.

HighQ was one of the first legal technology companies to offer software as a service and insist on delivering the product through a secure cloud-based platform.

Mr Patel expanded HighQ’s suite of software and it became a leader in collaboration technology for the legal and regulatory market.

For Thomson Reuters, HighQ is a key part of its drive to become a platform business, through which it can connect customers and suppliers with its other tech products.

Andrew Sieja, a college dropout from Detroit, founded KCura in 2001 after working as a computer programmer for multinational companies and consulting firms.

The demand for the product led Mr Sieja’s team to shift its focus solely to Relativity, and the company changed its name to reflect this. Relativity is now valued at more than $1bn and it serves most of the top 200 US law firms. Now based in Chicago, the company is a global technology brand as well as being a key player in the city’s technology ecosystem.

As executive chairman of Relativity, Mr Sieja is a leader in the field of ediscovery. His platform prizes collaboration, integrates with other software and provides a one-stop shop for ediscovery.

Ram Vasudevan first used a computer in the mid-1990s when he took at job to make money while studying for his MBA at Cornell University, New York. A willingness to try new things has helped shape his career. After a decade working in private-practice law firms on corporate transactions and mergers, he decided the process could be more efficient.

In 2004, Mr Vasudevan founded QuisLex, one of the first legal process outsourcing companies, to tap into demand from corporate legal teams for cost-effective legal services.

He quickly realised that to win over the sector, he had to offer services that would match the highest industry standards.

Initially framed as a low-cost alternative to law firms, QuisLex now offers end-to-end business solutions, working with partners and in-house counsel as an extension of their teams.

The business has helped clients automate non-disclosure agreements and other simple contracts, and recently developed a data strategy for large-scale AI-powered document review. 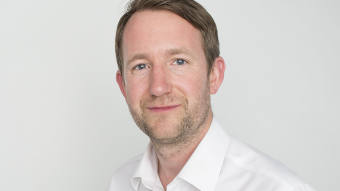