How Lisa Schiff is disrupting the art advisory business

The New York-based art adviser Lisa Schiff does not do things by halves. When I call her, it is early morning in Manhattan and she is in the throes of sorting through and packing up her worldly possessions before moving to a new apartment in the hip neighbourhood of Tribeca.

“It’s so emotional,” she tells me down the phone. “It’s the first time I’ve moved since having my son and I’m finally clearing out things I’ve dragged around for years but felt too guilty to get rid of.”

The relocation also marks a professional turning point for Schiff, who has been negotiating on behalf of clients to acquire works and build their collections since she launched her firm SFA Advisory in 2002. On May 29, on nearby White Street in Tribeca’s Cast Iron district, she is launching her very first space. It will combine her existing advisory firm (and retain its name), exhibition venue — complete with a programme of shows and openings — and concept store.

It is an unprecedented move. For the most part, gallerists are de facto advisers, but few — if any — advisers open galleries. Schiff is adamant, however, that her new venue (“more living room than white cube”) is not a gallery. Crucially, she will not represent artists, although she will sell secondary-market pieces, as well as limited editions and design objects, some of them commissioned through her new art production company, One All Every. Works from her own collection will be hung salon-style among those being marketed.

Schiff says the main impetus for opening a space came from the need to sell works acquired by her clients years ago, many of which may have been hidden in storage ever since. “The sheer volume of art fairs, auctions and gallery openings means we are presenting clients with works every day. There comes a point at which there’s a purging,” she explains.

Particularly without a physical platform, private dealing is not always easy — or lucrative, Schiff adds. “It’s not about the margins. I don’t care whether I make £5,000 or £50,000. Selling a work of art is really hard. It’s not like there are 100 people lining up, there’s maybe one person out there.”

For the other 99 per cent not in the market for a six-figure secondary market piece, Schiff aims to cultivate a cosy, welcoming space in which they can “come in, sit down and talk about art”. Split over two storeys, and designed by the interiors firm RP Miller, the ground floor will feature floor-to-ceiling bookcases and a “living wall” of growing plants created by the Brooklyn-based artist Gennaro Brooks-Church, creating a homely environment to house bespoke furniture. A different curator will be appointed every year to “programme” the ground-floor window display.

Selling a work of art is really hard. It’s not like 100 people are lining up, there’s maybe one out there

Keen to build a new client base, as well as service her existing pool of collectors, Schiff is mindful of retaining an element of discretion. She is installing a phone booth so clients can make private calls and plans to hang a sign in the window that reads: “Open mostly by appointment, but try us”.

In recent years, Tribeca has been transformed into an art-world thoroughfare, with galleries relocating there including Postmasters, Andrew Kreps and Bortolami. Many have been forced out by the rampant redevelopment of Chelsea, where mega-dealers such as David Zwirner and Pace are erecting museum-scale spaces. Schiff says she is keen to engage with the local community, offering to hang works from other galleries in her space.

The relative tranquility of Tribeca has also attracted Manhattan A-listers over the years, among them Robert De Niro, Meg Ryan and Leonardo DiCaprio, who was until recently one of Schiff’s clients.

“I miss him, but it’s a full-time job,” Schiff says, pointing out that having a space means she will have to cut back on travel. Her sustainable company One All Every — which will benefit NGOs — was largely inspired by her work with DiCaprio, who has poured at least $30m into his own charitable foundation to fight climate change.

As galleries are being squeezed by the spiralling costs of rents and art fairs, as well as the growing dominance of auction houses and online sales, they are increasingly experimenting with other models. So how does an art adviser fit in to this shifting landscape?

“People are getting creative about how they are staying in business and keeping their programmes going, so it’s no surprise to see something like this, although it’s new territory for an art adviser,” observes Heather Hubbs, the executive director of the New Art Dealers Alliance (Nada). “The question is: how sustainable will it be, and whether it will help fix some of the problems galleries are facing.”

People are getting creative about how they are staying in business, though it’s new territory for an art adviser

Historically, art advisers have been discouraged from holding inventory or acting as private dealers, so does Schiff’s venture pose a conflict of interest? Amalia Dayan, co-founder of the New York and London gallery Luxembourg & Dayan, thinks not.

“In the art world, we love to say that everything is a conflict of interest, but so what? It’s time to refresh the art advisory model. Twenty years ago art advisers didn’t really exist, dealers worked with clients on what to buy and concepts for their collections,” she says.

“Over the past 20 years, the role of the objective adviser versus that of the dealer has become too rigid, but that’s beginning to loosen up. The idea of extending the conversation and getting more people to experience art can only be a good thing.”

Schiff is quick to stress that she does not intend to disrupt current art-world models. “I care deeply about the eco­system [of the art world] and am beyond reverent to the gallerists, art fairs, museums, curators and artists,” she says. “We are all in this together and integrity and qualitative value must be upheld and argued for.”

Opening the space, she adds, is ultimately about “stopping the circus and taking time out to think”. It is a predicament many in the art world can relate to. 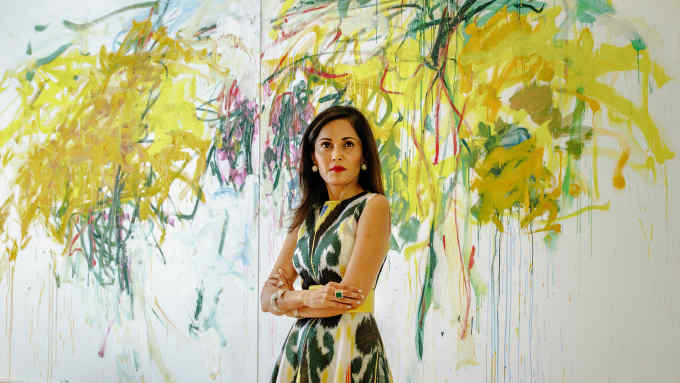