Can an MBA help build a career in property?

Even as a child at school, Aaron Bothner had a passion for property. “My parents were thinking of moving home and I went with them to look at houses and work out how they were priced,” he recalls.

“Real estate fascinates me because it’s living history,” says Bothner, 33, now a vice-president for real estate acquisitions at Wafra, a Kuwaiti state-backed investment firm in New York City. “Every building represents a confluence of what happened in the past and where people envisioned the future.”

An MBA at Georgetown University’s McDonough School of Business, Washington DC, in 2014 helped lay the foundations of his career in property.

Land and property is a relatively young mainstream asset class, which took off in the late 1990s. As a result, Bothner says, the industry cannot match the large hiring of MBA graduates seen in sectors such as management consulting.

Yet a growing number of professionals are studying MBAs to build careers in real estate. While the industry is vulnerable to economic downturns, it is also seen as a sector where students can leave a legacy, for example by designing or investing in sustainable buildings.

Faculty predict an increase in demand. UNC Kenan-Flagler Business School in North Carolina expects to enrol up to 50 MBA students on its property elective for the 2019-20 academic year, up from 33 the year before, says real estate professor David Hartzell.

This reflects “one of the best job markets for MBAs in many years”, he adds. Institutional capital has flooded into real estate since the 2008 financial crisis, with investors searching for yield amid low interest rates. This has created more jobs in development, lending and investment, says Prof Hartzell.

Bothner took classes in a range of topics from valuation and transactions to risk management at the Steers Center for Global Real Estate at Georgetown. This did not just give him a strong theoretical foundation, the school’s network also proved invaluable for providing him with career opportunities.

“A lot of hiring in real estate happens from word of mouth, or the candidate doing research,” he says. A recommendation from a professor helped Bothner secure a summer internship that led to his current job.

Jack Ryan, who enrolled on a property elective during his MBA at UNC between 2018-20, also used the hands-on experience of the course to build contacts.

Ryan was one of several MBA students at UNC who were given the opportunity to manage one of the school’s three real estate funds, under the watchful eyes of professors. It is more than an academic exercise: the inaugural fund, which launched in 2007 and closed in 2018, was among the best performing in the US of that vintage, according to Hartzell.

As a co-manager of the current fund, Ryan uses the money raised from outside investors to acquire, develop and sell properties. As with Bothner, the network which has evolved has been invaluable, Ryan says, in this case leading to discussions about a potential job opportunity with one of the partners he worked with.

But he warns that students who want to land a job quickly to recoup their tuition fees may need to hold their nerve to get into property. Job offers are often sent out as late as May for summer positions because companies hedge their bets against a potential downturn in a cyclical industry with peaks and troughs.

Competition for talent means pay for real-estate MBA students has risen, according to Hartzell. He says the average salary for those who graduated in 2019 was $116,000, up from $110,000 for the 2016 cohort. This may not reflect full remuneration, either: Prof Hartzell adds that salaries in real estate are typically discounted because people also get equity in deals or in private equity funds.

With such prospects, schools are keen to adapt course content to industry demands and individual institutions tend to focus on a specific aspect of real estate.

When the Wharton School of the University of Pennsylvania launched its real estate major in 1985, it focused on mortgage lending. A new course on disruption in the property sector was added in 2019 to help students respond to current market conditions.

Guest lecturers and faculty talk about innovation, such as crowdfunding, and encourage students to think of ways to apply it to real estate. Historically, it has been difficult for tech innovations “to get traction”, says Todd Sinai, chair of Wharton’s real estate department, so such lessons are seen as being essential.

Other schools focus on sustainability. In 2019 Tulane University’s business and architecture schools launched a joint MBA and sustainable real estate development degree in New Orleans. Student Neal Talaske, 28, says he took the course because he is concerned about climate change and wants to be part of the solution. “There’s huge potential for designing buildings that are more energy efficient, for example, or resilient to extreme weather,” he says.

There are examples of this in New Orleans, which was devastated by hurricanes in 2005 and is being rebuilt sustainably. Talaske cites a condo building where the entire ground floor can retain flood water. “There’s an air of resilience about the city. People refuse to be overcome. That’s inspiring,” he says. 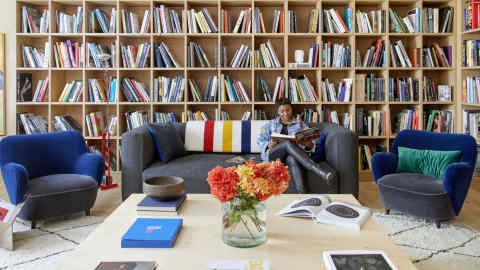 UC Berkeley’s Haas School of Business emphasises financial rigour — students learn about the “capital stack”, or layers of funding for a real estate development, in a certificate course that is also taught by Berkeley’s schools of law and environmental design.

“One reason for the [2008] crisis was the fact that many people had absolutely no idea what they were investing in,” says Nancy Wallace, chair in real estate capital markets at Haas. She says losses were magnified because complex credit products were backed by subprime mortgages.

In the event of another downturn, students who work for real estate developers or lenders are at risk of losing their jobs, warns Lahlou Khelifi, a real estate finance lecturer at Insead business school. But he says those who work for institutional investors will likely see their jobs evolve rather than dissolve — they may become focused on debt restructuring or recovering nonperforming loans, for example.

Matthew Cypher, director of the Steers Center, adds there will be jobs in acquisitions too: “In a recession, if you have money, you’ll be feasting on assets with low prices. As Warren Buffet says, ‘be fearful when others are greedy and be greedy when others are fearful’.”