Start a 4-week trial
Makers and creators: guest edited by Jony Ive
See all 13 stories
How To Spend It  Style

The mother and daughter florists who conquered Silicon Valley

There is only one place to start a business in Silicon Valley: the garage. Ever since Bill Hewlett and David Packard founded their multinational IT company in a Palo Alto garage in 1939, the tech world has had a thing for them. They feature in the early days of Microsoft, Apple and Google, while Hewlett-Packard’s original outhouse hub has been designated an official California Historical Landmark.

Iranian-born Nasrin Assadi moved from her home in France to the San Francisco Bay Area in 1998 with similar aspirations, but it wasn’t tech that she had in mind. “I wanted to do flowers,” says Assadi, now a spirited 70-year-old. “I had never found good flowers in Palo Alto. They were all a bit tacky – odd colours mixed together with no harmony.”

Inspired by the French style of floristry, Assadi took classes in Paris before moving to the US, found a job with a florist in Palo Alto (“at first sweeping the floors”), and then set up her own business. “I started out with a friend and we used her garage,” she recalls. “But her goal was to play around, and mine was to make money. She was supported by her husband financially. I wasn’t. So I rented a garage myself and that’s how La Lavande started. We became busier and we expanded regularly until we got here.”

Today, the business is run by Assadi’s daughter, Morvarid Mossavar (known as Momo), from a 170sq m warehouse about 20 miles south of San Francisco in the city of San Carlos. “It’s amazing what my mom did,” says Mossavar of her mother’s journey. “My family moved to France from Iran in 1980. So my mom and dad made a whole new life in Paris in their 30s. They ran two Apple dealerships, which is kind of funny when you end up in California and one of your biggest clients is Apple. My mom was 45 when she moved to Palo Alto – the same age as I am now – and she started all over again.”

The business grew organically by word of mouth, landing contracts with local hotels and winning the loyalty of some of Silicon Valley’s most high-profile names and companies. “We grew so fast that my friends were like, ‘If you were in tech you would be IBM by now,’” Assadi laughs. She attributes her popularity to her “different-for-California” style. “My eye was trained in France. We never made arrangements that were just purple and yellow, or red and blue; it was always a more tonal colour scheme.”

For Mossavar, working with her hands and playing with colours remains the best part of the job. “I go to the flower market two or three times a week,” she says. “I make my paintings there, deciding what elements I’ll put together. Every week you start with a fresh canvas. And every week you have to create something different, as the flowers change.” Springtime favourites of hellebores, Icelandic poppies, ranunculus and flowering quince are now giving way to cherry blossom, tulips and sweet peas. Meanwhile, some of Assadi’s best-loved components are those that remind her of her native Iran – such as tuberose, “with its heavenly smell”, or jasmine.

“Sometimes I dream of making an arrangement just with leaves,” says Mossavar. “That’s how you start an arrangement, and it’s also so pretty when it’s just green, but you can never send that to a client’s home.” While the harmonious colour palette remains a constant, the style of La Lavande’s arrangements has shifted over the years. “Twenty years ago it was all about compact, structured arrangements in a vase,” says Mossavar. “Now we have a natural, whimsical, more airy and playful style.” 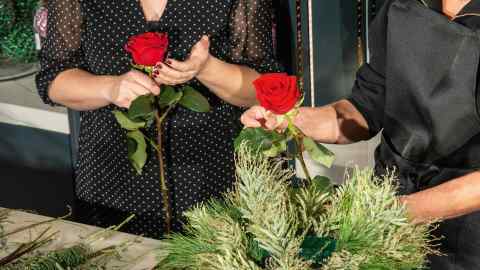 The artistic approach to floristry has bloomed internationally over this time frame, with the striking arrangements and installations by the likes of Simone Gooch of Fjura in London, Ruby Barber of Mary Lennox in Berlin, and the exuberant on-street “flower flashes” of Lewis Miller in New York finding an enthusiastic audience on Instagram. For Mossavar, however, her floristry influences – and subsequent friendships – have always been more local. “There’s now a really beautiful community of florists here in the Bay Area,” she says, adding that the two people whose work she is constantly inspired by are Ariella Chezar – a former local who has set up a sustainable flower farm in upstate New York – and Max Gill. “He’s a magician with his hands,” says Mossavar. “There are moments when I’m making an arrangement and I’ll be channelling Max. I’m like: ‘I’ve got to make this like you do.’ I can’t, though. He’s brilliant.”

For someone so enthused about her work, it’s hard to believe that Mossavar was initially reluctant to be part of La Lavande. “I didn’t want to join my mom at all,” she laughs, recalling her mid-20s when she was studying International Relations at San Francisco State University and dabbling in photography. “My mom tried to get me into the business for a long time. I would help out, do deliveries, but I was like, ‘I’m not touching flowers, don’t talk to me about working for you.’ But moms know how to get what they want!”

It was only when she was first shown how to make an arrangement and had a go herself that something clicked. “I just loved it from the beginning,” she adds. “Creatively, I’m happy doing what I do every day. My mom has handed me something amazing.”

Although Assadi retired six years ago, she still helps out with the administrative work. “The running of the business is all in Momo’s hands now,” says Assadi. “She’s developing it in a fantastic way. Her designs are much more beautiful. Plus she’s making more money than I ever made.”

“I worried constantly for the first year that I was going to sink the whole business,” says Mossavar. “I think people would be surprised at how it’s still a small family concern, given the clientele that we have and the events we do. But I reply to almost every email. I know all my clients’ names.”

How To Spend ItMakers and creators: guest edited by Jony Ive
Maison Bonnet: behind the making of the world’s most recognisable eyewear 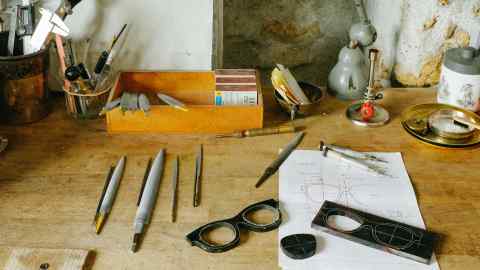 As well as designing spaces for dinners and events for corporate and private clients, Mossavar also plans to expand the range of La Lavande workshops, catering to a growing appreciation for handcrafts. “It’s an opportunity to get all these people who work in tech and spend all day in front of a screen to come and just play,” she says. “It could be taking a ceramics class or a flower-arranging class or starting knitting or doing punch-needle embroidery.” The point, she concludes, is that we all need to disconnect. Even if you’re doing it while sitting in a garage.